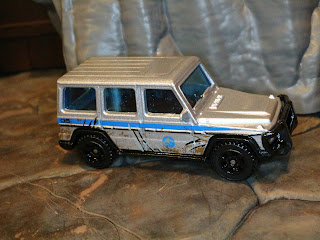 Today I'm looking at another vehicle from the Walmart exclusive Battle Damaged Jurassic World vehicles, and this time it is the '14 Mercedes- Benz G 550 that Owen and Claire drive through Jurassic World while they're looking for Claire's nephews. This set seemed to show up at Walmart last month to coincide with the release of Jurassic World: Fallen Kingdom on home video and each vehicle in the set is also available as part of a battle damaged 5-pack version of the Island Transport Team set that was originally released in late spring. Let's take a quick glance at this one after the break... 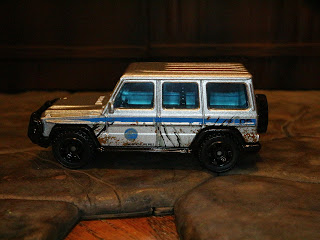 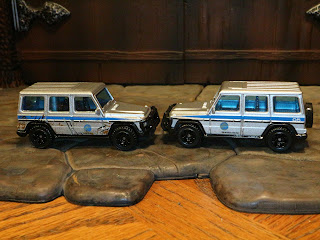 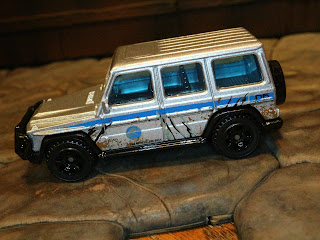 * I do like the new paint applications on these. I've never been much of a toy car collector beyond the occasional Hot Wheels Batmobile or Ecto-1 so painted details like this definitely appeal to me. The damage is truly just cosmetic (so no change to the actual model) but it looks good and just seems more exciting. 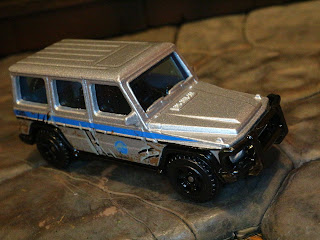 
* It does drive me a bit crazy that, like the Textron Tiger, there is no battle damage on the hood or the rear of the car. Some mud splashed on the hood or some claw marks on the back would have really made the day here. 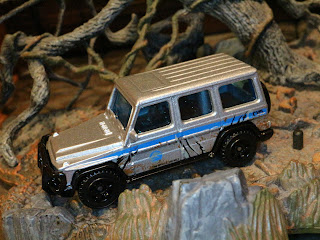 The Battle Damage '14 Mercedes- Benz G 550 is still a really nice vehicle and the paint work does make it a bit more interesting. It's definitely a cool variant, although I wish the damage was more spread across the vehicle rather than just on the sides. Still, for a buck this is a Great vehicle and definitely a well made toy or collectible. These seem to be Wal-Mart exclusives so that's where you need to go to pick one up!