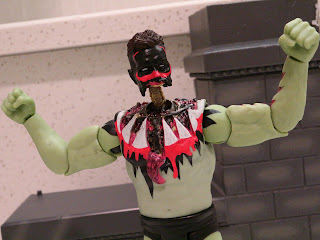 Since I found series 3 of WWE Zombies after I had already finished writing all of the reviews for The Revenge of 31 Days of Toy Terror you can consider these as bonus reviews to ensure you have an extra super spooky October!  Today I'm checking out the WWE Zombies Finn Balor. Finn is easily one of the five greatest professional wrestlers wrestling today and he's also one of my favorites. While Finn Balor by himself is still a worthy opponent, when Finn takes on the identity of the Demon King things get crazy. If you've never seen his entrance into a WWE ring, you need to check it out. Already being a bit of a horror themed wrestler, Finn is a natural fit for the WWE Zombies line (he's already been in the WWE Mutants line, too!). Let's check out this crazy looking guy after the break... 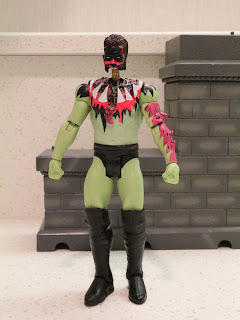 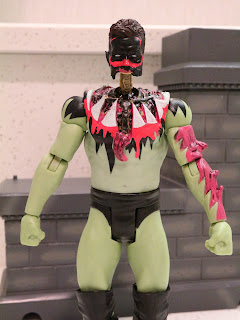 * I'm really quite a fan of this line and I love how we sort of get two different types of zombies in it. Some of these wrestlers just look like your regular zombie with moderate amount of damage. They'd fit in easily with any 6-7 inch scale zombie display. Others, though, look like mysterious, undead revenants with arcane powers. That's the vibe I'm getting from Finn Balor here. While he's "dressed" in his Demon King attire, he's also missing lots of flesh around his chest (basically, the "teeth" separate his torso from muscle and bone). He looks really creepy and quite shocking for a mass market toy! 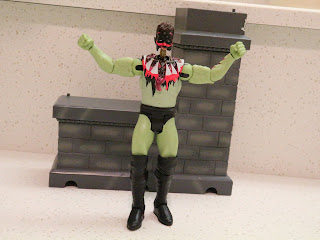 * Like most of the other figures in this line, Finn Balor uses the "Basic" articulation scheme. That's OK, though, as these are still really well designed and very well articulated figures. The biggest missing feature is the hips as I don't think the torso joints would help these; the cool, uniquely sculpted torso damage would probably be missing. Finn is sturdy and ready for lots of zombie wrestling action. 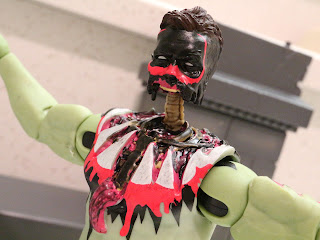 * The headsculpt is really cool here. I mean, this is just one of the craziest things I've ever seen on a toy. Yeah, the head looks like Finn Balor in his Demon King make-up but the fact that the lower jaw is missing, attached only to his torso by his spine, is pretty groovy. Holy smokes. Can you imagine just stumbling on this guy at Walmart! This is seriously a crazy looking zombie! 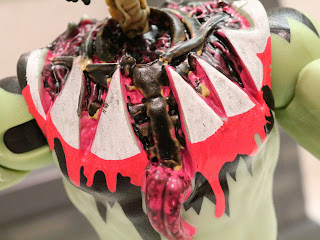 * Zoom in a little closer to Finn's sternum and such and you can see charred black bones underneath. Hey! That's a rib cage! And is that tongue....a real tongue? Yikes! 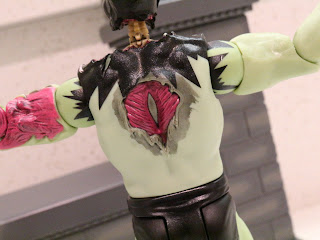 * Turn Finn Balor around and you can see a severely damaged spot on his back. Check out those muscles, folks! 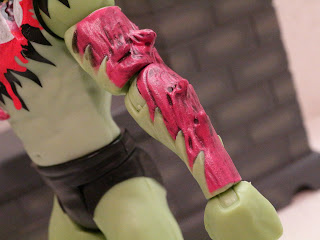 * Finn Balor's left arm is savagely ripped open! Man, this guy really took some damage, didn't he? He must have been in the ECW zombie league or something. 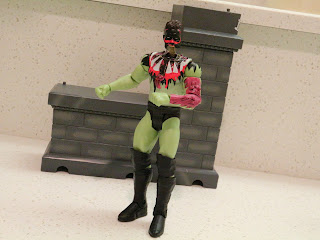 I really, really like the WWE Zombies line. It's something fun and creepy to look forward to that's a treat for WWE fans who are willing to have a bit of the macabre injected into their toyline or just a treat for zombie fans who dig action figures as zombie action figures just aren't as prevalent as you might think. Thanks to his excellent design and really cool paintwork, Finn Balor is another winner in this line. He's a Great and a 1/2 entry in this line and another stellar WWE Superstar given the zombie treatment. For Series 4, let's hope Mattel gives us zombie versions of the New Day. Who do you want to see as a zombie? Let me know below!


If you're interested in Finn Balor, check out my reviews of the Elite 41 Finn Balor or the WWE Mutants Finn Balor.