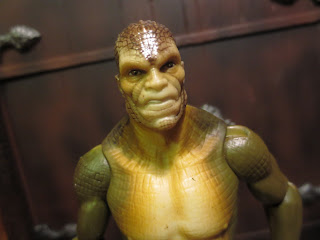 Today I'm looking Killer Croc (or just Croc, as the package calls him), the Build-a-Figure from the Suicide Squad subset of Mattel's DC Comics Multiverse line. Croc is one of the core team members in the film and a decent choice for a Build-a-Figure (well, Collect & Connect as Mattel calls them) due to his bulkiness. Croc was played in the film by Adewale Akinnuoye-Agbaje and I thought he was one of the high points of the film. Suicide Squad seemed like a pretty divisive film, but I really liked it and I was a sucker for the toyline. While a number of more high end companies like Mezco, DCC, Bandai, and Medicom are planning to release figures from the film, Mattel got theirs out first and struck while the iron was hot. I managed to pick up every 6 inch figure in this line except for the SDCC exclusive 2-pack of Joker and Panda Man, so I was able to build the Ultimate Croc. Like with  Batman's Grapnel Blaster from the Batman v. Superman line, Mattel included some variant parts with the retail exclusive figures. You can build a standard shirtless Croc if you pick up the 6 main figures, but if you add on the two Toys 'R Us exclusives and the Amazon exclusive Harley Quinn you can add on Croc's hoodie and jacket. I have all nine of those figures, so that's what you're seeing today. Ready for a closer look at Croc? Then join me after the break... 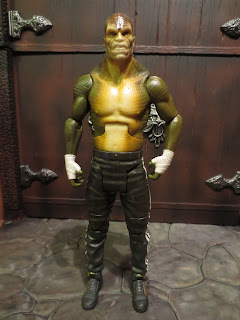 Non-Scalper Price: N/A- He's a build a figure and you'll need Batman, Boomerang, Deadshot, Harley Quinn (6 inch), The Joker, and Katana to build the standard version. The add on pieces for "Ultimate Croc" come with Harley Quinn (Gold Dress), the TRU Harley Quinn, and the TRU The Joker. 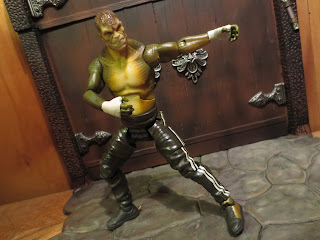 * While Croc's articulation model isn't any different than any other Suicide Squad figure, he does have the advantage of a better range of motion on his joints and an unobtrusive outfit. Heck, he even moves pretty well with his jacket on, too. His head also has a really good range of movement. Some hinged or rocker ankles would have been killer, but what Croc has is pretty adequate. 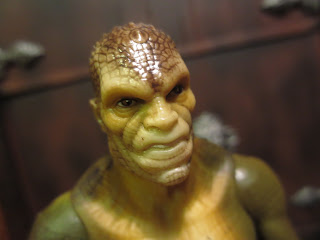 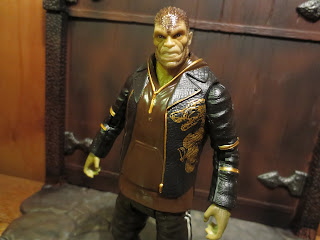 * When you put Croc's jacket and alternate arms on him, he actually looks pretty impressive. This is definitely my favorite look for him as I like the layered appearance and the colors of his jacket. The leather pattern on the jacket is quite nice; Mattel did a good job on the texture. 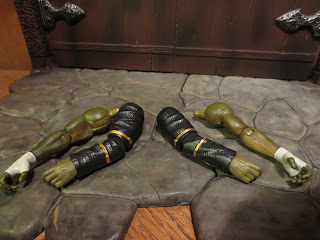 * To help make the chance Croc comes with two sets of arms. What's really nice is that these arms swap easily, allowing you to change up Croc's look as you see fit. I was concerned about how this was going to work the first time I put the shoulders in the sockets but everything turned out A-OK. 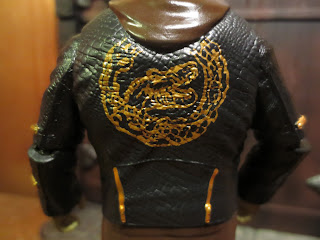 * This design on the back of Croc's hoodie is actually pretty cool. The Suicide Squad figures feature a plethora of unique prints and patterns and Mattel did a very admirable job of getting them applied neatly on the figures. 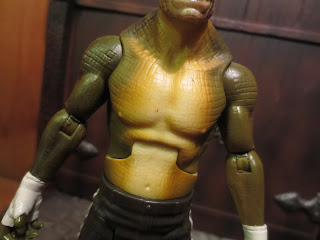 
* Croc's torso just seems too underdetailed for a newly sculpted build-a-figure. The scales are really soft and just kind of blend in. He also looks far too slim. Movie Croc is much bulkier and muscular looking. 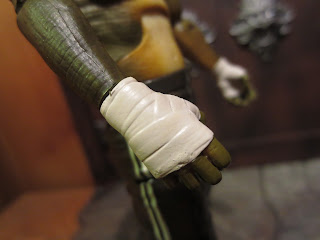 * Croc has two sets of hands: Wrapped and unwrapped. The wrapped hands are supposed to go with the jacketed look, but they came attached to the bare sleeves. Guess what? There is no way these are coming off unless I boil them or something drastic. Not sure what happened here but they're definitely not coming off without tearing unless drastic measures are taken to fix this. 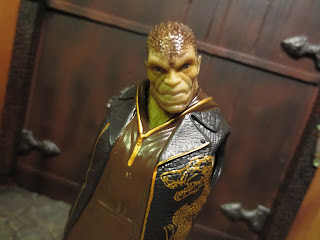 * Another disappointing element of making the "Ultimate Croc" is that the jacket piece is very difficult to get over Croc's head. This could have been handled by making Croc's head as easily removable as his arms were, but alas it is not. You're really going to have to tug and finagle the hoodie over his head to change back and forth between his two different looks. 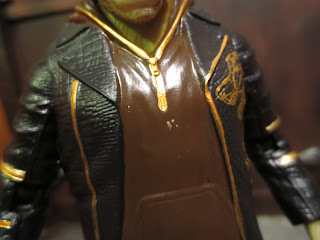 * While Croc's jacket is pretty decent, the hoodie he wears underneath it has some really soft details that just do not impress me. The zipper on this hoodie just looks like a mess and there gold paint spattered about. 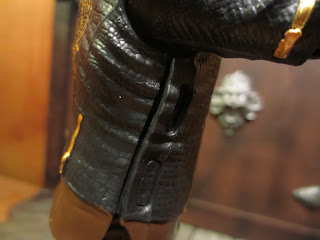 * To help you put the jacket on Croc there is a rubbery clasp on the side. I hate these things and they're almost always frustrating. This is one that I cannot even begin to get closed! 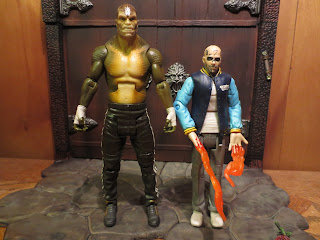 * Perusing my copy of the excellent book Suicide Squad: Behind the Scenes with the Worst Heroes Ever, it's pretty easy to tell that Croc is not that tall in the film. When standing next to El Diablo, the top of Diablo's head reaches Croc's brow. Here, though, Croc is towering over everyone else. I can appreciate Mattel making this build-a-figure taller, but it's just not accurate to this version of the character. I don't think most people will care, but I do wish he were bulkier rather than taller. 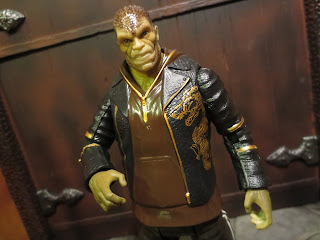 If Killer Croc were a basic figure (and, to be honest there's no reason he couldn't have been) I'd have gone a bit easier on him. As a build-a-figure who is being used to tempt folks to collect the entire series, he's just not that impressive. There have been a number of better Killer Crocs released over the years. I like the concept but Mattel's execution is really lacking here. Considering the annoying elements of the transition and the overly soft detail, the best I can do is give this guy an Eh. Unless you're planning on buying the whole series already, there's no reason to hunt this guy down.

While I own a number of Killer Croc figures, I've only reviewed two of them on here: The Arkham Origins Killer Croc and the Imaginext K. Croc & Swamp Skier.