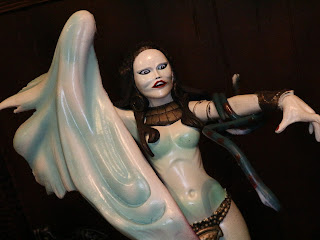 Back in 2015 during 31 Days of Toy Terror Returns I reviewed Xaltotun the Undead from McFarlane Toys' 2005 Conan: Hour of the Dragon action figure line. I don't have any more Conan toys that seem like a solid fit for the Revenge of 31 Days of Toy Terror but I did decide now would finally give me the chance to check out a figure from a series I've always wanted to look at on Action Figure Barbecue: N2 Toys' Frank Frazetta inspired Master Artist Series. As best as I can tell the line was released in 1998 by the now defunct N2, was sculpted by Eight Ball Studios, and was distributed by Diamond. Today I'm checking out Frazetta's Sea Witch, a sea siren from Frank Frazetta's 1966 painting "Sea Witch" which appeared on the cover of issue #7 of Eerie Magazine. I actually have this entire series of figures and while I believe this is the weakest statue in the set of nine it is the one most fitting for the Revenge of 31 Days of Toy Terror. Let's take to the sea after the break... 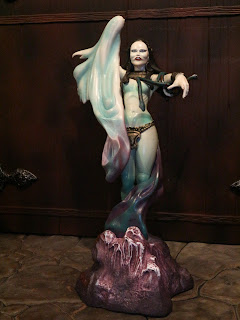 Height: 7 inches from base to head. 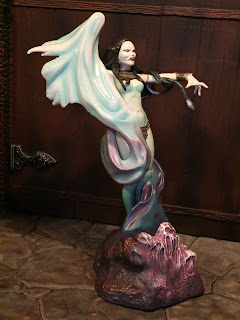 * The concept of this line was to translate the characters from the artwork of renowned fantasy artist Frank Frazetta into three-dimensional plastic statues. Factoring in that these sold for under $20 originally back in 1999 it was still a pretty decent price for a plastic ministatue though it would have been on the higher side for action figures. I do like the pose of the statue which depicts the titular Sea Witch standing upon a rocky jutting out of an ocean. While the statue itself has some problems the overall look and feel of the design is accurate to the source material and looks pretty cool. 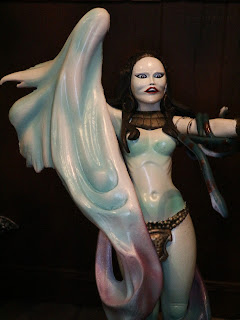 * The goal of these statues was less to be accurate with the paintwork and more to evoke the colors of Frazetta's artwork. The Sea Witch actually has a bit more of a standard paintjob than most other figures in the series and I like the mixture of darker, metallic armored bits with the witches pale and aqua highlights. The musculature of the Sea Witch and overall build definitely captures Frazetta's style quite well. It should be noted that while the original painting depicts the Sea Witch topless, N2 Toys/ Eight Ball Studios chose to have her flowing hair cover her breasts, though. 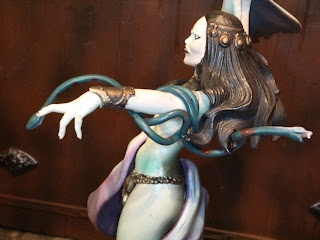 * The painting depicts the Sea Witch as having two serpents leaping forward from her left arm. The way the serpents are positioned in the original painting would be pretty difficult to capture in a plastic statue so this piece has the snakes wrapped around the witch's left arm a bit more, jutting out in different directions. It's a cool look and probable one of the highlights of the statue. 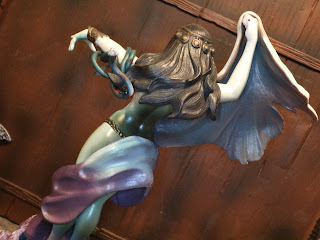 * Wrapped in some sort of billowing cloth, the Sea Witch definitely has a flowing, airy quality to her. While the robes here are molded in a softer, more pliable plastic than the statue it still seems a bit too heavy. Despite that, the garments still seem a bit windswept and the statue does have a bit of "motion" to it although it isn't quite as ethereal as I would have liked. 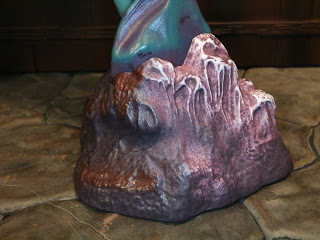 * The base does offer up a decent approximation of the rocks jutting out of the raging ocean in the statue. It features a nice paintjob evocative of the painting and keeps the figure standing upright. 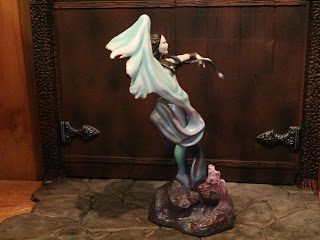 * So... one of the problems with this statue is that it seems doomed to lean backwards. There's something about the sculpt of the Sea Witch or the material she is made from that just causes her to wilt backwards. 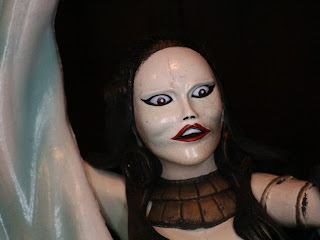 * The face on the Sea Witch is...just really bad. The Sea Witch in the paintings isn't one of the great Frazetta beauties or anything but this statue has a paintjob that just looks ridiculous. These eyes and lips are so cartoonish that it completely clashes with the rest of the statue and the rest of the line. 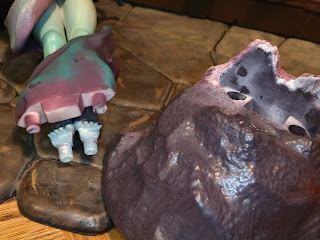 * Maybe it's the reason the statue leans backwards but the figure just fell out of its base the day I picked it up (I probably got this about 10 years ago). It doesn't appear to have been glued in nor does it seem to even fit in properly. 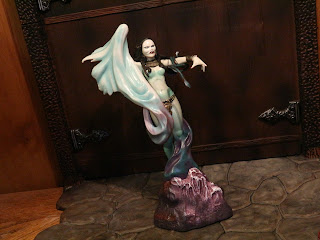 To be honest, this line was a bit on the pricier side when it was released (compared to other releases of the time) and the Sea Witch wasn't incredibly impressive back then, either. I really like the Frank Frazetta Master Artist's Series figures but the Sea Witch is a fairly Eh release. Maybe I'll review some of the better ones in the future but since she's a spooky Sea Witch, this one made the cut for the Revenge of 31 Days of Toy Terror. Maybe take some time to admire the painting instead of hunting this one down. 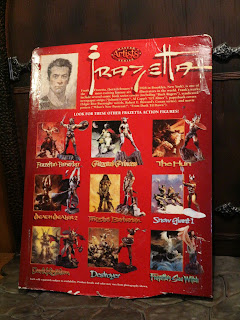 Wrapping up, I do want to say that it has been incredibly difficult to find information about the Artist's Master Series toyline from N2 Toys. It appears that the first four figures (Death Dealer 2, Frazetta's Princess, Frazetta's Berserker, and The Hun) were released in 1998 while the last five (Sea Witch, Frazetta's Barbarian, Snow Giant I, Dark Kingdom, and Destroyer) were released in early 1999. While all of the packaging mentions Eight Ball Studios, only the second series mentions N2 Toys. The first series mentions Diamond Comics and Warner Bros. Toys. Can anyone offer me some clarification on these?
Posted by Barbecue17 at 10/10/2018