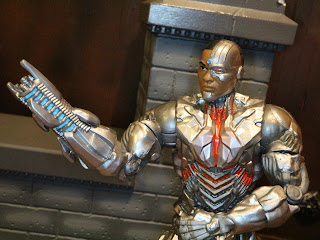 At this point it's a tie between Cyborg and Aquaman as the member of the Justice League whom we've seen the least on screen. I feel like Aquaman is getting more media exposure due to being portrayed by Jason Momoa and the significant changes to the characters appearance from the classic version everyone is familiar with, but I'm really curious to see how younger DC fans react to a live-action Cyborg. Considering the character's prominence in a popular show like Teen Titans Go, it'll be interesting to have a superhero that younger viewers may know more about than many older moviegoers. While Cyborg has been an important of the Teen Titans and the DC Universe since 1980, it's only been since the start of the New 52 that he's been promoted to the big leagues as a core member of the Justice League. While Cyborg did appear in Smallville (portrayed by the late Lee Thompson Young), actor Ray Fisher is really getting the opportunity to define the film version of the character. I'm excited to see Cyborg in action and I was excited to find this figure. While Aquaman and Flash were missing the day I found most of this series, Cyborg was still present. How does he measure up to the rest of the team? Let's find out after the break... 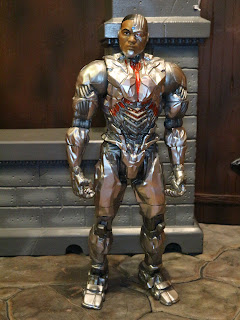 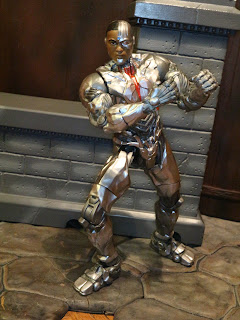 * Like most of the other Mattel DC Comics Multiverse figures, Cyborg has adequate articulation and is a sturdy, well built figure. While Mattel markets these to collectors, I really don't see any reason an appropriately aged child couldn't play with these. They're quite sturdy. Cyborg certainly is not as articulated as most other 6 inch collectors figures (he's missing a mid-torso joint and wrist joints), but he's not bad. He's honestly my favorite figure in this line thus far to just pick up and fiddle around with while watching TV or something. 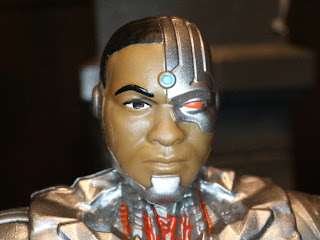 * The headsculpt isn't bad, either. It's much better than both Superman and Batman in terms of likeness; this actually looks quite a bit like Ray Fisher. The sculpt is quite good and the paintwork is near and clean. I love the design of Vic Stone's cybernetic elements on his head and I can't wait to see how they translate on screen. 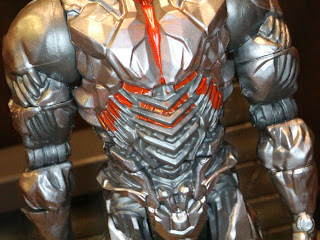 * I will give Mattel props for definitely attempting to do some detailed sculpting in translating Cyborg's unique appearance into action figure form. Overall I think Cyborg's body misses the mark, but both the front and the back of the figure do feature some impressive details that show someone tried to make this guy work. The red paint apps (red lights in the film) look pretty cool, too. 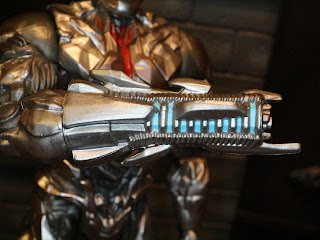 * Cyborg's right forearm detaches so you can attach his sonic cannon/ white sound blaster accessory. I like the look of this accessory. I also like the fact that Cyborg comes with a character specific accessory. Neither Batman nor Superman came with anything the figures could interact with, which seems pretty lame. While Superman would have likely needed a energy affect or something, Batman never has a shortage of toys. It's good to see Vic showing the big guns how things should be done, huh? 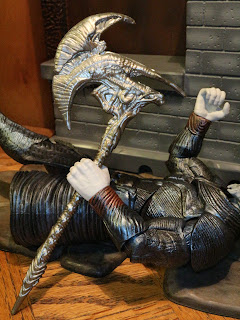 * Vic is also packaged with Steppenwolf's left arm and a giant axe. I'm still in the process of building mine, so I'll review it when mine is complete, but for now I'll just say that I always appreciate when a Collect & Connect piece is included. The axe is pretty cool and I could see fans of Masters of the Universe Classics or Mythic Legions wanting to pick up this accessory as an extra. 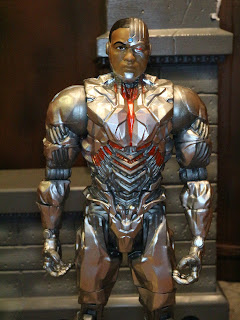 * Cyborg has a very tough look to replicate. Look at how complex his body is in this film still. He definitely has the busy, complex Transformers-like styling going on and I think most of us could guess from first seeing an image of the character's film look that Mattel couldn't deliver something that looked screen look. Unfortunately, I feel like Mattel didn't even attempt to create a cohesive, rounded out figure. Cyborg just feels very lifeless and...plain, maybe? Maybe flat is a better word. There's something about the figure that reminds me more of one of those cheap 12 inch Hasbro superhero figures rather than a 6 inch collector figure. 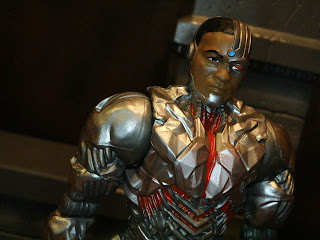 * And you know what isn't helping? Those enormous shoulders! I know Vic Stone was a star football player before he became Cyborg, but my word! His shoulders look larger than his head. Like Brennan Huff's Chewbacca mask, these shoulders are not movie quality. 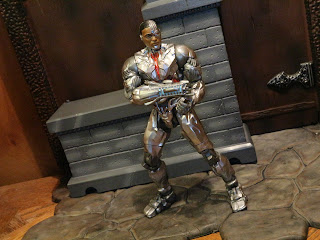 Cyborg has the misfortune of having a design that just doesn't translate well to a mass market retail figure. While a company like NECA or Mezco could probably faithfully recreate Vic's complex body as an articulated figure, Mattel just wasn't up to par. Maybe if they had used Four Horsemen studios who sculpted the beautiful DC Universe Classics line? There are some decent features to this guy, though, such as the alternate blaster arm and the headsculpt, but this guy turned out fairly average. He's a Good toy, but it's unlikely to really impress anyone as a collector's item.


This is actually only the second Cyborg figure I've reviewed on Action Figure Barbecue. The first was the Cyborg die-cast minfigure from the Pack A 5-pack of DC Nano Metalfigs from Jada Toys.