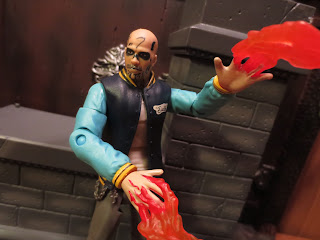 Today I'm looking at the first of two Wal-Mart exclusive Suicide Squad action figures from Mattel's DC Comics Multiverse line: Diablo. Well, it's actually El Diablo, I believe, but the package actually does just refer to the character as Diablo. Played by Jay Hernandez, El Diablo is a former criminal named Chato Santana who was given mysterious powers that manifest themselves in a vengeful pyrokinesis. Hernandez's costume looks really accurate to the comic source material and I'm pretty excited to see this guy on the screen. If you're a fan of El Diablo you can try to hunt him down at Wal-Mart currently where he seems to be kind of short-packed compared to the other exclusive figure, Rick Flagg. Wal-Mart exclusives can be notoriously difficult to find! Let's take a closer look at El Diablo after the break, shall we? 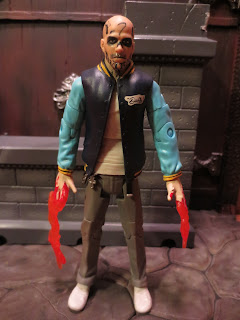 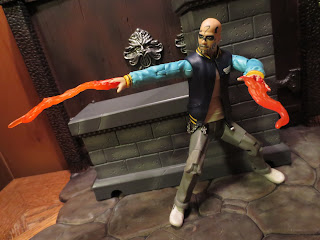 *Overall Mattel has definitely improved in their quality control and, other than his wrists (which I'll get to in a minute) this is a pretty sturdy figure. There's a good bit of reuse here from earlier Movie Masters figures (as far back as the Dark Knight series) but the mixture of new parts still gives this a nice range of motion. Not Marvel Legends or WWE Elite quality, but still pretty decent for a mass market figure. 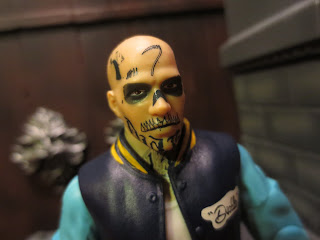 * This is actually a pretty good headsculpt. I'd go so far as to say that it's the best headculpt in the Suicide Squad line that I've seen so far. The headsculpt not only looks like Hernandez as El Diablo but the tattoos also nicely match up with the character. The detail work here is pretty slick and I really like it. * Check out this sweet logo on the back of El Diablo's jacket. I love it! The flames and the skull look cool and the print is very neat and legible. I at first wondered why it said "Thee Hillsiders" rather than "The Hillsiders" but, as I've researched it, it seems that other licensed toys and figures have this same spelling. I can't find a picture from the movie of the back so we'll have to wait and see if it's accurate. It looks cool, though, as does the "Diablo" on the front left breast of El Diablo's jacket. 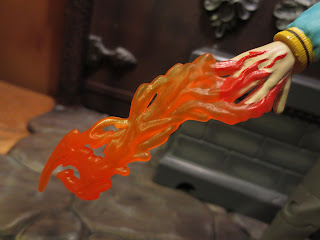 * I love the flame effects on Diablo's hands. One is a longer burst of flame while the other is a short burst or flaming effect but both look cool. I love the translucent plastic that seems to have a mixture of different shades of orange in it. It's a nice looking effect. 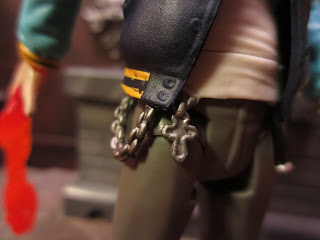 * While the arms and legs are reused from the Dark Knight Rises John Blake figure, the jacket shell and waist piece have quite a few little extra details that do add to the figure, making him rather interesting. There's a cross or rosary of sorts on his right hip and an excess length of his belt hanging out from under the left side of his jacket. The little details on the jacket piece look pretty good too, especially the buttons and the "puffiness" of the jacket. 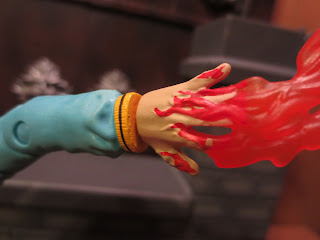 * I guess the intention here is that these swipes of red paint are supposed to represent flames covering El Diablo's hands or his hands glowing red from using his powers, but that's not what they look like. They look like his fingers are bleeding, which I'm sure isn't the look that Mattel was going for. 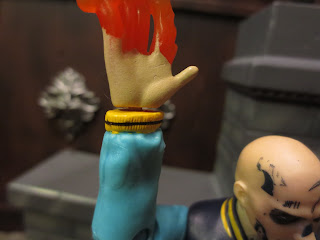 * The biggest articulation concern I have with Diablo is the wrist pegs. They just seem so thin and flimsy, particularly given that they're supposed to support the weight of the flaming hands. 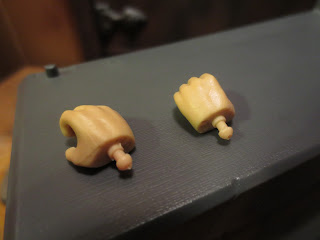 * El Diablo's only accessory is a pair of hands but guess what? Just like the wrist pegs on the flaming wrists, these pegs just seem too small and fragile. I don't have any confidence from my few efforts to change these that the pegs won't just break off. I like the idea of these but the execution is a total failure. 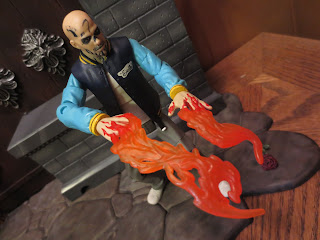 I really like this figure as the paintwork, flame effects, and headsculpt are really pretty impressive. Still, the figure takes a hit because of the fact that there is no way you're swapping those hands out unless you're using a hair dryer or the boil and pop method, which isn't something you should have to do for a mass market figure offering swappable hands as an accessory. Since I didn't have any breakage problems I'm giving El Diablo a Good rating. If you're content with what you see he's a pretty decent figure but he's definitely not as well thought out as he should have been. DC Collectibles has their own version coming out next year, so he might be worth waiting for if you're intending to only pick up one El Diablo.