The Revenge of 31 Days of Toy Terror: Gremlin from Monster in My Pocket by Matchbox 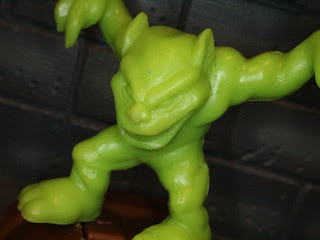 The Revenge of 31 Days of Toy Terror just wouldn't be a Halloween themed toy countdown without the presence of Matchbox's 1990 minifigure line Monster in My Pocket, would it? So, having any trouble with your computer or other internet browsing device today? Maybe it's because of a Gremlin! My guess is that when most of us think of Gremlins we either think of Gizmo and his nastier ilk from the 1984 Joe Dante film or the creature that menaced William Shatner in the Twilight Zone episode "Nightmare at 20,000 Feet" but gremlins first became popular during 1920s as an excuse for the many problems and failures that inexplicably occurred with aircraft (possibly due dealing with hallucinations at high altitudes, many pilots claimed to have seen gremlins messing around with their airplanes). Today Gremlins get blamed for lots of problems with technology in general, although it is doubtful they really hack into Twitter accounts and write offensive tweets despite claims to the contrary. Let's check out a cool, ghastly little green Gremlin after the break... 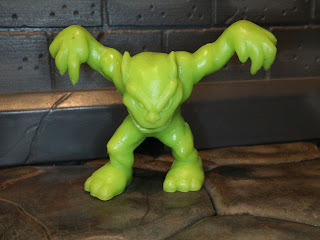 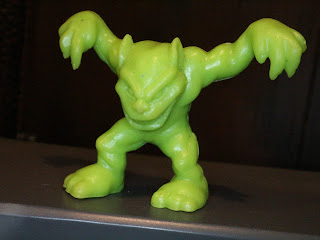 * This Gremlin is molded in green although I'm sure he appeared in the other series 1 colors, too (red, yellow, and purple). He has a pretty cool pose that looks fairly dramatic and definitely casts the Gremlin in a negative light (if you're hanging around with your arms up like that you're definitely up to no good, especially when making that weird, ghoulish grin. 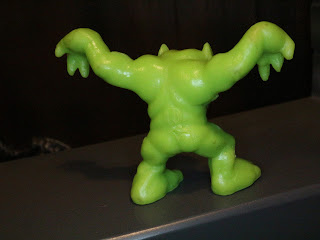 * The sculpt of the Gremlin is a bit plain. He's definitely naked but there just seems to be little to no texture here. Other than a bit of detail in his physique and the points value of "10" on his lower back, the Gremlin just seems a bit less exciting than other figures in the line. 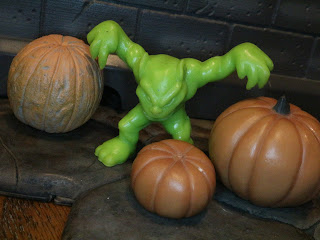 It's tough to really find too much wrong in a small minfigure but I do think the Gremlin is one of the less interesting Monster in My Pocket figures released in Series 1. The face and the sculpt look good (the face puts me in the mind of a Mordle) and I love the way his claws are spread out. I just wish the body was a bit more exciting, though. This guy is a Good Monster in My Pocket figure, but not a good one. He's also the one Monster in my Pocket figure you don't want the TSA to catch you with in your pocket at a security checkpoint.


If you're a big fan of gremlins, I've also reviewed the Gremlin from Bif Bang Pow's The Twilight Zone toyline.

For more Monster in My Pocket toy reviews, check out the following:
Astaroth
Creature from the Closet
Drude
Dybbuk
Ghost
Karnak
Mad Gasser of Mattoon
Mad Scientist
Skeleton
Witch
Posted by Barbecue17 at 10/14/2018