Action Figure Review: Karg from Masters of the Universe Classics by Super7 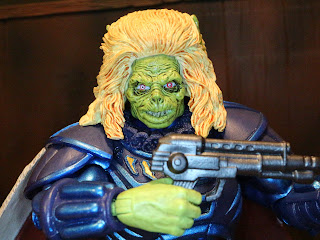 It has been nearly two years since my last Masters of the Universe Classics review. Two years. What happened? At times in the past I have declared Masters of the Universe Classics my favorite toyline of all time and, all things considered, that's probably still true (it could be tied with Star Wars: Micro Machines by Galoob). Unfortunately, Mattel went out with more of a whimper than a bang in 2016 as they had some serious snafus that and began to focus more heavily on Filmation variants of popular characters.  I certainly love the Filmation cartoons of He-Man and She-Ra but the figures didn't appeal to me all that much with their simpler style. Initially I was skeptical of Super7's and the higher cost of the figures as well. I sort of sat back for awhile to see what would happen and guess what? Super7 really seems to be getting their act together. I was waiting for a sign to hop back in and, for me, that signal was Karg. I love the Masters of the Universe movie. Love it. Love. It. Yes, bringing the battle to Earth was a horrible idea that was used to lower the budget but there is so much right about that movie. One of the things I love are the new Evil Warriors introduced in the film. Blade and Saurod both received action figures in the vintage Masters of the Universe Toyline and in MOTUC but Karg was left high and dry. Various licensing issues kept Karg from being made for so long but various things have popped up or changed which made the figure seem possible over the years and have kept fans championing for him! Technically, this version of Karg is based on a 1987 comic appearance rather than the film. You know what? I'll take him. Despite whatever comes of Super7's tenure with the Masters of the Universe license, they have given us Karg and we ought to sing songs of their heroism and mighty deeds. Let's check Karg out after the break... 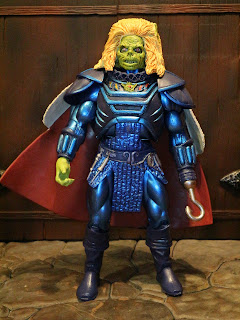 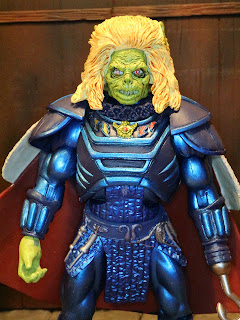 
* Karg looks great. While he's not quite the movie version of Karg in the same way that Saurod and Blade were film authentic, Karg does a great job of looking like the film character with the color palette from the comics version. The figure has lots of unique sculpting and permanently affixed body armor that gives him a very unique and hefty appearance. It really works for him, particularly the great metallic blue color scheme. I love metallic blue, if you really want to know. And Karg in metallic blue is phenomenal. 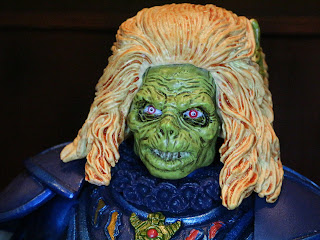 * The headsculpt is great! The green, wrinkled face is one of the most terrifying action figure visages I've ever seen! It kind of reminds me of one of the Moria goblins from The Lord of the Rings films although it still definitely looks like Karg. It's very ghoulish and unsettling which makes the character even more disturbing, 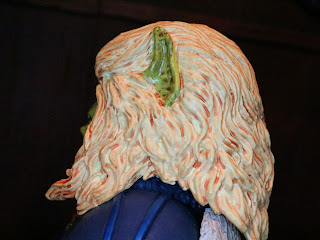 * Karg not only has a massive mane of hair (it was the 1980s, after all) but his ears are visible sticking out from underneath the hair. That's a cool detail that I'm not sure I ever noticed in the film. 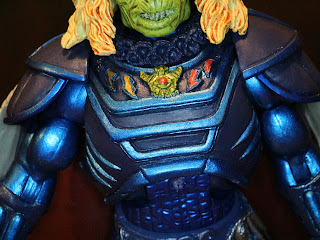 * Karg's armor is very detailed. Again, it isn't removable like most of the earlier MOTUC armor, but it does have some great paintwork, particularly the little ruffled collar and the medallion hanging down. This all makes Karg look very regal and put together, standing in stark contrast to most of Skeletor's minions who don't even wear pants. 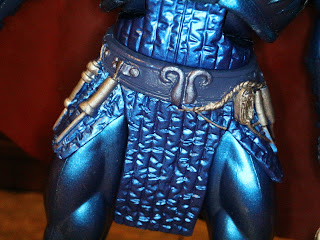 * Karg's belt and the lower part of his tunic is cast in a soft, flexible plastic that shouldn't impede the character's movement at all. I also dig all of the weird little implements Karg carries around with him. The designer of the character, Bill Stout, referenced them in an interview as "strange dental tools to do his dirty work." Karg's a dark guy. 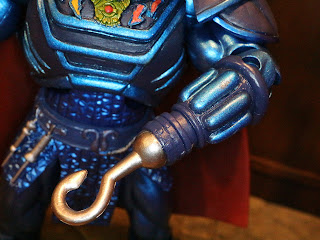 * Interestingly, Karg has a hook for a hand. Who else do you know who has a hook for a hand? No, from Masters of the Universe! That's right, Trap Jaw! While the film has Beast Man and Evil Lyn in it, it's interesting that none of the other recognizable minions of Skeletor were included. It has long been rumored that Blade may be a heavy redesign of Tri-Klops but have you ever considered that Karg could have possibly started out as an attempt at a redesign for Trap Jaw? It's kind of far fetched, maybe, but who knows? 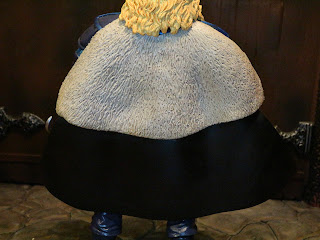 * Again, focusing on Karg's more regal and military minded appearance, Karg's sporting a heavy layered cape. It's fairly soft and pliable with a great texture on the "fur" coating. Again, Karg looks like someone in charge while Beast Man can't even be bothered to wear shoes! 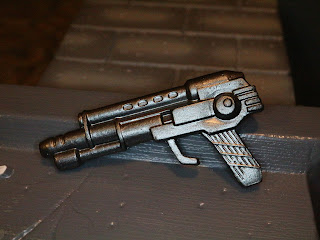 * Karg carries one of the pistols from the film. It's a slid looking sci-fi styled blaster and I love the design. It looks very solid and very hefty. Karg carries a well designed and reliable pistol while Trap Jaw uses an arm mounted fly swatter. The Evil Warriors. Bless their hearts. 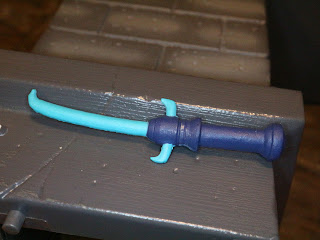 * Karg also comes with a wicked looking hooked dagger. It fits in his right hand or you can actually wield it in his hooked hand. Would that work? Who cares, right? Karg has a pistol in one hand and a dagger in the other hand, which is really a bladed hook hand! Dang, Karg is a smooth operator! 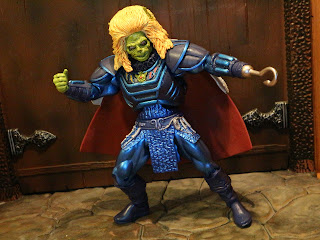 * Overall, the quality of this figure, part of the second series of the MOTUC/ Collector's Choice line, feels no different than any Mattel figure. Super7 does a lot of stuff like ReAction styled figures and M.U.S.C.L.E. but MOTUC was probably their most ambitious project to date. It seems like they'e getting the hang of it in the second series as Karg is sturdy, well articulated, and quite fun. 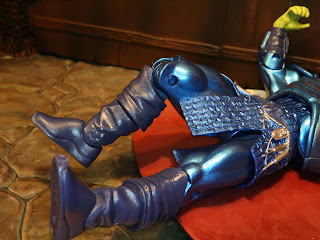 * My only complaint with Karg is that his hips are a bit loose. Karg can be tougher to display in some poses as his upper torso, chest armor, and massive mane of hair make him fairly heavy which sometimes causes his hips to buckle. Hopefully Super7 is continually evaluating and improving the articulation points, although it's possible mine is just a one-off QC issue. 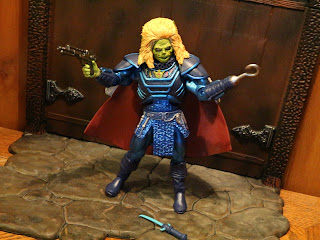 While Super7's MOTUC offerings are pricier than Mattel's were, they definitely seem to be giving the line their maximum effort. After having Karg and one other figure in hand (who could it be?) I decided the time was right for me to jump back in and support this line. Karg is an Epic figure and for those of us who have been waiting for him for years (seriously, I had all of the MOTU movie figures as a kid but no Karg, of course!) he is really something special. I don't know how Super7 was able to make him, but I'm glad they did.

This is the first non custom action figure of Karg ever made, so I haven't reviewed any others. It's also the first Super7 MOTUC figure I've reviewed. Don't worry! More are coming!