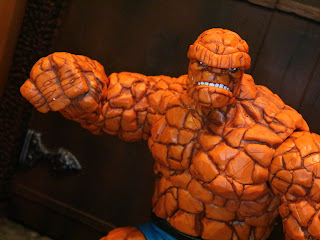 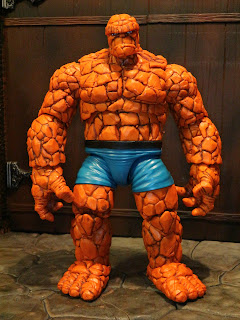 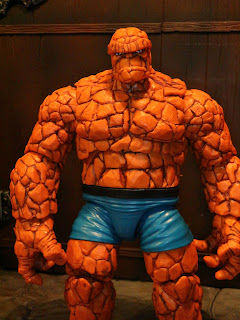 * Man, the Thing looks great, doesn't he? He's just so classic and definitive looking. Honestly, if you asked me at any point to imagine the Thing (other than while watching John Carpenter's The Thing), this is exactly what I'd come up with. He's orange, has some amazing;y detailed rock like skin, and just oozes a funky, fun comic book feel. He's also wearing the blue trunks, which is really the default look for the character, wouldn't you agree? When both the Thing and Dr. Tobias Funke can pull off a look, it's a guaranteed classic. 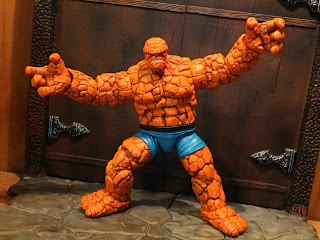 * The Thing is pretty large. He is a very, very heavy figure and there's just something about him that rocks. Sheesh, I didn't even intend for that pun. Seriously, though, he feels like he easily could have been a build-a-figure. He's not that much taller than everyone else, but he's just so dense. The sheer heft of the guy is impressive! 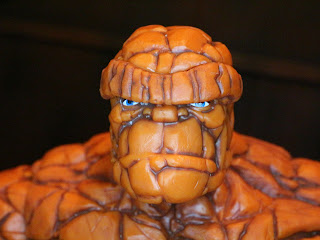 * I love the default headsculpt as it does a great job of capturing the Thing. It's a great blend of the various versions of the character that manages to still remain some of the Kirby character while looking like a thoroughly modern and recognizable rendition of Ben Grimm. 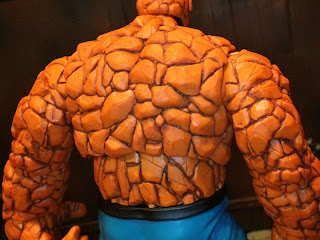 * The texture work and paint work/ paint wash on the Thing's skin is excellent. It looks s well thought out and rendered that I really have a hard time imagining any company doing a better job of capturing the character's look and physique. 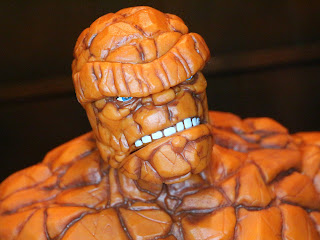 * The Thing comes with an alternate portrait to his angry looking mug that shows him... well, even more angry, really. I love this one! That angry grimace is exactly what some fool is going to see shortly after hearing "It's clobberin' time!" 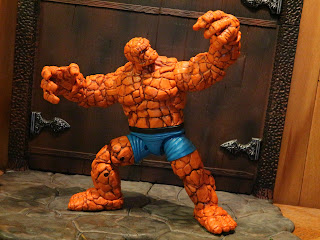 * The articulation is excellent, particularly for a larger and bulkier character. Yeah, the elbows aren't double jointed like most Marvel Legends releases but they work very well. This guy us tons of fun to play around with and pose in various "smashing" poses. 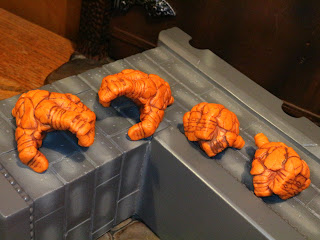 * To help give you some better poses, the Thing includes two sets of hands: A set of wide grip hands and a set of fists. The fists are for straight up punching but the grip hands are useful for lots of stuff: They're expressive while also allowing the Thing to pick up smaller villains in order to give them a good Clobberin'. The hands swap easily and are super thick. 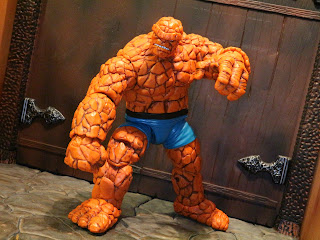 Wow. Hasbro did a great job with this release and it is absolutely an Epic figure. Remember that even though one of my primary collecting passions is DC action figures (specific Gotham/ Batman related stuff), I will absolutely say that Hasbro is kicking the snot out of everyone else producing superhero action figures today. Their quality is excellent, their selection is amazing, and man do they ever give us some cool extras. It is really fun to have the Fantastic Four assembled! 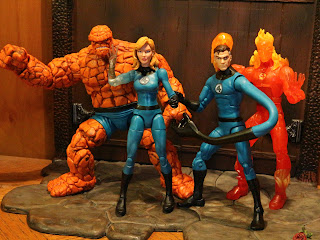 Here's a shot of all four members of the Fantastic Four! Remember that these are all Walgreens exclusives so keep checking your local stores. Hopefully you'll have good luck with these!

This is the first action figure of the Thing I've reviewed on the site. For more Marvel Legends Series figures, check out the following: