The Revenge of 31 Days of Toy Terror: Mummy Army by Dollar General 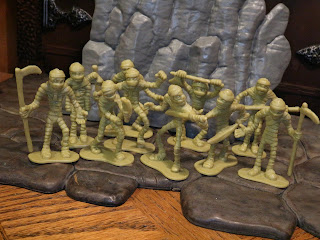 Every year there is some random, inexpensive Halloween themed toy that just seems like a must have for the Halloween season. In 2018, that toy might be the Mummy Army set of minifigures sold by Dollar General. These are very similar in scale and style to your traditional plastic army men and come ten to a pack for only $1. One thing that I find really nice about this set is that you get the same ten unique figures in every set. That's pretty impressive, don't you think? Since Dollar Generals are located nearly everywhere you should have a pretty good chance of finding these. Thanks to my parents for finding them, as I know that hunting down plastic skeletons for their 35 year old son is how they enjoy spending their retirement. Anyways, to make this review even crazier and more off the rails than it already is, I'm going to bring back a way that I've reviewed random sets of minifigures in the past: By pretending that each unique sculpt is an enemy in some obscure and hypothetical classic Nintendo game and giving them a bizarre name and description! (I've done this before with Skeleton War, Monsters, and Zombies at War!) Pretend it's 1990 and you're riding home from your local Toys 'R Us in the backseat of your parents' car with a brand new copy of Mummy Army, an action adventure side-scroller similar to Castlevania III. Overcome with excitement, you scroll through the manual. In the game it is 1922 and the discovery of the tomb of King Tutankhamen has unleashed the curse of King Tutankhamen, awaken an army of mummies. As either archaeologist Kensington Carter or adventurer Evie Herbert, you must reclaim the 9 chapters of the Mysterious Book of the Underworld to break the curse! Let's take a peak at Mummy Army after the break... 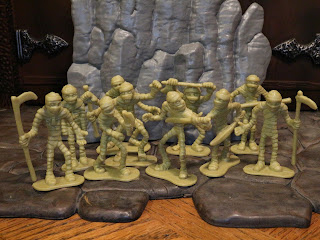 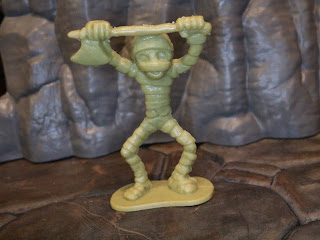 Goo Drops hang from the ceiling in ancient tombs and crypts, waiting to drop down on unprepared adventures and deliver a mighty blow with their ax! Don't get caught. Dodge them and the fall will finish what thousands of years of decay has already started. 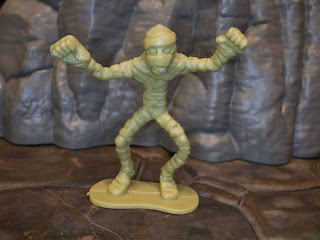 Wrappers wait in hiding behind holes in the walls of ancient tombs or open windows in nearby Cairo, prepared to pop out and deliver a final bear hug to their prey. Either avoid them or destroy them as they peak out looking for their pray. Look for their telltale glowing eyes in any opening you might pass! 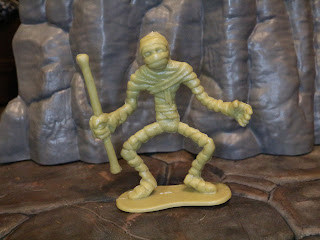 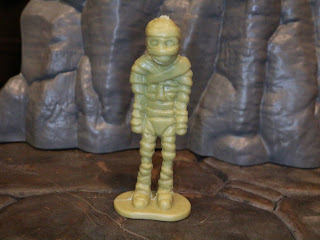 These mummies were dull in life and in death they're not much more exciting: They simply shamble back and forth, causing trouble if they run into you. Simply avoid them or take them out! 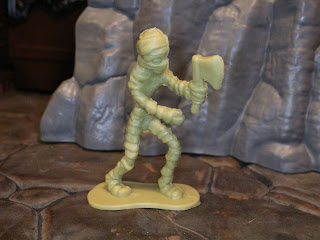 Upset that their organs were taken as a result of their mummification, Morgans are looking to replace them. While they stand in one place they launch their ancient ax in a vicious arc in order to cut loose a few pieces you're not needing. Deny them that opportunity by getting close and finishing them off! 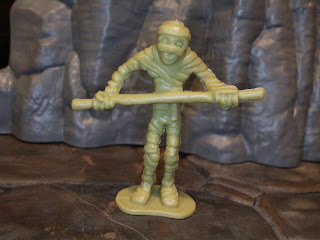 Armed with a bo staff, Disem-bo likes to attack from above or below. His long staff allows him to attack you whether you are above or below him. Be careful as they can be tricky! 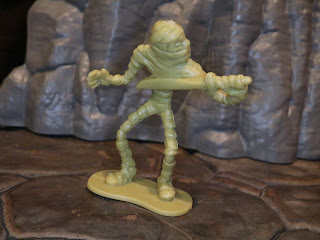 Cleave-O-Patras like to keep their distance, but that's not really much help as they tend to hurl deadly blades at adventurers in their tombs. You'd better duck or jump unless you want join them! 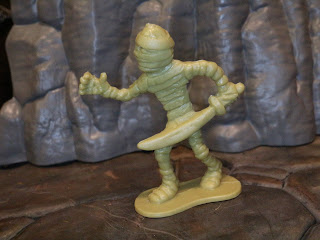 The Mummy Army is as numerous as the grains of sand in the desert and Natrons are a large part of that army. Running across the screen directly at their enemies, Natrons rely on speed and the strength of their numbers rather than any clever strategy. Keep moving! 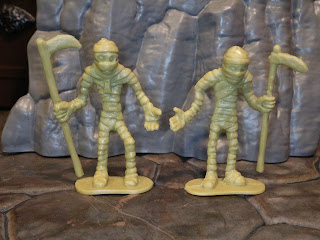 Sneak Peak at the Boss of Level 1- Aswan and Luxor

Aswan and Luxor are inseparable and work together to defeat your adventurer. Learn their patterns and dodge their scythes and you just might obtain the first piece of the Mysterious Book of the Underworld! Only eight more to go... 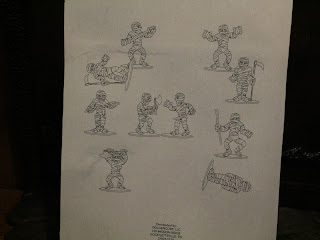 The front of the package is pretty dully (it's a purple blister card) but the back has this crazy 1980s-ish line art of the figures. Pretty accurate, right? I like how some of them are clearly knocked down in defeat. 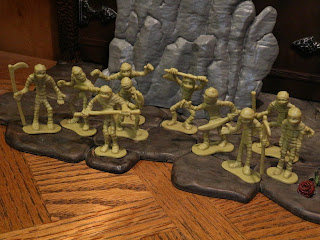 Mummy Army is one of the great surprises of Halloween 2018 and if you dig mummies, minifigures, or just cheap toys you'll want to track it down. The mummies are very cool and the poses are nice. There are 10 different figures although there isn't a lot of variation since each figure looks like, you know, a mummy. Still, it's nice to see something out there other than zombies and skeletons, right? This is a Great set and the fact that you're only paying 10 cents each for these mummies makes them a potential trick 'r treat offering for the kids. If I know your house is giving out minifigures, I'm going to show up, change costumes, and then come back again.

Do you like kind of generic and strange minifigure sets? I've reviewed quite a few of these, including:
Defender Military Set by Boley
Monsters by Hing Fat
Skeleton Toy Figures by Ningbo/ Walgreens
Skeleton War by Hunson
Super Hero by Toysmith
Zombie Playset by Boley
Zombies at War by Brilliant Novelty Co./ Spherewerx
Posted by Barbecue17 at 10/27/2018