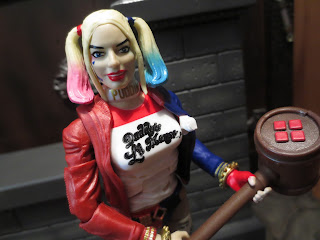 Today I'll be taking a look at the Toys Us exclusive Harley Quinn from the Suicide Squad subset of Mattel's DC Comics Multiverse toyline. This jacket wearing version of Dr. Harleen Quinzel is only the second Suicide Squad figure I've reviewed since seeing the film so you might be expecting me to offer my thoughts on the film, no? For some in-depth thoughts, check out the podcast where me, my wife, and the Reel Brad Bell discussed this film (and a few other things) for over two hours! I will say that love them or hate them, the DC films feel like they offer more to talk about than the Marvel films (which my reviews of were usually just me saying what I liked about the movies). Of course since this review is about Harley Quinn, arguably the star of the film, I'll just say that Margot Robbie was incredible in bringing this character to life. Ms. Robbie no doubt can carry an entire film on her own as Harley Quinn and I'm excited to see her take this character and make it her own (as she seems to have plans to do so). It's unusual to say that about a villain (though Harley feels like she's already heading towards being an anti-hero in the film) but I think it's true here. For me, it's been a pretty cool year to be a Batman fan (I'm a much bigger "Batman" fan than I am a DC fan, to be honest): While you can debate the quality of the films overall, we've had some pretty strong cinematic performances bringing various Gothamites to life and I've enjoyed it. Anyways, you're here to read about an action figure and I'm here to talk about one. Ready to get started? Let's look a bit more closely at the figure after the break... 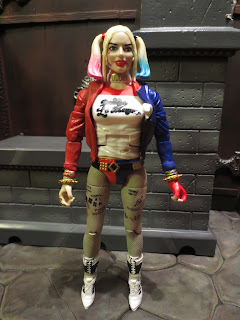 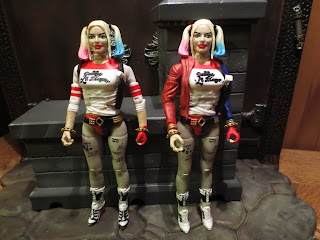 When it comes down to it, this Toys R Us exclusive jacketed version of Harley Quinn is extremely similar to the basic figure hitting every retailer carrying these figures. As I tend to do in situations like this, I will be reviewing just the elements of this figure that differ from the regular release. You can read my review of the regular 6-inch Harley right here! 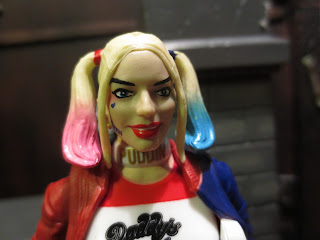 * I've seen a lot of people bash the likeness on the standard figure but I kind of liked it. It's not an exceptional Margot Robbie likeness or anything but it's clearly recognizable as Harley Quinn from Suicide Squad. Think of it as the likeness of a really good cosplayer or something. For some reason (it might be the paint) I actually think this one is even better. It looks like the exact same sculpt but there's still something about it I like a bit more. 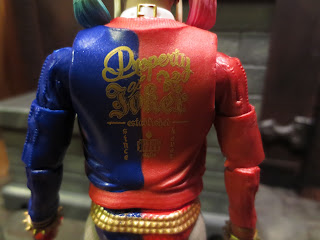 * Turn Harley around and you can see that the printing on the back of her jacket is extremely neat and legible. The paint work is quite nice overall on the figure, too. 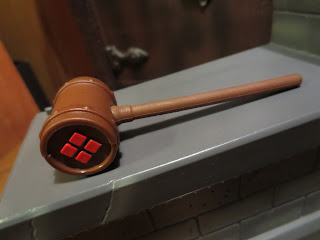 * While the basic figure comes with a baseball bat (the melee weapon Harley uses the most in the film) this version comes with her trusty mallet. It's not an incredibly impressive mallet or anything bit it is sturdy, well made, and has a cool diamond pattern on the striking face. 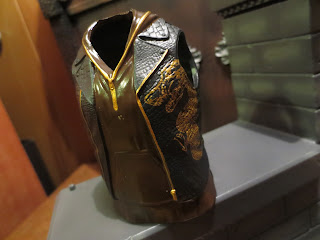 * Harley includes a Collect & Connect piece for Killer Croc (or just Croc as the packaging calls him), something I always consider a plus. She actually comes with Croc's hoodie, which is part of an alternate build for the character that can be achieved by also purchasing both Toys R Us exclusives and the Amazon exclusive Harley. I'm planning on building the figure and I'll review him as soon as I have all of the pieces. 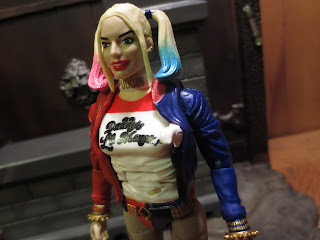 * Overall, the jacket doesn't look too bad. It's a pretty nice variant although I'm surprised that this wasn't the main release considering I'm pretty sure Harley wears the jacket more than she doesn't in the film. It has a pretty good look to it. Initially I thought it threw off the proportions of the figure but, after having it for a week or so, I think it looks just fine. 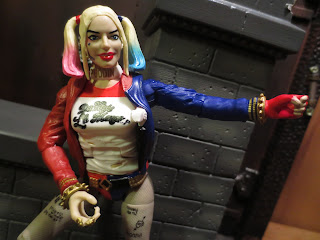 * The standard Harley figure didn't have the greatest articulation in the world but now, with a somewhat cumbersome jacket, the articulation is even a bit more disappointing. You can can some pretty bland poses out of Harley but she's not of Marvel Legends quality. Heck, she's not even of DC Universe Classics quality. 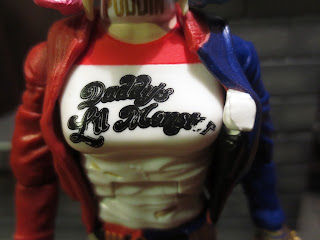 * Check out the end of the "Daddy's Lil Monster" print on Harley's shirt: It's kind of scuffed of. I wonder what happened here? Seems like just a minor QC issue but, considering that Mattel does some really clean printing on other 6 inch figures in this same scale and price range with their WWE lines, it is a bit disappointing. 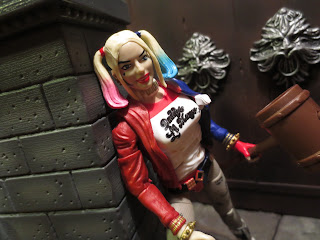 While it seems like we're soon going to be graced with a number of far more impressive Suicide Squad Harley Quinn figures from companies like Bandai, Medicom, DC Collectibles, and Hot Toys, that doesn't mean that Mattel's efforts aren't worth looking into. For $20 bucks, you're getting a pretty decent Harley Quinn figure that should fit in rather well with Mattel's long history of releases. She's not the most well articulated figure but she's still kind of fun, particularly if you plan on building Croc. She's a Great Harley figure at a pretty average retail price; that's tough to beat, even with a giant mallet.