The Revenge of 31 Days of Toy Terror: Biohazard Skeleton from Imaginext Collectible Figures Series 11 by Fisher-Price 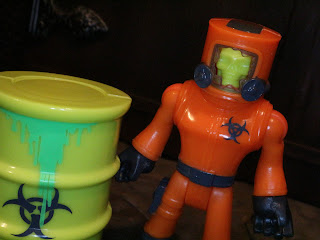 Guess what I get to do today? Finish reviewing the 11th series of Imaginext Collectible Figures! I picked all of series 11 up at the end of August and reviewed the first five in September but I decided to save this more frightening one for the festivities of The Revenge of 31 Days of Toy Terror. I've reviewed many Imaginext figures as part of the 31 Days of Toy Terror over the past six years and I love that Fisher-Price keeps cranking these crazy little guys out. One of my favorites from this new series is the Biohazard Skeleton, a nuclear yellow skeleton clad in a orange bio-hazard suit. As a kid I was terrified of toxic waste for some reason (I think I saw some TV show or news special about someone dying of toxic waste exposure, or maybe it was The Toxic Crusader televised on TV) and for a few months as a kindergartner I was terrified of strong smells or of going near sewer grates. Pretty crazy, right? Ahh, good times! Let's check out this crazy glowing skeleton after the break... 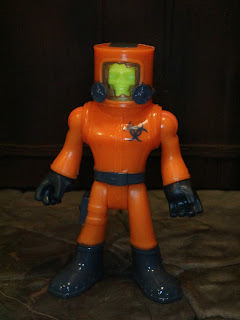 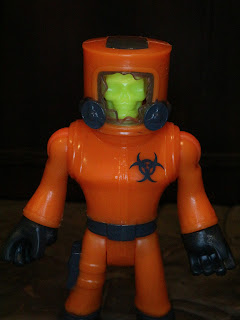 
* Fisher-Price comes up with some pretty crazy designs considering this is supposed to be a "kids line" and then Biohazard Skeleton is one of the best. I love the orange hazmat suit with a biohazard symbol. The helmet has a cool shape too, much more like the classic suit you'd see in a nuclear power plant rather than a standard hazmat suit. Something about it kind of reminds me of the Vashta Nerada from Doctor Who. 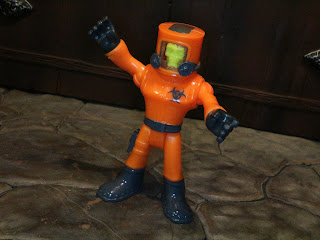 * Other than a missing neck joint (due to the design of the helmet), the Biohazard Skeleton has the same articulation scheme as most other Imaginext figures. These are fun, durable action figures that surprisingly feature as much or more articulation than the current standard 1/18th scaled Star Wars line. Wrap your mind around that for a second. 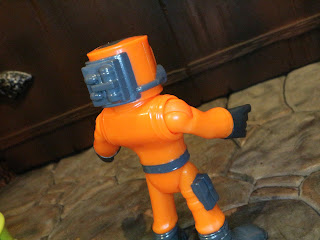 * The Biohazard Skeleton's suit features some sort of air device on the back of the head and some hip pouches on the right hip. Who doesn't dig cool little details like this? Minimalists, that's who. 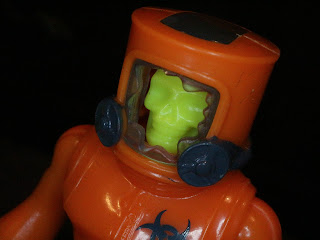 * Here's a closer look at the main draw here. Yellow skeleton! I love the broken window on the helmet and the way the skeleton is just peering through. It looks like an incredible decoration you would see at a blacklight golf course or on a POG. This is just sheer excellence. The only thing that could make it better is if it glowed in the dark. 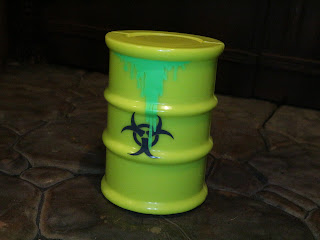 * While Fisher-Price has been cutting back on the accessories these guys include they did give the Biohazard Skeleton a pretty cool accessory: A giant barrel of toxic waste. I love the green waste dripping down the side (surely an OSHA violation though probably not an EPA violation under the current administration) and the prominent biohazard logo. Legit. The Biohazard Skeleton is a Great and a 1/2 minifigure and is possibly the best figure in Series 11. I don't know: The M.U.S.C.L.E. guys are pretty tough to beat. Still, this guy is creepy, cool, and pretty unique. Lego released their own Hazmat Guy back in the 4th series of their blind-bagged minifigures but this guy is better due to also being a nuclear yellow sentient skeleton. Some things are just irresistible.


If you dig this guy, you might dig these Call of Duty Hazmat Zombies.