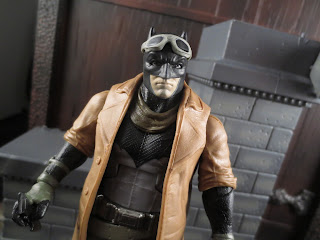 Until the release R-Rated director's cut of Batman v. Superman: Dawn of Justice, I figured I had said everything I needed to say about the film in the 3 1/2 hour episode of the Confirmed Epic Podcast where we reviewed it. Picking up this figure, however has definitely stirred up a few lingering thoughts about the film and I have to say that I'm anxious to see what a second viewing of the film brings to my mind. Released as the 6th figure in Mattel's DC Comics Multiverse: Batman v. Superman line, Knightmare Batman depicts Batman in the post-apocalyptic garb he wears while wondering through a mysterious future ruled by Darkseid. Here's the thing about this figure: First, he looks really, really cool. Two, it represents a rather different take on Batman. Whether you love the film, hate the film, or fall somewhere in between (like me), I think you have to admit that Zack Snyder did something different with these characters, particularly Batman. While you can see many of his influences (particularly Frank Miller's The Dark Knight Returns) he managed to do some things that no on would expect. I also think that these things are extremely intentional and not a result of Snyder just not understanding the characters; I think Snyder really wanted to try something new. If you really think of Snyder's BvS:DOJ as an Elseworld's concept, it works much better. Anyways, all of my thoughts here are just my way of getting into the meat and potatoes of this endeavor which is a review of Knightmare Batman. Ready for a closer look? Then join me after the break... 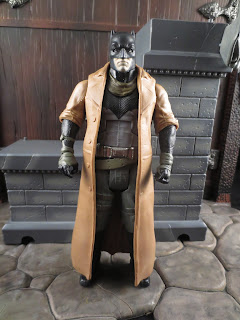 Accessories: Goggles, 3 batarangs, and a piece for the Grapnel Blaster build an accessory. 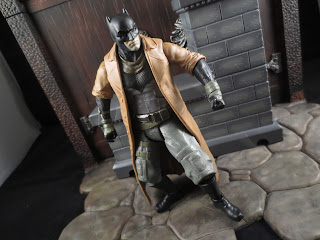 * Knightmare Batman's articulation is pretty much on par with most of the other figures in this line. It's not incredible, but it's solid and certainly above average. This guy definitely feels like a durable toy and he's really fun to mess around with. Part of that is the quality of the toy while the other part is just that he looks so cool. Coolness really counts when you're looking at something like this, y'know? 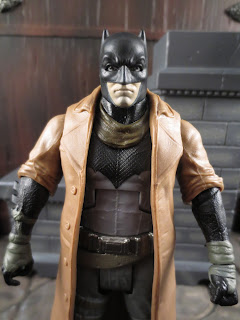 * The biggest positive about this figure for me is the outfit. From the first time I saw this outfit in some early press image I've been really, really excited for it. Considering that this is a mass market toyline and a movie tie-in line to boot, I think Mattel did an outstanding job of capturing this outfit that Batman wears during his vision of a future ruled by Darkseid and the armies of Apokolips. The coat is made from a softer material with a bit of give while the gauntlets, shirt, and pants all have different textures and feels to them. I love this drifter, post-apocalyptic Batman and could easily see this as something from an Elseworlds title or a Frank Miller storyline. Again, while Snyder's take on Batman certainly deviates from the character we know in many ways it certainly is interesting to get a different take on the character. 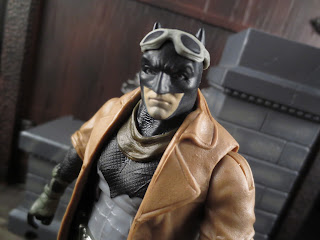 * Let me focus a little bit more on the headsculpt here as I think it's far better than the basic Batman from this line, the Armored Batman, and certainly the Unmasked Batman. It's very stern, nicely proportioned, and just looks incredible. A pair of goggles is included as well which looks great  positioned over Bruce's forehead. 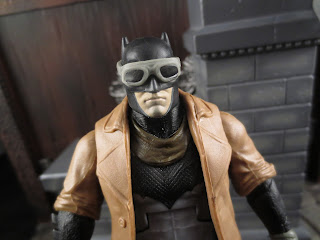 * The goggles look pretty good positioned over Batman's eyes, too. They might be just the slightest bit bulky but they certainly don't look bad at all. Seriously, I just love this costume so flipping much! I really hope it appears again in a future DC film as it's just refreshingly different. I know Batman has wore some similar things before in a few Elseworlds titles, but here it's rendered in such a different way. I really love this! It's so great to get a Batman figure that stands out from the rest. 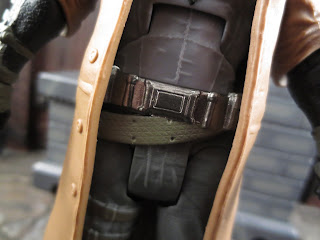 * Here's a quick detail shot of the utility belt and the pistol belt. There are quite a few different textures on this figure and Mattel did an excellent job with them. While this line perhaps could use some better headsculpt, the work on the bodies and outfits has been excellent so far as I have seen. I'm still looking for Lex Luthor, Wonder Woman, and the Bat Demon, so we'll see how those hold up compared to the figures I've already reviewed. 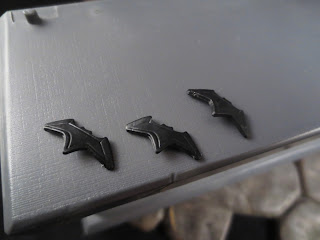 * I've found myself mentioning a few times lately how cool it is to be getting Batman figures which include batarangs. For years it has seemed like a batarang was such a rare inclusion but Knightmare Batman includes three. They're a bit rubbery and they have a small china stamp on them but they are cool. You can even fit all three into Bruce's right hand which looks pretty slick. 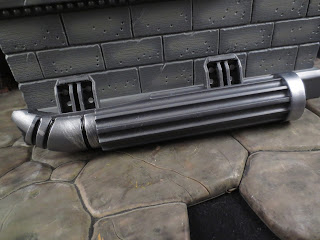 *  If you purchase all eight basic figures in the series you'll end up with the pieces to build Batman's Grapnel Blaster from the film. This is only my fourth basic figure in this series so I'm only about halfway there (Batman Unmasked comes with an exclusive alternate piece). This is the bottom of the Grapnel Blaster's main body and might be the tube holding whatever propels the darts. The paintwork is nice here with a few good effects and it feels sturdy. I'm getting rather excited about this project but I'm hoping Lex Luthor and the Bat Demon don't become a phantom wave or anything. 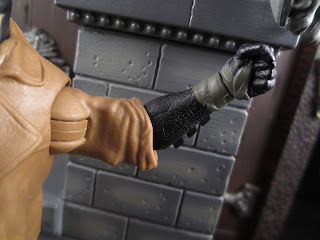 * Knightmare Batman is built the same as the other figures in the line for the most part so the only real surprise so far as articulation goes is that his elbows have a severely limited range of movement. The rolled up coat sleeves really hinder the swivel/hinge elbows. 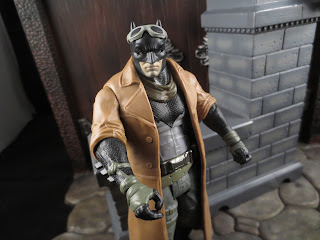 * Again, one of the more unique things about Snyder's take on Batman is that Bruce has clearly thrown away a number of his "rules." He seems to have no problem with killing, he uses alcohol, and he uses firearms to some extent. Again, I don't love the idea that Bruce has changed some of moral stances but I do find it interesting to watch a version of Batman that has clearly reached a very dark point in his life. That being said, it was really jarring to see Batman use a gun during this vision sequence and I really think Mattel should have included as it's part of the apocalyptic nature of the scene. Failing to include one is a big miss in my book. 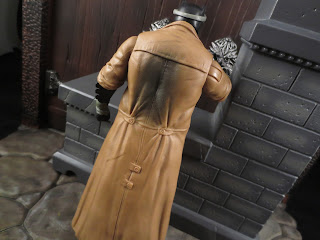 * This dark spot on the back of the trenchcoat doesn't look terrible, but it would have been nice if Mattel has spread the spray effect out a bit. A nice dry brushing or something would have gone a long ways to making this coat look even more weathered and movie accurate. 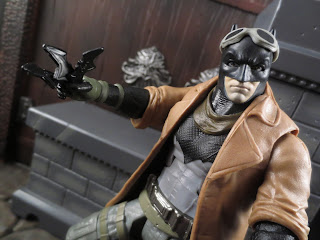 This felt like one of the longest reviews I've written in quite some time! I really had a great deal to say about this figure, though, even though there are some flaws. To me the biggest flaw is the limited arm motion, although I'm probably going to be a bit more forgiving on that than other will. I love this costume and I'm pretty impressed with how everything turned out. I remember seeing the basic series Knightmare Batman a few months ago and it took all of my willpower to hold off and wait for this one to come out. I'm glad I did, though, as this is a Great and a 1/2 figure. I have a feeling this is going to be a popular costume for Batman in the future regardless of their thoughts on the film, and it seems like toy makers agree. Funko has a Knightmare Batman POP! available now while both Medicom and Hot Toys are working on higher end versions of this costume. It really is a great look and if you don't appreciate anything else about Batman v. Superman, you can at least appreciate this.

Young Justice: Invasion by Mattel
Batman
Posted by Barbecue17 at 5/10/2016