The Revenge of 31 Days of Toy Terror: Alchemist #9096 from Special Plus by Playmobil 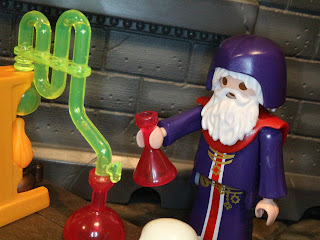 Today for The Revenge of 31 Days of Toy Terror I'm checking out something that may not be incredibly spooky but that should still get you in the Halloween spirit! It's the Playmobil Alchemist with Potions from the Special Plus series, which typically are smaller sets with one figure and quite a few extras. I will disclose that I'm not a hardcore Playmobil collector but I do go through spells every few years where I pick up some. I first learned about this set during a visit to the very cool Dancing Bear Toys in Hendersonville, NC. This August Playmobil released quite a few "spooky" sets that definitely called out to me and felt like they deserved a home in my horror collection and a review slot in 31 Days of Toy Terror. I grew up playing with Playmobil and I wish I'd kept most of mine, particularly the mid-late 90s Magic sets. One of my favorite sets as a kid was Wizards Workshop #3839. I loved the accessories included with the wizard and I'm glad Playmobil continues to recirculate their pieces over and over because I've been able to get my hands on these very cool chemistry pieces. This set, released last year, had many pieces I was looking for. Ready for a walk through a creepy old laboratory complete with rats, skulls, and good old fashioned pseudoscience? Then join me after the break... 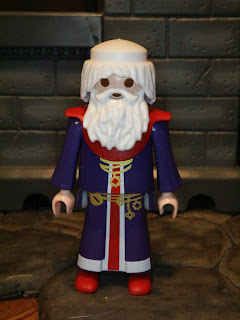 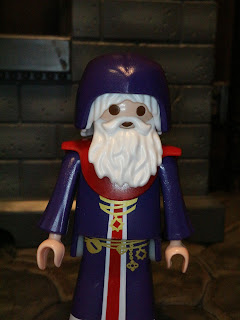 * First up let's check out the Alchemist. He's wearing some pretty out their garb, letting us know immediately that he's pretty eccentric. He kind of looks like a high class Harry Potter extra. He's wearing a head covering of some sort that definitely makes him look like a scholar or a magician as well as a red mantle on his shoulders. I love the purple and red color scheme! It is very distinguished! He also has lots of odd little trinkets and doodads on his belt. I wonder what they are all for? 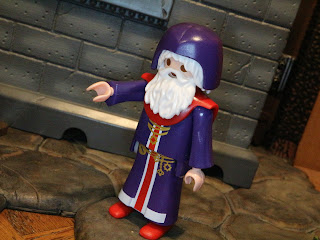 * Like Lego, Playmobil pretty much keeps their basic "Klicky" the same. Even wearing a robe, the Alchemist still moves at the same joints: A hinged waist, swivel shoulders, swivel wrists, and a swivel neck. They're durable, fun toys that kids have been playing with for 40 years, so that's something, right? They always feel very high quality and just have an amazing charm to them. 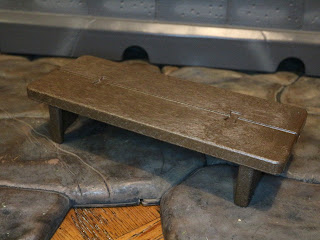 * While Playmobil Klickies are fun, it's the accessories that come with them that really make them. First up is this standard wooden table. It's quite long and really rather solid, making for a perfect laboratory table for the Alchemist to perform his experiments on. Heck, if you don't care for the Klickies themselves, I'm sure many collectors could use the accessories for smaller scaled action figures. 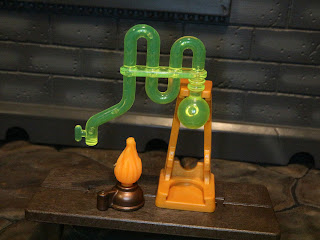 * Next up is one of my favorite Playmobil pieces: The alembic with a stand, a burner, and a flame. To really give his laboratory some atmosphere you gotta have lots of high dollar alchemy supplies, right? I actually took a bit of chemistry in high school, so I'm most familiar with these kinds of things from there; any other knowledge of alchemy I have comes from The Elder Scrolls, the film As Above, So Below, or the video game Shadow of Destiny. Anyways, the alembic is translucent green and the small burner with a removable flame slides into the base to heat the chemical you wish to distill. 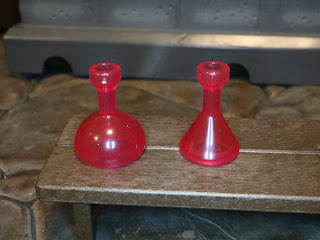 * The Alchemist contains two flasks in his collection: A volumetric flask (on the left) and an Erlenmeyer flask (on the right). The stems of the flasks easily fit in the Alchemists hand and the translucent pink color just looks really, really cool. 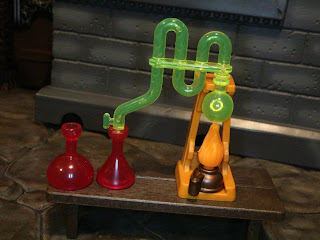 * The whole setup with these alchemical accessories is impressive, right? I love how the mouths of the flasks connect to the tube of the alembic. It is just such a fun feature! 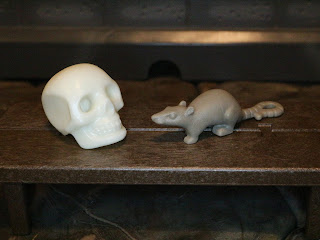 * To add another layer of creepiness to the set, you also get a skull and a rat. The skull can sit around on the table or any other nearby shelf while the rat scampers underfoot. Playmobil does such a great job of creating atmosphere with their sets and these little inclusions are part of the way they accomplish that task. 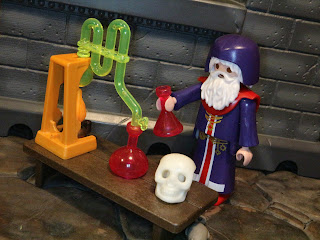 Considering this is a $5 dollar toy, this is a Great and a 1/2 set. I love the amount of extras you get with the Alchemist, particularly that cool table. You can really combine these with other sets to make for some cool displays and setups. Heck, I'm sure many of these pieces would go well with other toylines, especially if you gave them a paintjob. Playmobil has a unique charm and it is kind of a shame I've only ever reviewed one of their items before. They've released some great product this fall, though, so don't expect this to be the only release. I believe that some big things are in store for Playmobil themed reviews this month...