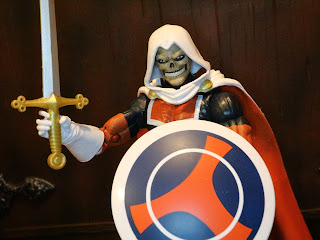 Who is a highly skilled comic villain co-created by George Perez that first appeared in 1980, uses multiple weapons (including a sword), wears orange and dark blue, and is decked out in pirate styled boots? Whether you said Taskmaster or Deathstroke, you would be correct! While they're distinctly different characters, they sure do have a lot of similarities, don't they? Did you know that for a short while Taskmaster had a secretary named Wilson while Deathstroke had a secretary named Masters? OK, I may have made that part up (so far as I know, anyways). A couple of years back Hasbro released a modern Taskmaster as part of the Captain America series of figures who was released under the banner "Mercenaries of Mayhem" alongside of Demolition Man. This classic version of Taskmaster was released earlier this year in the Thanos Build-a-Figure series as part of the movie tie ins for Infinity War. I owned the Marvel Universe version of Taskmaster as one point (I've since sold probably 95% of my Marvel Universe collection as I just like the Legends figures better) so this was my chance to get the character back in my preferred scale. Let's check out this classic rendition of Taskmaster after the break... 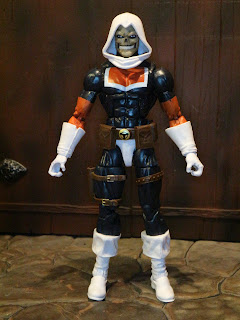 
Accessories: Cape, pistol, sword, shield, and the right leg of the Thanos Build-a-Figure. 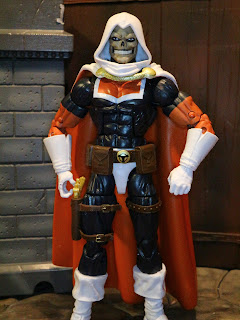 * I love the classic look of this figure! The navy blue, burnt orange, and white just look so good together and make for a very impressive looking action figure. Taskmaster has fairly clean paintwork overall and a pretty cool cape that is removable if you pop his head off (which is quite easy to do). He uses the slim, muscular body that many other figures utilize as well, which works quite well for this agile warrior. 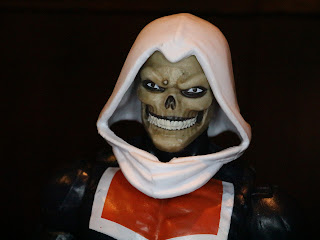 * I'm always down for a skull faced action figure and it was this aspect of the toy that helped to really capture my attention. The headsculpt is really good, especially the sculpted teeth and the menacing eyes. The hood isn't removable (it seems to be permanently attached to the head) but it is positioned quite well, so that's a plus. 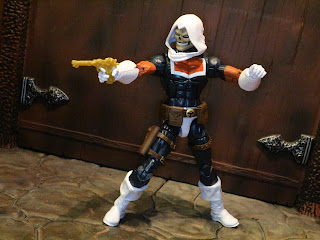 * Taskmaster has the same great articulation you demand and Hasbro delivers with their Marvel Legends toys. He's fun to pose and play with and feels really, really sturdy. 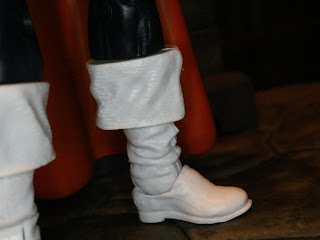 * He's also sporting pirate boots! I know these are kind of a staple of a lot of the late 70s/ 80s characters but I still love them. They just looks so... comic booky. 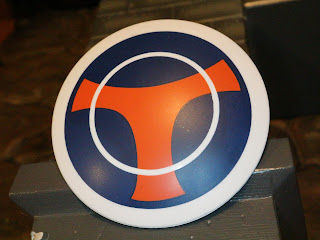 * Taskmaster carries a shield. It's pretty much the same model as Captain America's shield but it has the Taskmaster logo on the front. The paintjob is nice and clean and looks really sharp! On the back is a folding cuff so you can place the shield on Taskmaster's forearm. 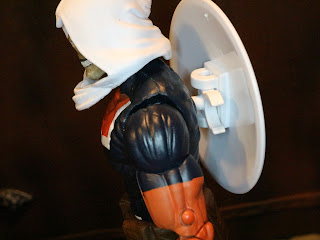 * Like Cap's shield, Taskmaster's handle folds in to expose a peg that can fit into a hole on the figure's back. If Taskmaster isn't wearing his cape he can tote the shield around just like this. That's a nice little extra, don't you think? 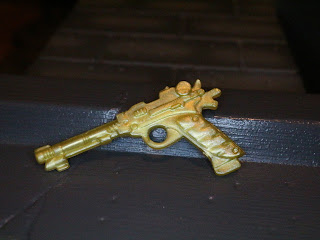 * Taskmaster comes with a pistol and a sword, both of which came with the Baron Zemo figure from 2013 and which have been reused by many figures over the years. This isn't my favorite pistol for most Marvel Legends characters as it seems a bit too fancy but I like it with Taskmaster. I also kind of dig that it's gold. You know, it's kind of a prestige styled status symbol for him. 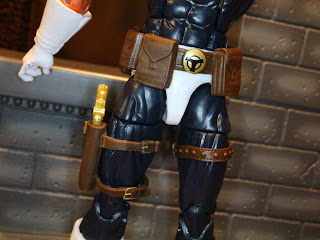 * Taskmaster's pistol fits in the holster on his right hip like a charm. He's also sporting a cool utility belt with lots of pouches and a classy little version of the Taskmaster symbol right on the buckle. 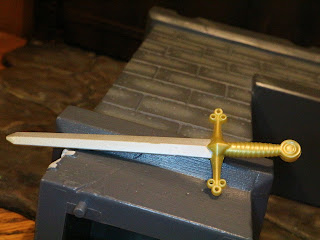 * Here is Taskmaster's sword. Again, this model has been included with many other figures but it still looks good. It also matches the pistol since the handle is gold (while the blade is nice and sharp looking).

* Also remember that if you're buying this guy new, you're also going to get the right leg of the MCU Thanos. I paid about $10 bucks less for mine, so that piece wasn't included. 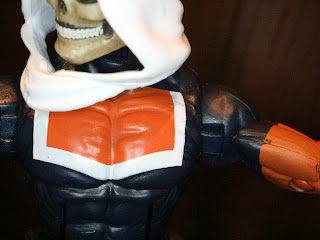 
*  Like with Carnage, Taskmaster also has overly tight shoulders that are a real pain to move. I believe both of these guys use the same body mold so that must be a flaw of that mold. Hopefully Hasbro will fix it or phase it out soon. 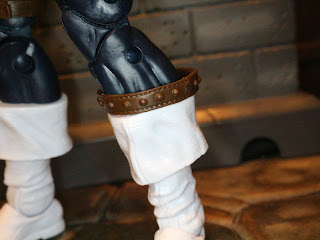 * Taskmaster has this little strap on his left leg that keeps falling down. It's not removable, as it won't fit over his belt, but it just doesn't want to stay in place. How impractical!

* Taskmaster is usually depicted as being incredibly well armed and wielding a bow. Where's his bow and arrows? That seems like a pretty big miss here, especially considering how much of this figure is reused. 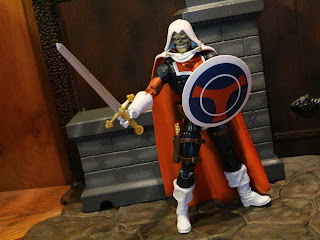 Taskmaster is another very cool Marvel Legends Series figure. He's a great classic take on a popular and cool character and he turned out well. I do wish he'd come with a few extra weapons though, but he's still pretty loaded with accessories. The Infinity War tie in series are starting to disappear from retail shelves so if you want this guy now is the time to act. Some resellers have been marking his price up again as he's starting to get a bit more scarce. Of course, if you're not building Thanos then look for him loose and save some cash. Other than exclusives like the Fantastic Four and Silver Surfer, I'm not sure I've paid retail price for any Marvel Legends figure this year. You can find some good deals!


This is the first action figure of Taskmaster I've reviewed on the site! More for Marvel Legends Series reviews, check out the following: