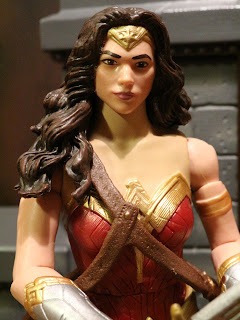 So, going into Justice League who do you think the bigger draw is? Ben Affleck as Batman or Gal Gadot as Wonder Woman? Pretty difficult choice, eh? Anyways, today I'm looking at another figure from Mattel's DC Comics Multiverse: Justice League series and, let me warn you, it's going to get rough. It has nothing to do with Wonder Woman, though: It's about the way Mattel is handling this line. Here's the problem: Mattel has pretty much released the exact same figure that they released earlier this year for Wonder Woman with nothing new except for a weaker headsculpt and a new Collect & Connect piece. I am generally fine with repacks. Sometimes a character is popular or a certain figure becomes extremely rare and a company wants to get the toy back out to fans. Hasbro is getting ready to do it again for Star Wars: The Black Series, as we'll see repacks of the OT Stormtrooper and the 40th Anniversary Darth Vader alongside of new figures of Rey, Luke Skywalker, and Hera Syndulla. No problem. I already own those figures and I can pass them up. The problem with Mattel's Justice League line is that in order to build the film's (presumably) lead antagonist, Steppenwolf, you're going to have to buy every figure in the set. And, let's be honest, considering the track record of action figures from DCEU films, unless you're a main hero, Harley Quinn, Deadshot, or the Joker, you're probably not going to get another action figure released. The release of Justice League should be a major event for DC, Warner Bros., and Mattel, but Mattel is making it feel like leftovers from the previous DCEU films. I'm going to rant a bit during this review, something I don't feel like I do often, but I think it's important. Rather than craft an incredible new figure of Wonder Woman, Mattel took a previously released figure, slapped it in a new package, and said "Good enough." Weak! Read on to take a closer look at the figure after the break... 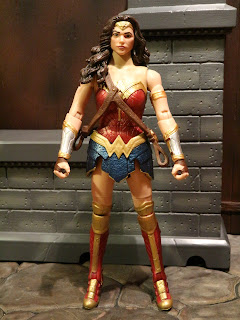 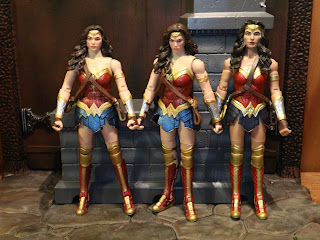 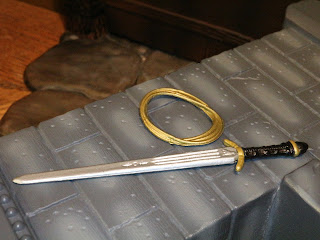 * Wonder Woman includes two accessories: Her Lasso of Truth and her modern sword. It's redone a bit from the BvS line with weaker paint applications. Not terrible, but there is definitely a lack of weathering here. 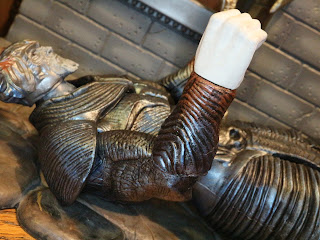 * Each figure in this six figure series includes a piece of the Collect & Connect figure Steppenwolf. Steppenwolf's right arm comes with Diana. I'm still in the process of building mine, so I'll review it once it is complete, but for now I'll just say that I always appreciate when a Collect & Connect piece is included. Of course, this is the only new thing you're really getting with this figure. 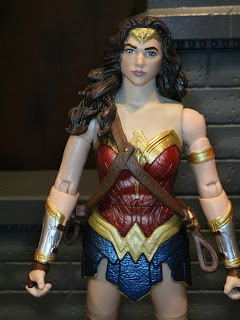 * Besides a questionably new headsculpt, this is the same figure Mattel released less than three months ago with a new Collect & Connect piece. That can't be stated enough. Knowing that in order to complete the film's primary antagonist you would have to purchase this figure Mattel still did nothing new to make it standout. Energy effects? Bracers with bullet reflecting effects? A different paintjob? A more extreme expression on her face? An unwound lasso accessory that can be looped over another figure? A shield? Nope. Nothing. I know companies use repaints and repacks to save money on expensive tooling, but this is ridiculous and inexcusable.

* By the way, Wonder Woman doesn't include her shield. 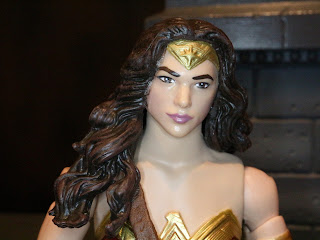 * OK, I'll admit, this isn't a bad headsculpt. It's either just not as well defined as the TRU exclusive from earlier this year. I'm not sure if it's a totally new sculpt or just a less defined recast, but it feels like a step backward. Not as far back as the BvS headsculpt, but less impressive than the sculpt on a figure released 3 or 4 months ago. 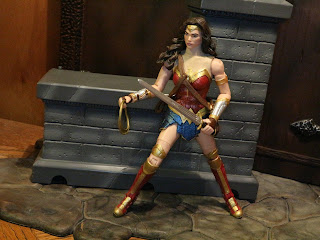 If you just want the best Mattel movie Wonder Woman figure, go pick up the Toys R Us exclusive Wonder Woman; they're still pretty easy to find. If you don't have that figure and want to build Steppenwolf, this one isn't a bad figure. It's just aggravating that Mattel did nothing new with this one. If you're buying this one as your first Mattel WW in thus outfit, she's a solid Good figure. If you've purchased the previous release, this just feels like Crap and a 1/2 since you're rebuying a figure for a new build-a-figure part. Maybe Warner will start changing costumes regularly from now on so Mattel has to give us something new each time they release a toyline. That would work, wouldn't it?