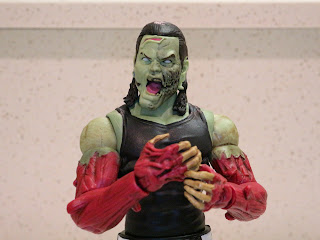 Guess what we got lined up for today? Another WWE Zombies review! Today I'm checking out he Zombie version of Jeff Hardy. Considering the crazy and awesome stuff the Hardy Boyz come up with, it seems like an actual possibility that they could become zombies at some point and continue to wrestle in matches. Seriously, if anyone would try that gimmick and make it work, it would be these guys. Jeff Hardy is a very original, very popular talent who has been wrestling since the mid 90s. While he returned to WWE last year, Jeff has wrestled with nearly every other promotions that you can think of. He's a popular guy and a great choice for series 3 of the over the top WWE Zombies line. Let's check out zombie Jeff Hardy after the break... 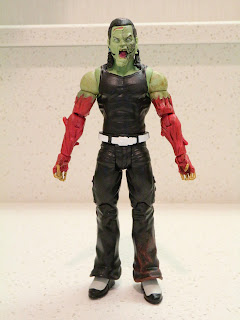 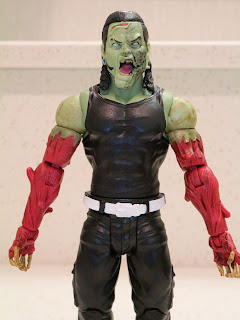 * I love the look of this figure. The green tone of the zombified Jeff Hardy's skin goes together well with his black outfit and his bloody red arms. Jeff's shirt isn't just painted on, either; it's sculpted as part of his torso. His somewhat baddy cargo pants even have visible pockets on them. Even if you're not a WWE fan, Jeff Hardy makes a darn fine looking zombie and just seems like a fun, creepy figure. 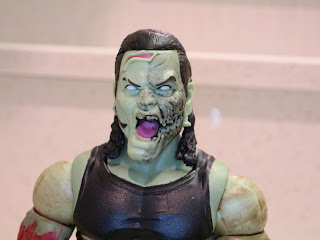 * The headsculpt is really good and, surprisingly, looks a lot like Jeff Hardy. While Mattel definitely makes these figures look "weird" and monstrous, they do capture some of the prominent elements of the Superstars. This figure really has Hardy's facial features, hair, and gauges alongside a broken jaw, missing teeth, ghoulish white eyes, and a big slice across his forehead. To be honest, though, Jeff Hardy has come to the ring wearing stranger attire than this. This is kind of a more mundane look for him, don't you think? 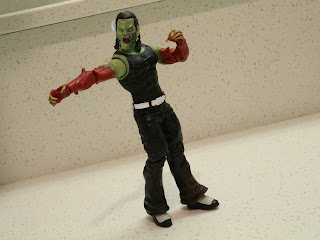 * Jeff has the Basic articulation scheme fro Mattel's WWE line and thus he doesn't have torso articulation and only has swivel hips (his ankles are swivel/hinge joints, probably due to the long pants sculpt used here). He's still quite well articulated, particularly in the arms, and he's lots of fun to play with. These are sturdy, fun action figures that kids who love gross stuff should go nuts over. 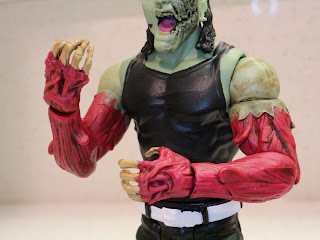 * Jeff Hardy often wears long sleeves or arm sleeves to the ring, so to pay tribute to his style this zombie version of Jeff Hardy has... no skin on his arms? Yup! It's actually pretty cool as it does call to mind the arm sleeves he usually wears. The details on his exposed flesh look pretty impressive and I love the bony fingers poking out. Ick! 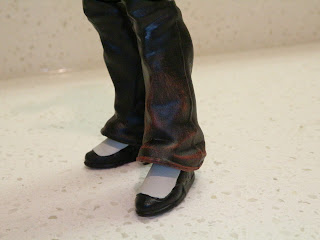 * It's not a big deal, and it is rather tough to see in the picture for some reason, but Jeff Hardy has blood (or some other mysterious substance) on his left pant leg. It's a pretty cool dry brush effect that just adds a little something extra to the spookiness! 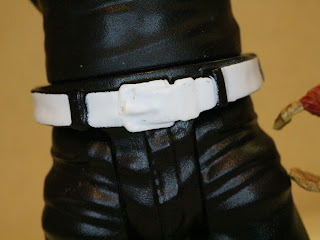 
* Jeff's belt looks a bit gloppy. Just a little silver paint on the buckle would have really helped this to stand out a bit more (in a good way). 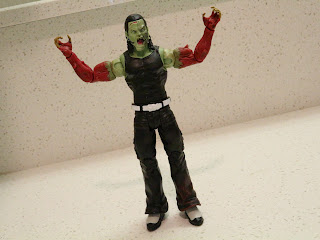 The WWE Zombies line continues to please and Jeff Hardy is another solid entry in the series. These are quite fun and they're apparently one of those things you either love or loathe. Some wrestling fans hate these with a passion while other fans and toy collectors dig their craziness. I love the craziness and I'm all about this Good and a 1/2 figure of Jeff Hardy as a zombie. If the WWE would actually make this a storyline, I'm probably go nuts over it. How crazy would that be right?


This is the first action figure of Jeff Hardy I've reviewed. For more WWE Zombies action figures, check out the following: