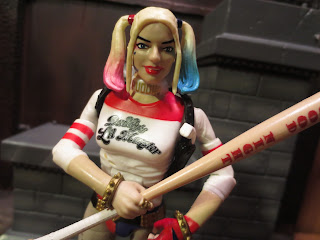 Last week I reviewed the 12 inch Harley Quinn from the DC Comics Multiverse series and today, as part of a big run of Suicide Squad coverage, I'm reviewing the first 6 inch Harley Quinn from the basic series. The closer we get to Suicide Squad the more excited I'm getting! I really think this movie has some incredible potential and it's definitely a film I'm going to see as early as possible (the last film that warranted an opening viewing for me was Civil War). Mattel seems to have a nice selection of Suicide Squad product being released including exclusives with three retailers (Amazon, Toys R Us, and Wal-Mart) but thus far I'm finding it very hit or miss as to if retailers are stocking their stuff yet. Toys R Us seems to be the most consistent but Target and Wal-Mart seem to be really lacking. Fortunately I found a Wal-Mart that had one of the end-cap displays with the Suicide Squad merchandise and I picked up all of series one and both exclusives in one go. Harley here was part of that epic score and I'm excited to finally be reviewing her. Ready for a closer look? Then join me after the break... 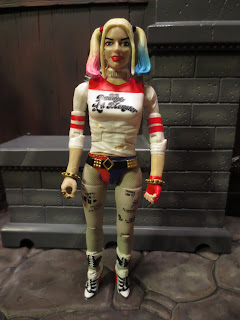 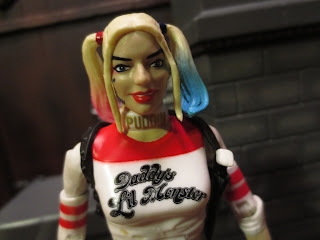 *I've seen a lot of people bash this likeness but, to be honest, I don't think it's that bad. It's not an exceptional Margot Robbie likeness or anything but it's clearly recognizable as Harley Quinn from Suicide Squad. Think of it as the likeness of a really good cosplayer or something. The paint's good, the tattoos on the face are neatly printed and legible, and the printing on the shirt is neat and clean. She looks pretty good to me. 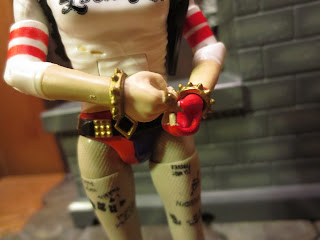 * There are plenty of cool little details all over the figure that definitely will make you appreciate the fact that Mattel has given Harley a unique sculpt rather than trying to reuse something older. Factoring in the spiked bracelets on her wrists, the funky ring on her right trigger finger, the tears in her shirt, or her studded belt, all of these pieces just add up to capture Harley's unique fashion sense. 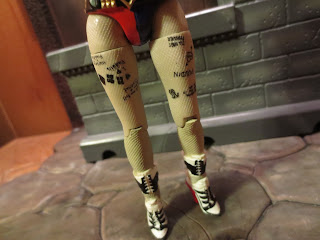 * Handling see-through clothing is tricky on action figures that don't use soft goods for clothing. Mattel has used actual fishnet material for stockings on the DC Universe Classics Zatanna and Black Canary and the results were so-so. I like what Mattel has chosen to do here: Paint the leg a bit darker and give it a fishnet texture. It's not a bad compromise and, at a glance, definitely conveys the idea of fishnet stockings. The odd scrawling on Harley's legs is also present and is really quite legible, even with the smaller size. 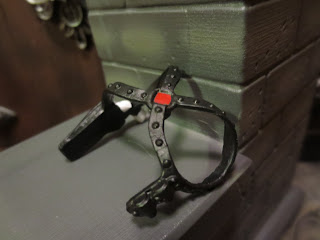 * Harley's shoulder holster is removable, which is a pretty cool and unexpected feature. It does give you the chance to have two separate looks for the character in one package. There are also two revolver speedloaders on the right side, which is a cool little detail since Harley uses a custom revolver. 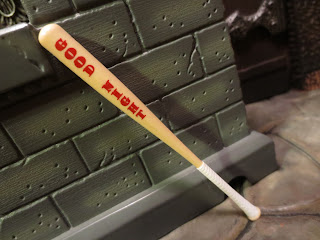 * This version of Harley Quinn comes with her trusty baseball bat. It's not the most detailed sculpt although it does have the handle wrappings sculpted and given a paint application. The words "GOOD NIGHT" are also painted on the side. The accessory fits really well in Harley's hands and looks good on display with her. BTW, if you're interested in Harley's classic mallet, check out the Toys R Us exclusive version. 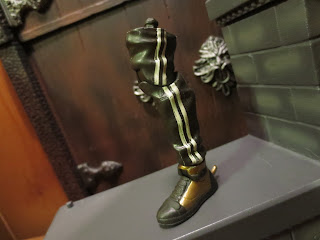 * Harley includes a Collect & Connect piece for Killer Croc (or just Croc as the packaging calls him), something I always consider a plus. She comes with Croc's left leg. I'm planning on building the figure and I'll review him as soon as I have all of the pieces. Like the Batman v. Superman grapnel blaster, Croc also has an alternate build that can be accomplished by buying the six main figures in the line and three of the exclusive figures. He doesn't appear to be that large of a figure but that seems to match his appearance in the film. 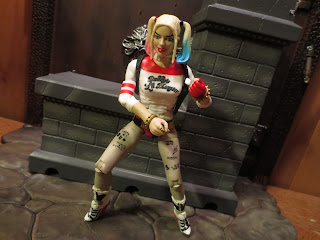 * While Harley's not fragile or anything, I did have a few problems with the figure. The arms are great and have a nice range of motion but the legs feel very stiff. It took forever to get Harley's right knee moving, also. I really thought the joint was fused together. Harley's articulation is very so-so in terms of the range of motion we get, particularly on her ankles. Due to the lack of ankle movement and her high-heeled shoes, she's very difficult to pose. 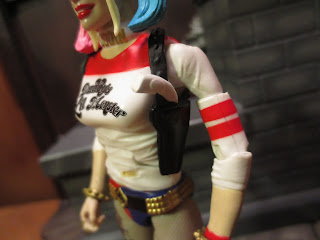 * I really wish that Harley's unique pistol were a separate piece that could be removed from her shoulder holster. Considering that 1/18th scale Star Wars and G.I. Joe figures have had functional holsters for at least 15 years now, I find it inexcusable for a 6 inch scaled figure to not have this functionality. 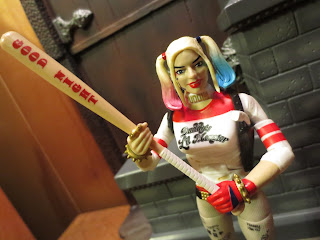 While I collect almost anything and everything Batgirl, I pretty much confine my Harley Quinn collecting to action figures and the odd POP! figure. I'm a huge Harley fan and, as someone who remembered her debuting on Batman: The Animated Series, I've loved seeing her make her way to the top of the superhero/super-villian ranks. While this isn't a perfect Harley Quinn figure, I really do like it. It's a much cooler toy than most of what you'll find at mass market retail and is easily a Great figure, despite the articulation limitations. While this version is going to have a ton of action figures made based on her likeness (their are already versions of this costume coming from MAFEX, S.H. Figuarts, DC Collectibles, and Mezco's One:12 Collective) this is the first one available and you can snatch her up while out on a trip to your local convenience store. That's a pretty cool thing in my opinion. She's fun and does look good on display; she's just not as dynamic as she should be.

I've reviewed plenty of other DC Comics Multiverse figures as well, including: