Action Figure Review: Quakke from Masters of the Universe Classics by Super7 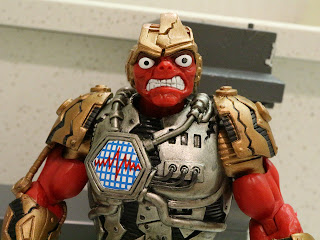 If you read my review of Karg the other day than you know that Super7 has gained my confidence and I'm back in the Masters of the Universe Classics game. Top be honest, it took Super7 a year or more to get "new" Masters of the Universe Classics figures to market and so while Quakke is part of the first series of figures from Super7, he was only released earlier this year. Quakke has long been one of my most wanted figures as while I'm not a huge fan of the New Adventures of He-Man cartoon, I love the toyline. I had Quakke as a kid and he was one of my favorites. The Evil Mutants are a great faction and Mattel did a nice job at building them up, particularly considering the relative unpopularity of anything related to the New Adventures of He-Man.  Quakke is an impressive looking figure, though, and his bright colors and cool gimmick make him a nice fit with the rest of the line. Let's check out Quakke after the break and see how cool he really is... 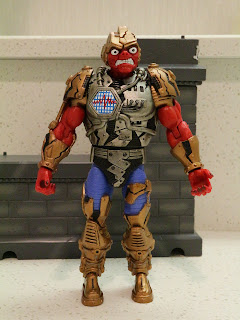 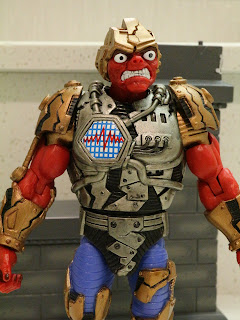 * Quakke is one of those figures where not only did Super7 and the Four Horsemen do a great job of translating the vintage figure but they made the design look even better. Quakke has a very cool color scheme and the mixture of his bright red skin with the metallic armored bits definitely stands out. The paintwork on Quakke is extremely neat and clean and seems perhaps a bit stronger than what Mattel offered. 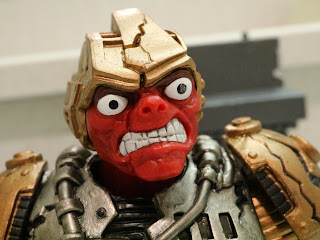 * Quakke's headsculpt is filled with personality. I like the two oversized eyes (which are themselves different sizes) and the angrily gritted teeth. Quakke just seems like a guy' who is pissed all the time, y'know? 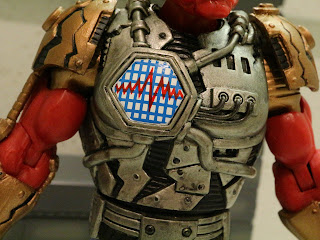 * Quakke's armor is really well done. It's a softer separate piece that covers a basic torso but the level of detail in the sculpt and the paintwork, including lots of weathered elements, makes it seem truly impressive. The shoulder pads are attached and are also flexible, allowing for shoulder movement. I love the little panel on the chest. Is this perhaps a Richter scale readout or just Quakke's vitals? 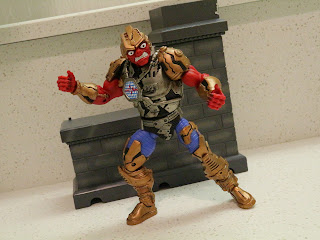 * Quakke has solid articulation. It's as good as what Mattel offered in MOTUC but the ankles are swivel/hinge joints that allow for even more movement. Quakke feels as durable and toy-like (in a good way!) as any other figure released by Mattel, so that's very good news. Quakke is really fun to fiddle around with! 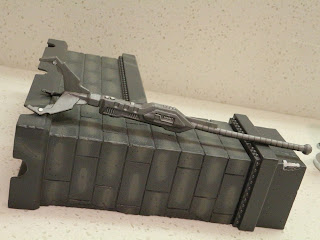 * Quakke comes with the Grabbatron Meteor Mace, a more detailed version of his vintage accessory. It's a long grappling claw that is designed to pick up meteorites. The sculpt is a but chunky but nicely detailed and it even features a few silver paint apps over the various wires and panels. 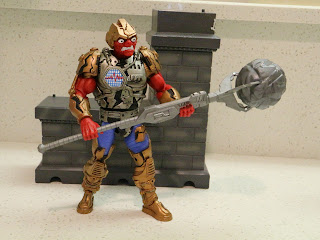 * The three prongs of the Grabbatron Meteor Mace can be used to pick up the included meteor. Quakke can stand around wielding this weapon, using it like a massive club. 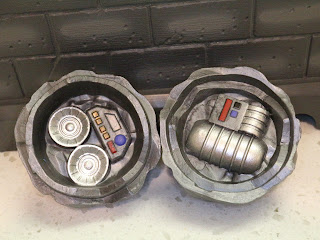 * The meteor breaks into two pieces to reveal... lots of techy looking stuff. Some sort of explosive devices, perhaps? Hidden surveillance equipment? Who knows! The painted details inside are quite colorful, making this a very impressive accessory overall. 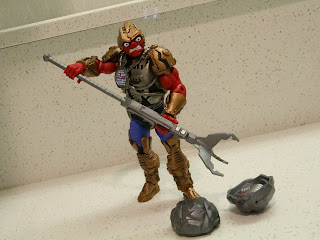 I really like Quakke and he's another Great entry in the line. I've been waiting for him to reappear in Masters of the Universe Classics for quite a few years and now that I have him, I'm thrilled. He's a fun figure with solid sculpting, colorful paintwork, and some great accessories. Super7 definitely is asking for more per figure than Mattel did but I do feel like the quality of their 2018 releases might be of a but higher quality than many of Mattel's efforts. I'm excited to see what they'll reveal in Series 3 of the Collector's Choice series of MOTUC, as it would be nice to knock out at least one more New Adventures character!


This is the first action figure of  Quakke I've reviewed. For more Masters of the Universe Classics figures from Super7, check out the following:
Karg