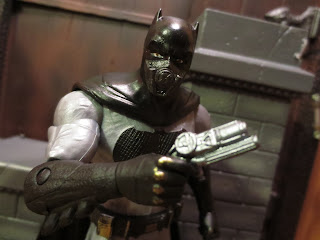 I have high hopes for Suicide Squad and the fact that we're going to get another appearance from Ben Affleck's Batman has me pretty pumped. While I definitely anticipate (and hope) that the movie focuses on the Squad themselves, it will be pretty insanely cool to have Batman show up for a scene or two to do his thing. Who know what we'll be doing? All I know is that A. It'll be cool to see him, and B. Mattel was thrilled because it gave them a chance to release another Batman figure. Well, not a new Batman figure: This guy is basically the same as the Batman V. Superman Batman figure released earlier this year. The only differences are some new headsculpts, a slew of new accessories, and a piece to the Killer Croc build-a-figure. Is this guy worth picking up or is this a simple double dip on Mattel's part? Read on and find out after the break... 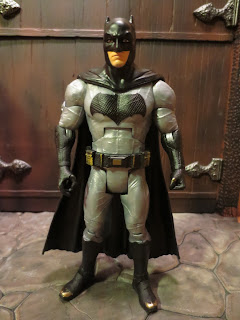 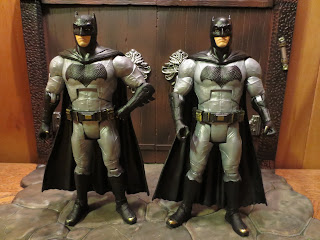 As I mentioned in the intro this Batman figure is almost exactly the same as the figure from the Batman v. Superman DC Comics Multiverse series released earlier this year. Can you tell which figure is which? The only difference is the texture on the masks (the new one, the one on the right, is smoother) so go ahead and read that review if you're interested in the figure. I'm only going to focus on the changes here. 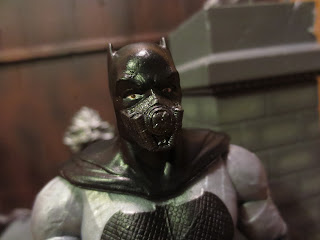 *Probably the most striking new thing about this figure is that Batman actually two interchangeable heads. The first head is a pretty standard Batman head but the second has a cool gas mask over the mouth. The heads swap pretty easily and getting a new head definitely helps to make this feel like a truly new release. 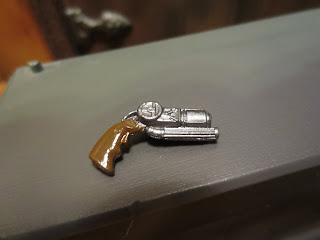 * The other thing that makes this figure feel like more than just a simple rerelease is that Batman comes with some pretty solid accessories. First up is his grapnel gun which none of the BvS figures included. It's actually a really nice sculpt with some decent paint applications. I'm pretty pumped about having this accessory, especially since the BvS Batman didn't include any accessories. 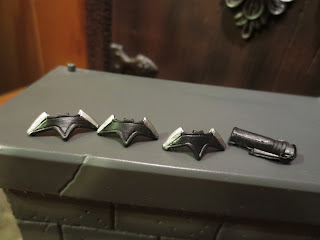 * Bruce also comes with a nice assortment of things to throw at his enemies. There are three very small batarangs (with silver edges) and a gas canister of some sort. Considering that this figure includes a gas mask, it's pretty likely that we'll actually see this in the film. Since Batman can only hold one accessory at a time (his left hand is a fist) you could use these to accessorize some other Batman figures in your collection if you'd like. 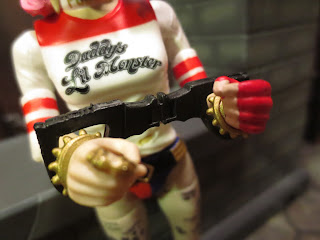 * The last accessory Batman comes with is a pair of handcuffs. They don't have any moving parts but they can fit over the hands of whatever villain you have the Dark Knight facing off against. They have a decent sculpt and are another cool extra that makes this set way more appealing than it would have been on his own. 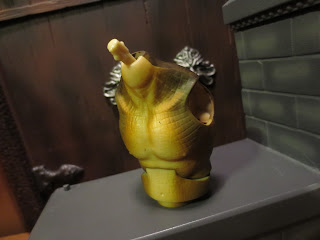 * Bruce comes with the torso for the Killer Croc build-a-figure. Croc doesn't actually seem to be that huge but that seems to be accurate to his film appearance (my screensaver is currently the Suicide Squad lineup and Croc looks to be only a few inches taller than Deadshot). I'm still typically thrilled by build-a-figures (or "Collect & Connect" as Mattel calls them) so it's still a bonus when a line includes them. 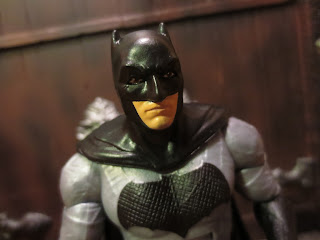 
* The head is different here than the pevious figure (the cowl is smooth without any texture, matching the cape) but I'm not sure it looks any better. It's still a little oddly shaped. 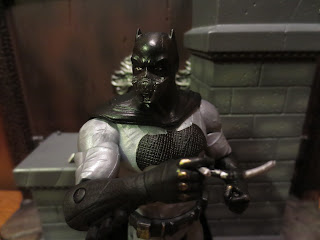 I was prepared initially to really get pissed off since this guy is essentially a rerelease with a new build-a-figure part but you know what? The wealth of accessories and the extra portrait really make this work for me. If you already own the BvS Batman and aren't planning on building Croc this might not be worth your time but, if you want Croc or haven't picked up a BvS Batman yet, this figure has some pretty fun accessories that make it feel like a worthy purchase. I guess I'd give him a Good and a 1/2 rating due to the abundance of extras, especially the cool grapnel gun.

I've reviewed plenty of other Batman figures, including:

Young Justice: Invasion by Mattel
Batman
Posted by Barbecue17 at 7/22/2016