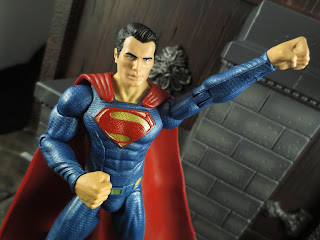 I'm not usually that big of a Superman fan. I mean, I have no ill will towards the guy and certainly respect his iconic status while appreciating the Christopher Reeve films, but I'm rarely going to pick up a Superman action figure or collectible. Prior to the last week or two the only Superman figure I've purchased in years was probably one from DC Universe Classics. Heck, something from DCUC or DC Superheroes was probably the first Superman I ever owned, too. I've bought two Superman figures in the past week though: The Earth 23 Superman (which I reviewed yesterday) and this Henry Cavill Superman from Mattel's Batman v. Superman: Dawn of Justice subset of their DC Comics Multiverse line. What's crazy to me is that Superman is actually difficult to find in Mattel Batman v. Superman line. I saw a couple Supermans back in January when I purchased my Armored Batman figure and haven't seen any since just this past week or two. And Wonder Woman? Forget about it! Mattel is all Batman, all the time, baby. Anyways, I enjoyed BvS:DoJ (check out the 3 1/2 hour podcast I discussed this film on) and decided that I definitely wanted to add this version of Supes to my collection. Ready for a closer look at this figure? Then join me after the break... 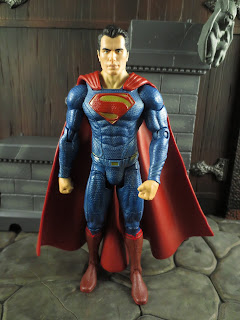 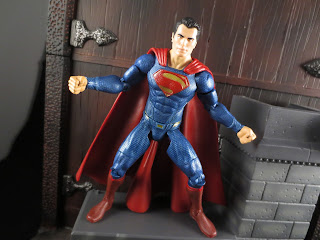 * While I wasn't thrilled with the articulation in some of Mattel's recent TV based DC figures, I really like the articulation on this guy. He's built kind of like a DCUC figure but without the mid-torso hinge. Superman has a pretty decent range of movement, though, and feels pretty sturdy. He's actually a rather fun figure to play around with and put into heroic poses. 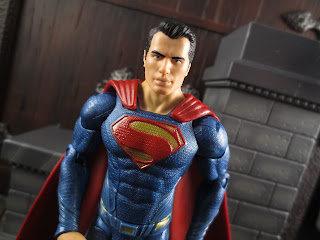 * This guy looks really sharp. You can definitely see Henry Cavill's likeness here which is absolutely a plus. Mattel did a nice job on this one. I have no idea if it's reused or not from the Man of Steel line in anyway, but I'm digging what I got. 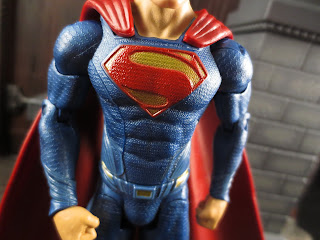 * Not only is the texture of the suit really impressive but the paint job is quite nice, too. There's way more color here than you'd initially think: There are actually blue and red highlights on different areas of the suit that differ ever so slightly from the main colors chosen. It really helps to make things more interesting. 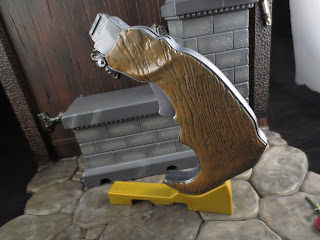 * The eight figures in the Batman v. Superman: Dawn of Justice subset each include a Collect & Connect piece to build a prop replica of Batman's grapnel blaster. This is honestly a pretty cool idea and it's definitely enticing me to buy more than I originally planned.Superman's piece is huge (larger than I expected) and has some decent paintwork on the handle to create a faux wood grain pattern. It's permanently attached to a part of the base via a screw, but I bet you could remove it if you really wanted. 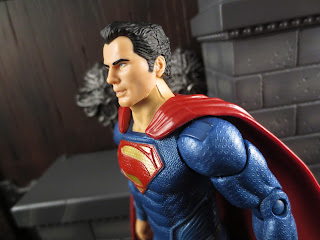 * I'm repeating a problem that pops up on nearly every review of a Superman action figure anywhere but why in the world does this guy not have a neck with enough articulation so he can look forward while in flight? I know this Superman likes to hover (which I can respect) but still, being able to take a classic flight pose would have been both the bee's knees and the cat's pajamas. 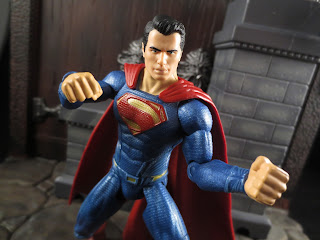 * While Superman really has no use for accessories, your standard action figure does. Mattel should have tried to include something cool with him (besides the C&C part) just to add a little more value to the figure. Maybe one of Batman's various Kryptonite laced traps or the Kryptonite tipped spear from the film's finale might have been good decisions. 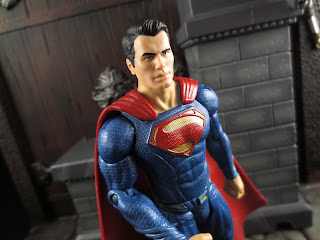 Superman turned out to be a Great figure. While I wish he had an extra accessory or something, everything else about the Man of Steel is impressive. While I'm hoping to pick up a few more of these and build the Grapnel Gun I'm at least glad to have a recent Superman for my DC shelf. You know, so he and Batman can go at it for a little while before talking about their mothers.


The only other Superman figures I've reviewed on here are Earth 23 Superman and Split Cycle Superman from Mattel's Man of Steel line.