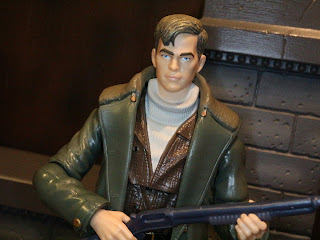 Today I'm looking at Steve Trevor from Mattel's Wonder Women themed DC Comics Multiverse line. Not only is Steve a new figure from the upcoming Wonder Woman film but he's also the first Steve Trevor action figure since the 1976 Mego line and the first in the 6-7 inch scale. Played by Chris Pine in the upcoming film, Steve Trevor is a long time secondary player in the DC Universe and it's pretty cool that we're getting an action figure of him in the line. While DC Comics Multiverse has been fairly uneven with some highs, some lows, and lots of just average figures, the selection has been pretty diverse. Though the Wonder Woman line only includes four standard figures (there seems to be one or two retailer exclusives coming, too), it does offer a fairly decent sized Collect & Connect figure across the series. Steve comes with three build-a-figure pieces to help construct Ares which really offers a bit more bang for your buck. That's something, too, because Steve needs a bit of help. read on and find out why after the break... 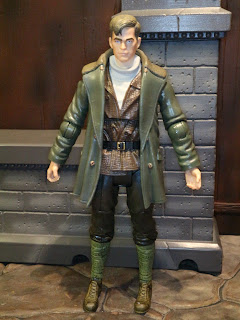 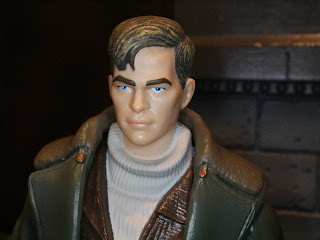 * Let's start with a real positive on this figure: This is a pretty solid likeness of Chris Pine, especially considering this is a mass market release. It's not perfect from every angle but overall the likeness is there, especially the eyes. This shows that Mattel can do some great work and the Wonder Woman line definitely shows some great improvements in character likenesses over the BvS and Suicide Squad lines. 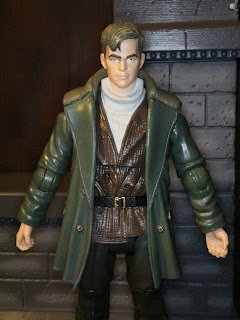 * One of the things that I really like about the Multiverse line is that Mattel uses plenty of unique sculpts in this line. Steve is wearing a pretty unique outfit that features a number of different textures and some decent paint applications. I really like the look of the outfit as he stands out on the shelf. There aren't too many DC figures that look like. I'm not sure he'd fit in well with a modern DC display, but he seems to match his film counterpart well. 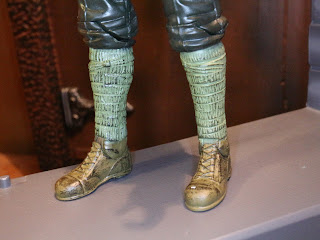 * Steve's wrapped boots are pretty detailed and feature a dark wash that brings out that detail. They look pretty cool. 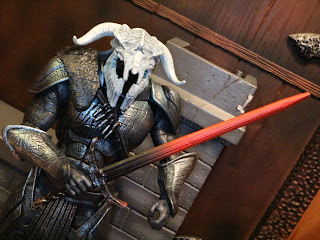 * As mentioned above Steve Trevor includes three pieces for the Ares build-a-figure: The head, torso, and sword. I'll be reviewing Ares sometime next week, so I don't want to say too much, but I do like him. Steve is really loaded with stuff considering he comes with three pieces, so I'm wondering if Mattel thinks he'll be the slower seller in this series. 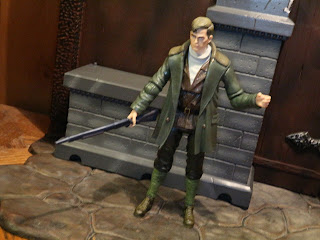 * Steve's articulation is pretty bad. All the standard joints are present but there's little you can do with him. His ankles and hips barely move and there really is no way to make him convincingly hold his shotgun. Mattel really needs to work on the articulation scheme on this line because it is quite possibly its biggest flaw 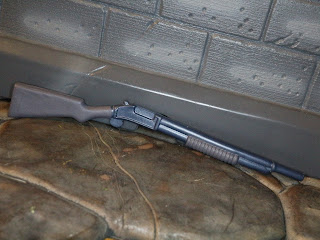 * Maybe I'm just jaded because I've been picking up more One:12 Collective figures, but Steve's shotgun is a pretty weak sculpt. It's very soft without much detail, is cast in a somewhat rubbery plastic, and has the big old "China" stamped on stock on the other side. Why is Mattel the only company that seems to have those massive "China" stamps on their accessories? It's ridiculous! 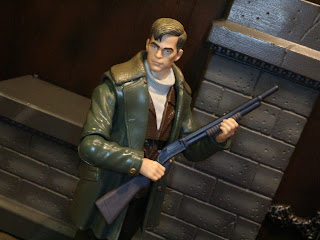 Steve Trevor is a rather nice looking figure, but there's little you're going to be able to do with him. He can hold his shotgun with both hands as if he's racking it, but that's about it. Considering the dude's a soldier, shouldn't he be able to do more? How cool if he could hang out with the likes of Nick Fury, Steve Rogers, and Wonder Woman on your shelves to form a super cool brigade of commandos? As it stands, the sculpt is better than earlier Mattel Multiverse live-action based figures, but the articulation is just as poor, if not worse. If you're planning to build Ares, you'll really need him. Otherwise, Steve Trevor is a pretty Eh and a 1/2 figure.

I've reviewed plenty of other DC Comics Multiverse figures from Mattel, including: