The Revenge of 31 Days of Toy Terror: Pennywise from It by NECA 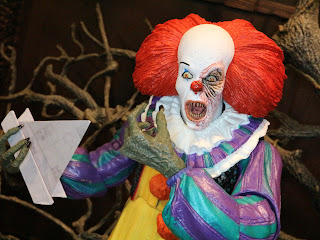 This year's The Revenge of 31 Days of Toy Terror is filled with some real hits, isn't it? Today I'm checking out what very well may be one of the biggest horror action figure releases of the year: Pennywise from the 1990 TV movie It. Based on Tim Curry's portrayal of the evil clown Pennywise from Stephen King's 1986 book, NECA has now released one of the icons of horror that had yet to exist in action figure form before now (although Funko did release a POP! vinyl). While Bill Skarsgård's portrayal of Pennywise in the 2017 film version of It draws from older depictions of clowns, Tim Curry's version is based on the popular birthday and TV clowns of the 20th century. Somehow, that's even more disturbing to me although I do enjoy both portrayals of the character. I'm also enjoying the product that NECA is putting out for both films. I've already reviewed one of the figures from the 2017 film so today it's a look at the classic version. Pennywise is another of NECA's "Ultimate" figures that includes multiple heads, hands, and lots of accessories in a fairly collector friendly box. Ready for a closer look at this creepy clown? Then join me after the break... 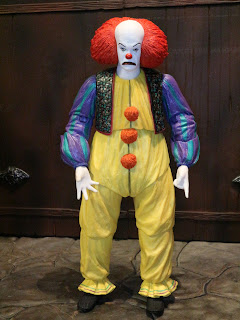 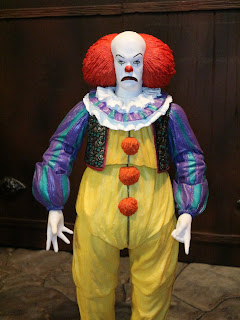 
* Like a traditional looking modern clown, Pennywise is wearing lots of bright, garish colors and is decked out in a one piece jumpsuit that makes his body proportions very difficult to decipher. NECA captured thus look quite well, which shouldn't be at all surprising. I rarely, if ever, see a bad sculpt from NECA. This is an incredibly recognizable figure and should delight/ terrify folks who check out your action figure collection who are terrified of clowns or who remember the 1990 television film It. 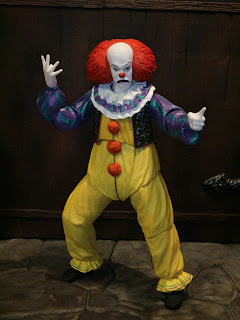 * I actually have a problem with the feet, which I'll get to in a moment, but overall I'm quite happy with Pennywise's articulation. He's not a ninja or a superhero so he doesn't have to be incredible agile. His neck joint gives him a fair range of expression while the arms and hands allow for plenty of creepy poses. There is lower body articulation and it does work just fine although the shape of the body does limit it a bit. 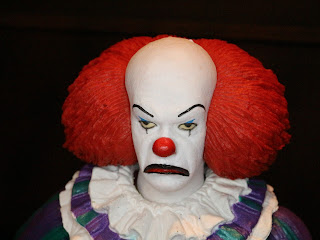 * Pennywise amazingly comes with four portraits! Four! That's crazy! First up is the standard kind of pissed off Pennywise face. He doesn't look happy here and NECA did a great job of capturing the slightly bulbous head and crazy Bozo the clown styled hair here. This is a pretty good likeness here and the strong paintwork, particularly on the eyes, really helps to sell it. 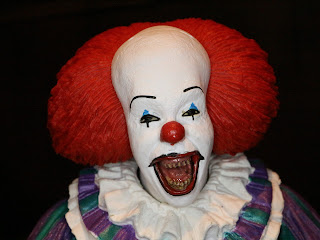 * Second up is my second favorite portrait: The laughing Pennywise. Not only do we get a pretty disturbing Pennywise likeness but we also get a great look at his hideous teeth. Grotesque! I love it! 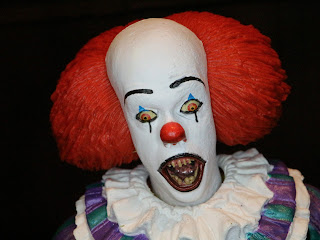 * Third is this very expressive face that captures a somewhat odd expression: Pennywise opening his mouth and getting ready to eat someone. It's pretty scene specific but it turned out really well and shows off his sharp, sharp teeth. Kiss me, fat boy! 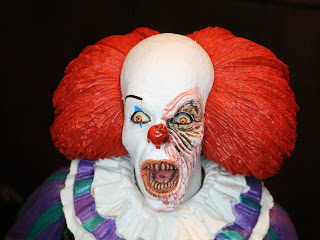 * Last up is my favorite portrait: An angry, injured Pennywise from immediately after he gets sprayed by Eddie Kaspbrak's inhaler. Here Pennywise is angry, injured, and now scarred. It's a great sculpt and definitely makes for the most dramatic appearance when on display. 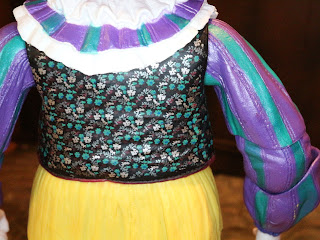 * Pennywise's costume has some really nice paint details. The stripes and stitching on the sleeves are pretty slick while the paint details on the vest are incredible intricate. Excellent work here! 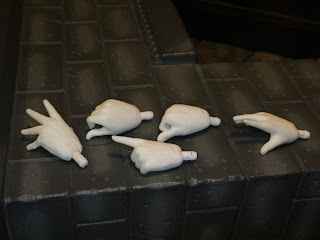 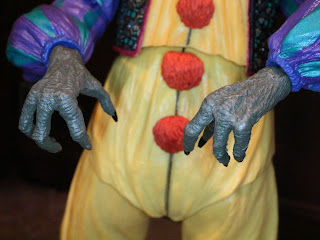 * The other two hands are It's monster hands. Pennywise transforms his hands into these on occasion but I best remember them as looking similar to the hand on the cover of the original hardback version of the book. I remember this copy of It sitting on my dad's nightstand when I was a kid and it always creeped me out! 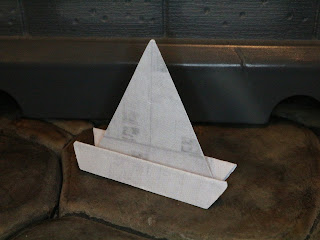 * Another significant item from the film is Georgie's boat. While NECA's Pennywise figure from the new film includes a plastic accessory of the S.S. Georgie, this one is simply a paper accessory. It isn't the most impressive accessory but it is a cool little extra that really helps to make for some great photos. 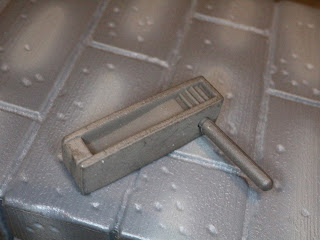 * Pennywise also includes a noisemaker, or a ratchet, a small device that makes a rattling noise when spun around. Pennywise uses this little device and NECA has captured it well. It's a cool little extra that fits easily in the included right hand and allows for even more variety in photo taking and display. 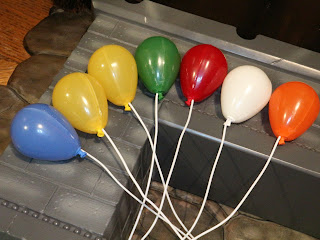 * Last, and certainly not least, is a set of seven balloons, allowing you to reenact this scene right here! The balloons are built exactly like the single balloon included with the 2017 Pennywise figures except you now get seven of them in six different colors (there are two yellow balloons, which looks to be correct from the scene linked to earlier). The balloons are made from a lightweight translucent plastic and have wires for strings, allowing them to look like they're floating. 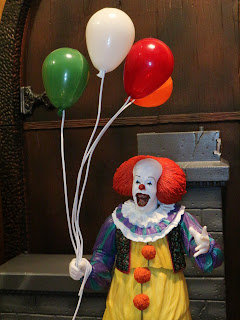 * The floating effect is pretty convincing and looks great. I've noticed that four balloons seems to work best for Pennywise. Any fewer and the balloons don't stay in the hand as well, any more and the hand can't support the weight. 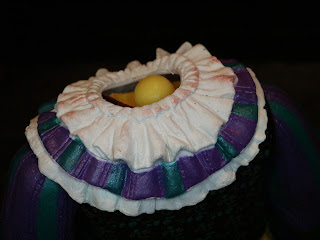 
* It's tough to see from the picture but the paint from Pennywise's hair has rubbed off on the collar pretty severely. It is mostly hidden under his hair, so it's not terribly noticeable, but it is a bit annoying. 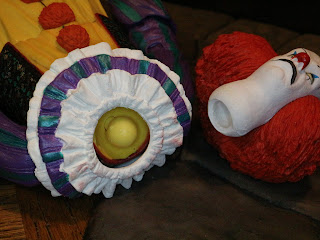 * It is very, very hard to change Pennywise's heads. You are either going to have to use some heat or really push on these. It's a bit frustrating, especially considering how easy most other NECA figures have swapped heads lately. 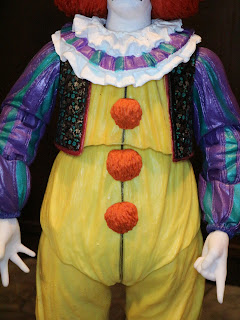 * like mid-torso joints but sometimes they really are very unsightly. That's the issue here as the mid-torso joint really breaks up the look of the sculpt. I think NECA should have made the torso of the jumpsuit a single piece that fit over the body underneath. 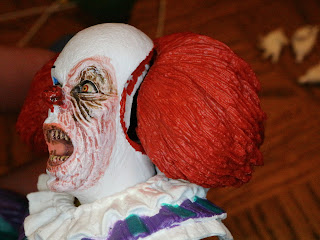 * You know how I mentioned that the headsculpts are incredibly difficult to swap out? What is really frustrating is that I've noticed some of the hair pieces beginning to detach from the heads. They'll sit back in place easily but this is a bit concerning. I'm guessing it comes from pressure that gets applied to the hair when trying to push or pull the head. Be careful! 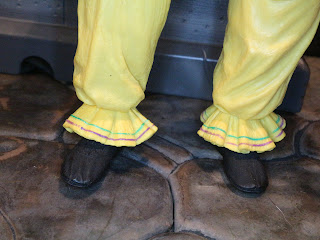 * The feet are balljointed but they are fairly difficult to pose in such a way as to keep Pennywise standing straight up. They're kind of oddly designed and it seems like they could have been made so much better. 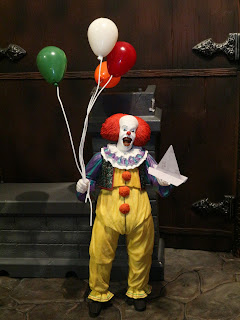 Pennywise comes with more headsculpts and more accessories than nearly any other figure released this year and you can pick him up for around $30 or less. Seriously, I'm having a tough time thinking of any toy that is this loaded. NECA is not playing around with their Ultimate offerings and Pennywise is another incredible release. The sculpt and paint are amazing and really do the character justice. While there are a few weak design choices, overall this is a Great figure and well worth tracking down. If you've been dreaming of owning a Pennywise figure ever since McFarlane Toys' Movie Maniacs line hinted at the possibility of such a toy, then this is the release for you!

If you're looking for more of Pennywise, check out my review of the Funko POP! Pennywise from the 1990 film and the GameStop exclusive 2017 Pennywise.