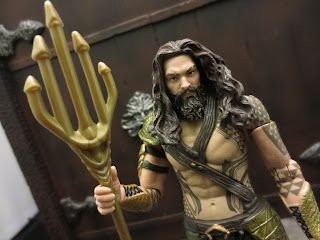 Aquaman is not lame. You're lame if you think that. I love Aquaman and I get so tired of people bashing the character because of a few jokes that shows like The Big Bang Theory and Family Guy has made. If you didn't read the early issues of the New 52 Aquaman, you really should; it nicely addresses the issue of people misunderstanding Aquaman's powers and shows his true strength. Anyways, rant over and on to talking about this figure! Aquaman is included as part of the Batman v. Superman: Dawn of Justice subset of Mattel's new DC Comics Multiverse line which is pretty impressive for a character who appears on one of the posters for the film and yet only appears in the film for like 7 flipping seconds. Jason Momoa looks awesome in this role and I love the redesign but I really thought Aquaman might have a larger part in the film. Maybe they relied on him heavily in the posters and merchandising because they know that people love them some Khal Drogo and Warner Bros. wanted to get in on some of that sweet Game of Thrones money? Who knows? Still, while his appearance in the film is limited that doesn't really detract from my desire to own this figure. I've been looking for it for awhile and I managed to track him down earlier this week. I don't know how many Aquamen come to a case but if it's like any character in this line other than Batman, the answer is probably only one. Ready to go a little... deeper? Read this review and you'll think you're looking at Aquaman! 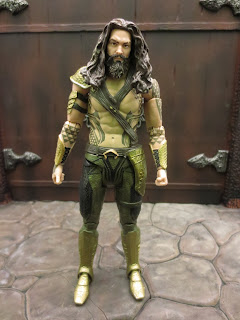 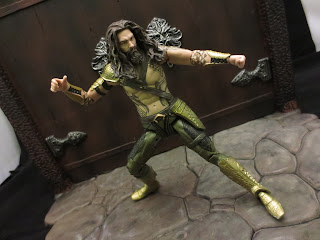 * Aquaman doesn't have incredible articulation but it's still pretty decent. He feels solid, his joints mesh well with the sculpt, and you can definitely get him into some cool poses. If you've picked up any of the other figures in this line or in one of Mattel's Movie Masters line, you should know what to expect for the most part, although I feel the quality is a bit higher. He is lacking a mid-torso hinge, though, but it's a fair trade off for a better looking sculpt in this instance. 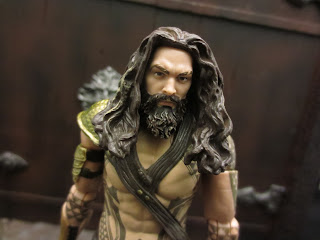 * Check out that headsculpt! Is that wicked or what? *That face you make when someone pisses in the ocean!* Seriously, this guy looks pretty rough and I certainly wouldn't mess with him. I like this direction for Aquaman and Momoa has an awesome ferocity and intensity to lend the character a new feel. Mattel even captured the little scar on Aquaman's left eyebrow! This is pretty solid work in my book. 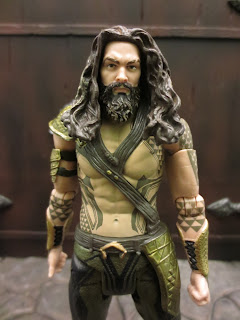 * It's not just the headsculpt that rocks, either: The entire body looks really good. The armor has some incredible detail on it. The chest straps are actually separate pieces of plastic that are firmly attached to the torso and give the illusion of a more three dimensional outfit. There are so many unique textures on this outfit that really convey the mixed metals and materials of the outfit. Of course, some really impressive paintwork helps to sell the look. 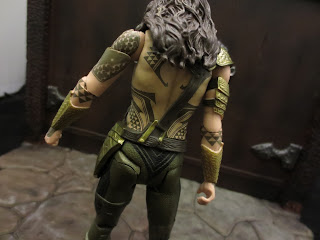 * Seriously, the paintwork is really outstanding all over this figure. His tattoos are really neat and clean, there's a mixture of colors in his hair and beard, and his metallic looking pants have some really cool design on them. The gold for his armor also actually looks metallic, too. This is a really slick outfit and I'm anxious to see Momoa in action wearing it at some point in the future. 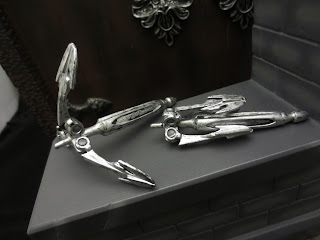 * If you purchase all eight basic figures in the series you'll end up with the pieces to build Batman's Grapnel Blaster from the film. This is only my fourth figure in this series so I'm only about halfway there, but I love the look of these darts for the Grapnel Blaster. They're nicely painted with a dark wash and they're actually articulated. Each prong on these three pronged darts has a hinge so they can be folded up. Pretty sweet, eh? 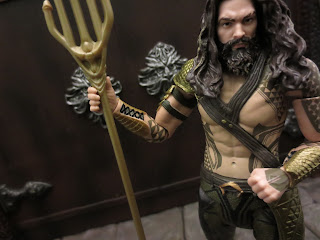 * Aquaman only has one gripping hand (the other is a fist) and this he has a difficult time wielding his trident. The trident is also a little too thin while his grip is a little too wide and open, and thus he just can't get a good solid grip on his accessory. If you have one of the DCUC Aquaman figures, perhaps this guy can borrow one of their tridents? 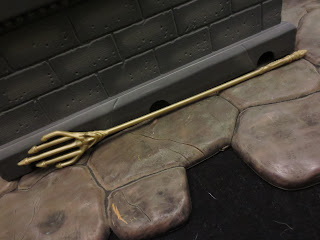 * I don't dislike the sculpt of Aquaman's trident at all (and yes, from as best as I can find a trident can actually have five prongs and still be called a trident) but I do dislike the fact that the plastic it is cast in is so obviously "plasticy" looking. Considering how nice the figure is and how awesome the Grapnel Blaster darts are I really was hoping for better. 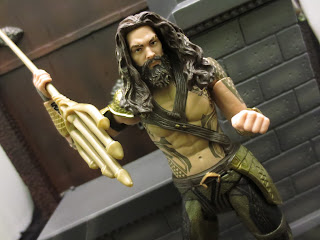 While I'm definitely a bit disappointed in Aquaman's spear and the fact that he can't hold it, I gotta admit that this is a darn cool figure. Maybe it's just that impressive or maybe it's fun to see a new take on a character we don't see in toy form that often but I'm really liking this one. So far I think this guy is the highlight of the Batman v. Superman line. He's a Great 1/2 figure and definitely worth checking out. The sculpting and paintwork are far above what we typically see from Mattel in mass market lines like this and I hope they give props to the good folks who worked on this one. He's quite a catch!


I actually haven't reviewed any other Aquaman figures on the site but I have reviewed another figure based on the likeness of Jason Momoa: Khal Drogo from Game of Thrones! I have also reviewed a number of other figures from Mattel's DC Comics Multiverse line for your reading pleasure: