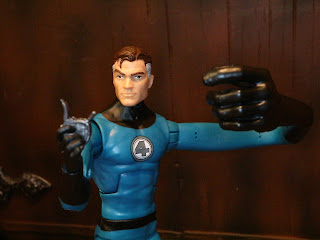 Last year Hasbro released the Human Torch and the Invisible Woman as Walgreen's exclusives. It has been quite a few years since Hasbro delved into the character roster of Marvel's First Family so this was a big deal. Of course, there are some of us who probably were holding out to see if all four members of the Fantastic Four were released. A couple of weeks ago I was in my local Walgreen's and noticed all four members of the Fantastic Four sitting in the store at one time. Individually most of these figures didn't wow me the way that some do but finally seeing the Thing alongside the rest of the team caused me to grab all four at once. I really don't think I've ever had a complete Fantastic Four. Back in the old Toy Biz line I had everyone but the Thing and then, with the Marvel Universe 1/18th scale line I had Johnny and Ben, but no Reed or Susan. Finally, the whole team at once for me! Hasbro has done an excellent job with these and I'm going to be checking out at least this year's releases of the Thing and Mr. Fantastic. I'm starting with Mr. Fantastic, AKA Reed Richards, today. If you thought the 31 Days of Toy Terror review for today was too spooky then maybe this is more your speed, eh? Let's all take a good stretch and then check out this figure of one of the smartest men in the Marvel Universe after the break... 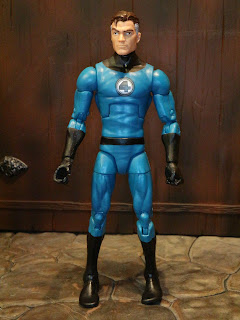 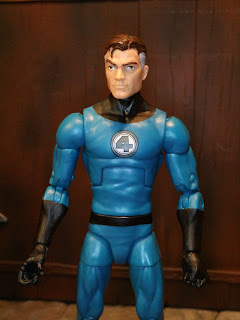 * Hasbro has done exactly what I believe most fans wanted by delivering a straight up, no frills version of Mr. Fantastic. This is a great, standard version of Reed Richards in a normal looking suit and it just works. He looks perfect here. While most of the suit details are painted on, the paint work is very near and clean. Reed looks "fantastic" alongside of his teammates. 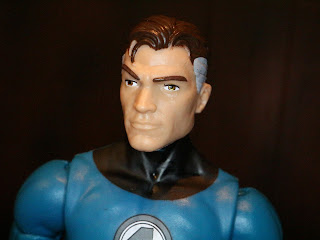 * The headsculpt is quite nice, too, and features Reed's distinctive premature graying along the sides of his hair. I like the somewhat intrigued, possibly just a bit self assured expression look for Reed. It's probably the best Mr. Fantastic Headsculpt to ever grace a Marvel Legends line. 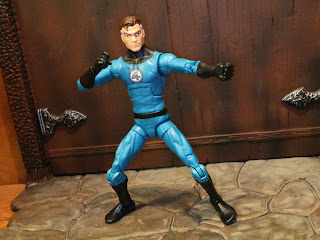 * Hasbro has an excellent articulation scheme for their figures and Reed Richards is just an excellent example of how well made Hasbro's toys are. He's well articulated and extremely sturdy, featuring none of the overly rubbery plastic in the double hinged joints that sometimes appears in some Marvel Legends figures. He's a solid, fun toy and you just can't beat that, can you? 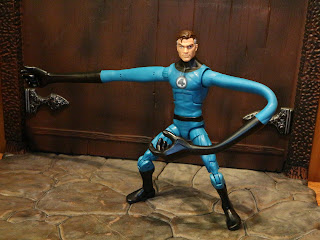 * To make him even more fun, however, Hasbro included an extra set of interchangable arms that depict Reed's flexibility. The standard arms are removable at the shoulder and the stretchy arms swap right in. While the shoulders feature swivel/hinge joints, the rest of the arms are bendable. They look awesome and make for a very fun play feature. 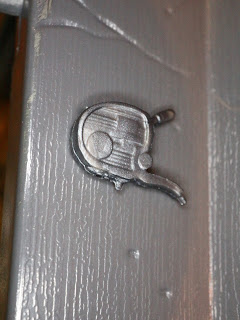 * Last, and yeah, kind of least (but still cool) Mr. Fantastic comes with the Ultimate Nullifier. I'm not always that up on Marvel stuff so I had to look this up. It's a device that's been around since issue #50 of the original Fantastic Four series and is used to intimidate Galactus. It's a powerful device and apparently an important element of the Fantastic Four universe, so good job including it here, Hasbro (although I really wanted him to have the flare gun from the old Toy Biz Marvel Superheroes Mr. Fantastic). 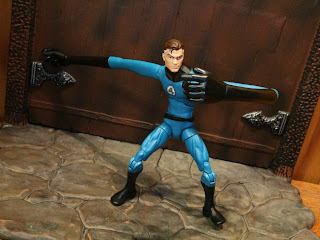 Mr. Fantastic is a really solid and all around nicely done Marvel Legends figure. I wouldn't have bought him just for him but to complete the Fantastic Four? Heck yeah, that's a worthy goal. I don't want to sell him short, however, as Mr. Fantastic is a Great figure. The articulation is solid, the bendable arms are fun, and the inclusion of an accessory definitely adds just a bit more value. Mr. Fantastic released in the early summer but he's still out there at Walgreen's, along with the Thing now too, so if you want him you better get cracking.