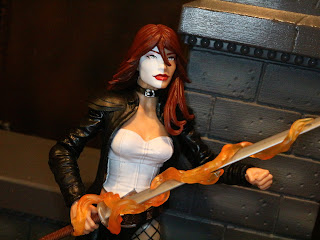 This might be the last Marvel Legends Series review I write for a month or so as I think I've picked up most everything I want from the currently released series (I'm still looking for the Walgreens exclusive Magik, though). Typhoid Mary was released as part of the Monster Venom Build-a-Figure series but was given her own logo on the card front, so I guess you could say that Typhoid Mary is currently the first and only figure in the Typhoid Mary subset. I'll go ahead and admit that I know very little about this character. She's apparently a name reference to the real Typhoid Mary, she has some level of psionic powers, and she has been a foe of Daredevil and Deadpool. Well, that's it. That's about all I know. I'll be honest, I just picked this one up because she was inexpensive, she looks really cool, and I remember from the old X-Men/ Marvel trading cards. Let's check Typhoid Mary out after the break... 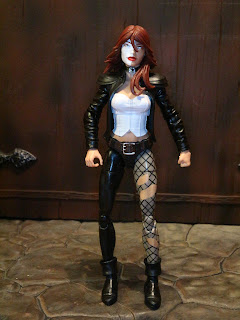 Accessories: Katana, energy effect, and the left leg of the Monster Venom Build-a-figure. 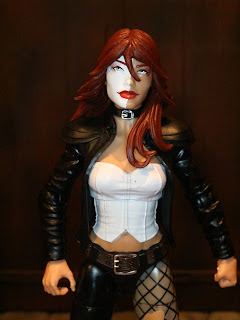 * Typhoid Mary is a pretty cool looking. With many of the Marvel Legends Series figures you can see the reuse from other figures but Typhoid Mary's is less obvious. She's wearing a white corset under a black leather jacket with armored shoulder pads. Maybe she shared the corset with Emma Frost? The paint work is great and little details like the belt buckle and her choker are all neat and clean. 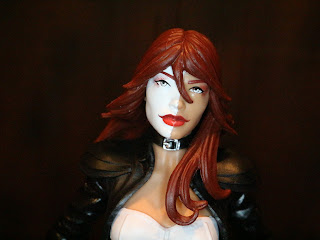 * I love the headsculpt and the paintwork. Mixed together with Mary's red hair it makes for a very stunning and unusual looking figure. Hasbro did another great job with Typhoid Mary, didn't they? 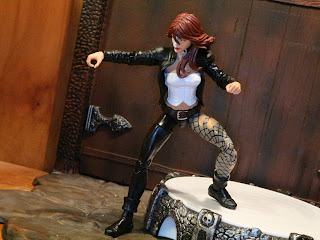 * The articulation is pretty solid, too. It's exactly what you'd expect from this line meaning you're getting lots of movement and great durability. The Marvel Legend Series continues to be one of the most fun lines out there at mass retail today. 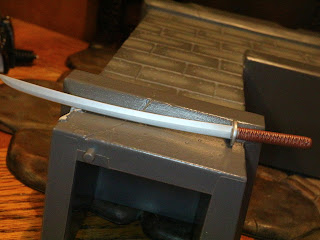 * Typhoid Mary comes with a katana. A lot of Marvel characters come with katanas. That doesn't mean this is a bad accessory. It's still a pretty nicely done katana but it gets better... 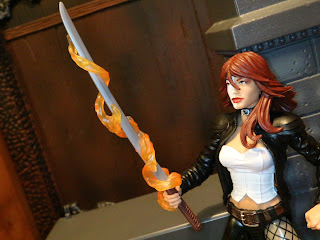 * Perhaps to show off her psionic powers Typhoid Mary comes with an energy effect that fits over the blade. It's molded in translucent orange plastic and looks really cool. I love stuff like this as it makes a figure feel more alive and dynamic on display.

* Remember that if you buy Typhoid Mary new you'll also get the left leg of the Monster Venom Build-a-Figure.


* Hasbro tried to capture the single ripped up fishnet stocking that Typhoid Mary wears on her left leg using just paint. It looks... well, not as impressive as it should have. I guess I applaud the effort but this probably needed to be a new mold or something. As it is, it doesn't look like it fits in with the rest of the figure stylistically. 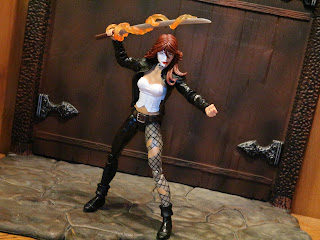 Typhoid Mary may not be as loaded down with cool extras and weapons as many other Marvel Legends Series figures, but you know what? She is still a pretty Great action figure. She looks awesome, has a cool energy effect for her sword, and she's fun to play with. The Marvel Legends Series is just such a fun line and the fact that Hasbro keeps releasing new figures of secondary, tertiary, and even quaternary characters and they just keep being awesome and fun. Typhoid is another cool one that caught my attention and I'm glad to have her.

This is the first action figure of Typhoid Mary I've reviewed on the site. For more reviews from the Marvel Legends Series, check out the following: