The Revenge of 31 Days of Toy Terror: Oogie Boogie #450 from POP! Disney by Funko 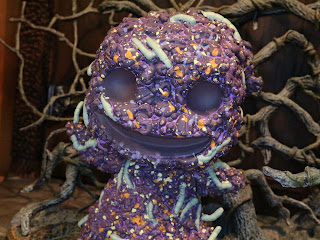 Considering both my love for The Nightmare Before Christmas and the fact that it is the 25th Anniversary celebration of the film, you probably knew that 2018's The Revenge of 31 Days of Toy Terror would be filled with reviews of the residents of Halloween Town, didn't you? Sometime in August Funko released quite a few new POP! vinyls from The Nightmare Before Christmas and one of them that really appealed to me is the Oogie Boogie figure I'm reviewing today. Rather than just being your garden variety boogie man, this version of the big bad boogie daddy reveals his true form: A massive cluster of bugs! While various companies, all the way back to Hasbro's original offerings in 1993, have implemented Oogie Boogie being stuffed with bugs as a feature in the toys, so far as I know Funko is the first to offer this very specific variant of the character. I actually received this guy as a birthday gift way back in September but I just knew he'd have a special place on this year's countdown. Let's check him out after the break... 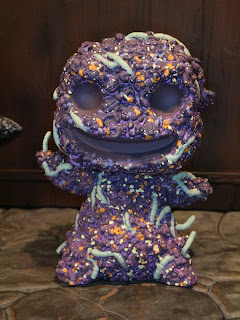 
* While he isn't "movie accurate" I still will give Funko the credit that they tried to do something different with Oogie Boogie and it turned out pretty fun. As a stylized vinyl figure, the bug form definitely isn't overly detailed but it makes for a cool looking toy. Plus, it's loaded with purple, orange, and green, three of the four Halloween primary colors. The pose is pure Oogie Boogie, even if it does really hamper the movement of his head. 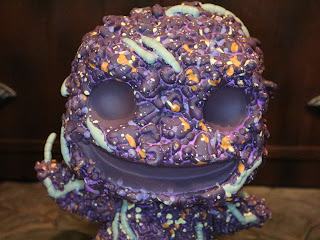 * Funko gave the figure a fairly traditional looking Oogie Boogie mouth and eye shape, so it is absolutely recognizable. It's a cool look for the guy and I really dig it. It's as cute as a massive guy made of bugs can be, you know? 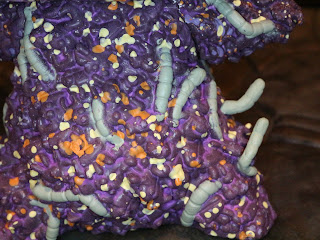 * The figure has a crazy texture all over it due to the rough, bug-covered sculpt and the worms wriggling all over. It definitely doesn't feel like a POP! vinyl in your hands due to the texture. It helps it stand out, though, which is quite cool. 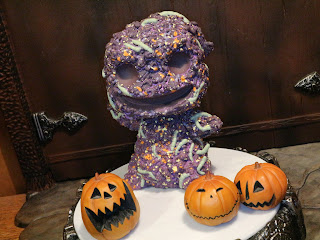 Oogie Boogie #450 isn't the best POP! released in this collection but it definitely is one of the more "off the beaten path" variants. I like that. I do wish the bugs had more definition to them, though, and it would have been really slick if the POP! had come with a mini POP! version of the final bug, but for what we got it's a Good and a 1/2 vinyl figure of one of my favorite Halloween Town residents. He may be a bad guy but long live Oogie Boogie!