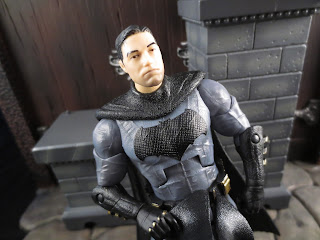 I was very surprised last week to walk into the Toys 'R Us closest to my home and find the new Toys 'R Us exclusive Unmasked Batman from Mattel's DC Comics Multiverse: Batman v. Superman line. If you're trying to find any figures other than the basic Batman and the Armored Batman, you're going to have a tough time thus far. This guy was right there, though, so I picked him up. This is a pretty cool idea for an exclusive as it's actually rather rare to have an unmasked Batman figure in any toyline. I mean, Ben Affleck's portrayal of an over the edge Bruce Wayne was definitely one of the high points of the film, so it's nice to acknowledge him in some way (of course, as you'll see, this figure doesn't exactly look like Affleck). Want to take a closer look at an unmasked figure of the Caped Crusader based on Ben Affleck's portrayal? Then join me after the break... 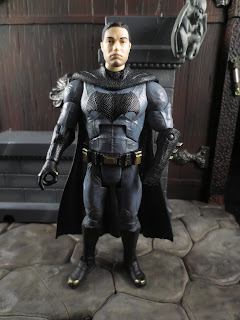 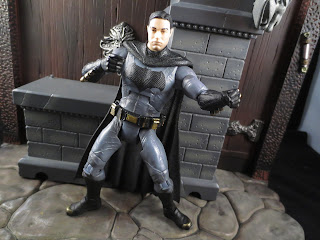 * Mattel has made some very solid, sturdy figures here. While this figure seems to share the body with the basic Batman from this series (which I don't own yet) they did do a number of new sculpts for the line. The upper body articulation isn't at all bad and does have a decent range of movement. It's about on par with an average DC Universe Classics figure but fees more solid. 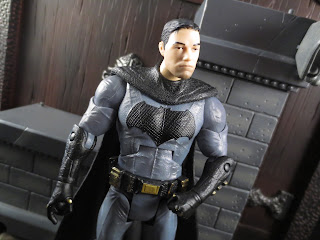 * Let me just say that I'm always down for having an unmasked Batman. We just don't get that many figures showing off Bruce Wayne's face, so I'm down for almost any of them. This is a great concept and at a glance, it works. The head seems appropriately sized and does look good. Unfortunately, it just doesn't look like Affleck, but I'll speak to that problem in a minute. 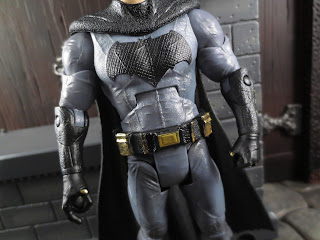 * Check out the texture and paintwork on this costume! I love the Batman v. Superman Batsuit and Mattel did a heck of a job capturing it here. The texture of the suit's weave is just incredible. Really, really strong stuff. Also, who doesn't love that enormous Frank Miller inspired bat on the chest? 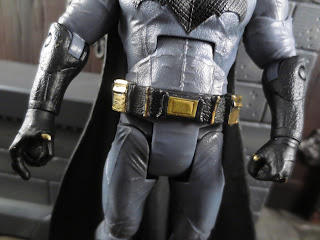 * Here's a closer look at the utility belt. I dig the gold highlights on the figure. They're on the gauntlets, wrist spikes, boots, and of course on the utility belt as well. They add another layer of visual goodness onto the already strong sculpt and paint work. 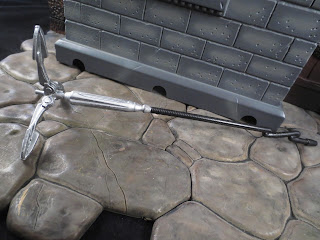 * One of the coolest things about this bonus figure is that it comes with a unique piece for the series Build-a-Figure, which is actually Batman's Grapnel Blaster. While Aquaman comes with the standard grapnel darts, this figure comes with  a dart on a length of cord that looks like it's in the process of being launched. It's not a necessary piece for building the Grapnel Blaster but if you pick it up you'll get something much cooler than a duplicate piece. I'm sure someone with just this piece could use it as a cool accessory, too. It's pretty neat with some nice weathering on the dart itself. 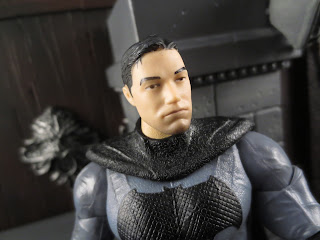 * Umm.. Ben Affleck? Is that you? Because it sure doesn't look like you, that's for sure. This Bruce Wayne actually kind of looks Asian. You know how Marvel Studios created a special edition of Iron Man III for China by inserting some unique scenes starring Chinese actors into the film? Perhaps Zack Snyder created an alternate cut of Batman V. Superman: Dawn of Justice which featured an Asian actor. Perhaps this is a special figure from that film? It's a good sculpt, it just resemble Affleck. 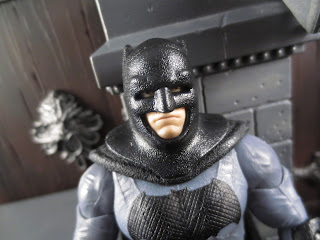 * Umm... What? This cowl is terrible! I know that removable pieces like this always look a bit funny on a smaller figure but why not go with an alternate head or something made from a thinner material? This just looks really, really silly. I'm not even sure what to call it. It looks way to thick for a Halloween mask. Maybe if the ears were larger it might look a bit better. As it stands, though? This is goofy. I mean, this is really goofy. This is putting Metropolis and Gotham across the river from each other goofy. 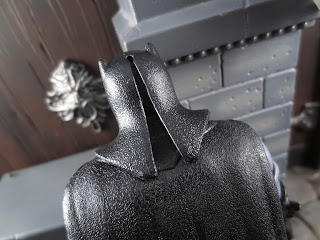 * Here's the back of the cowl and yikes, does it look bad. It's made from a weird, thick material and it has this giant split in the back. Again, he should have just come with an alternate head or, to be honest, a decently sculpted head and a ripped cowl accessory. Kenner made better Batman figures with removable cowls than this. It just looks very, very "toyish" and not at all in a good way. 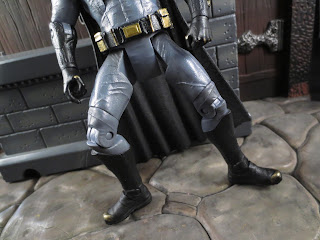 * I mentioned the articulation and durability of the figure as a positive above but I do want to mention that the lower body's articulation is kind of weak in terms of the range of movement. It just feels really stiff, particularly without some sort of ball jointed or even rocker ankles. Batman needs a bit more articulation if you ask me. 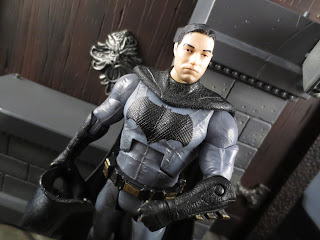 Overall, this figure is a really mixed bag. The body, concept, and extra piece for the Grapnel Blaster are all incredible. The lower body articulation, the goofy cowl, and the headsculpt just don't impress, though. There really are some tremendous highs and some baffling lows here (kind of like the film), so at the end of the day it turns out to be a pretty average figure. I'd give this one a solid Good. I don't have the basic Batman from this line yet (I'm waiting on him to drop in price since he is everywhere) but I'm thinking he might be the way to go if you need a BvS Batman. Only if you want the extra Grapnel Blaster piece or really want an unmasked Bruce should you attempt this one. It's a cool concept but lacking in its execution .

Other than the basic Batman and Armored Batman, these figures have been fairly tough to find. I've only reviewed two others so far:

Young Justice: Invasion by Mattel
Batman
Posted by Barbecue17 at 5/05/2016