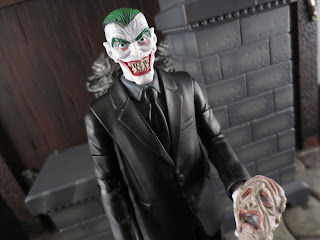 So, yesterday I mentioned how I stumbled upon the DC Comics Multiverse Armored Batman? Well, after my stop at a Toys 'R Us where I found that figure I ended up at a nearby Target where I found this figure. The Joker here is part of the basic DC Comics Multiverse series (not the Batman v. Superman series) and it features characters from recent comic stories as well as from TV shows like Arrow and The Flash. It's a cool concept to have a wide variety of characters on shelves (similar to how Hasbro handles some of the movie waves of Marvel Legends) and I was quite pleased to see this version of Joker from Batman: Endgame. I haven't read Endgame yet (so please don't spoil it for me) but for Christmas I just got Batman vol 6. and vol 7, The Joker: Endgame, and all three trades of Batman Eternal. I only read trades these days so I'm always a little behind. That being said, this Joker figure looked so creepy that I had to snap him up. He's part of the series of 6 other figures which all include Collect & Connect piece so you can build Batman's Justice Buster. Ready for a closer look at the Joker? Then join me after the break... 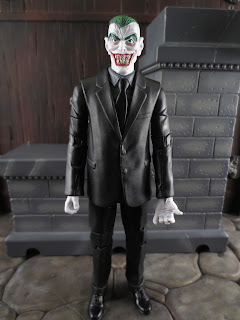 Accessories: The Joker's face and the left arm of the Batman Justice Buster. 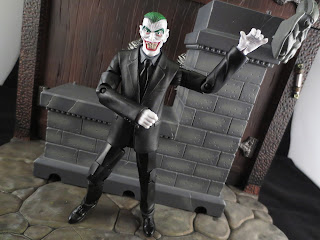 * I know collectors love to give Mattel a hard time but they really do make some nice, sturdy figures. Honestly, I've never had a DCUC, MOTUC, or WWE figure break on me and I own hundreds of those. The articulation is much nicer than most other figures of "guys in suits" you'll find and definitely gets the job done. Figures like this are nice because unlike most things from NECA and DC Collectibles, I can hand them to my two-year old (under my supervision of course) without fear of her breaking something. 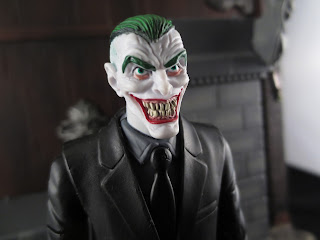 *Want to know what sold me on this figure? It's that headsculpt! It's not entirely clear who is working on these figures (the Four Horsemen are involved, but not on everything) but that Joker headsculpt is perfect. It's a great interpretation of the cover of Batman volume 7 and it has so much personality. The wild eyes, the odd, slicked back hair, and the nasty, uneven teeth. This is without a doubt one of the best Joker headsculpts I've ever seen. 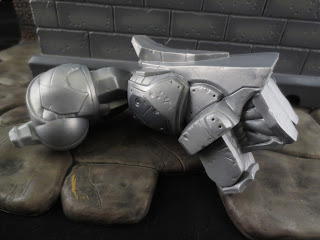 * With the swap back to 6 inch figures, Mattel is also jumping back in and offering Collect & Connect figures. This series of 6 figures comes with the pieces to assemble Batman's Justice Buster. This looks like a cool figure. Joker comes with the left arm, which features a swivel/hinge elbow and a swivel/hinged shoulder. The arm is a little over 5 inches, so this thing should be nicely sized. 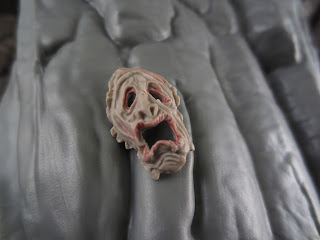 * Say what you want about the New 52 but the early months of that era of DC started off with a bang due to the whole storyline of the Joker cutting off his face and disappearing. The Joker's severed face managed to become an intriguing plot point and, while I don't know it's role in Endgame yet, it looks awesome here. It's kind of rubbery and really eerie. This is a nice sculpt and definitely something that Batman and Joker fans will probably want on their shelves. I'd love to find a nice display stand for it to replicate how it looked when it was held by the GCPD. 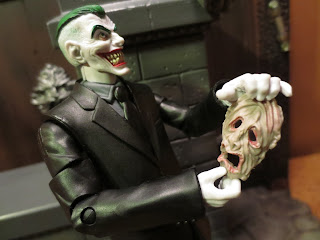 * One thing I noticed when taking the figure out of the package was that the Joker's left hand is oddly shaped. It turns out that it's sculpted to capture this pose from Batman: Endgame. The Joker really does look awesome holding his face like this. I have a pile of four Star Wars books to finish plus some MOTU graphic novels and the Batman TPBs that lead up to Endgame, but I'm getting really eager to see where this story goes! 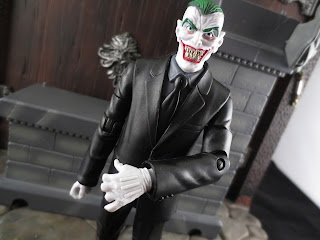 * Hey, remember that suited body that Mattel used over and over again a few years ago? Well, it's back. It's not a bad suited body by any means but it's not a perfect match for the Joker. The tie looks a bit off and everything needs to be a bit messier. 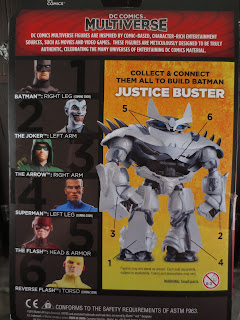 * Here's a peek at the back of the package and the assembled Justice Buster. As you can see there's a nice diverse range of characters available on shelves. That's not problematic in and of itself, but it kind of is when it comes to building the Collect & Connect figure. If these were all comic characters in a more uniform style, like DC Universe Classics, it'd be easier to jump in. Considering that there are figures from Arrow and The Flash in here, two shows that my wife loves but that I just haven't watched much of, I find I have little to no interest in completing this set. It's probably just the Joker for me. And maybe the Batman figure, because I only own a couple hundred Batman figures and I can always use another one. Oh, just ignore my whining. I just want that Batman Justice Buster but don't necessarily want to buy Superman, the Flash, or Green Arrow to own it. 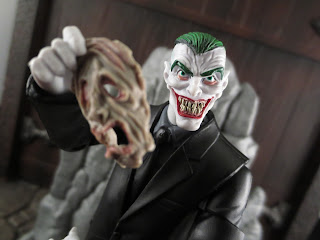 This is an insanely nice figure that really surprised me. I was not expecting to see him on store shelves (I actually forgot he was coming out) but he really shocked me in a great way. While we've seen his body many times before, this is still an excellent Joker figure that, due to the dark suit, manages to look different from nearly every other Joker figure in my collection. I like the idea of Mattel doing some very story specific figures and if the Joker here is any indication of what they've got coming up, I'll be picking up a few more down the road. It's interesting that while DC Collectibles is focusing more on the classic character interpretations in their Icons line and the Batman the Animated Series line, Mattel is releasing the more recent stuff now. This is a Great Joker figure and is well worth tracking down. I guarantee he's going to be the toughest to get in this series. Considering he shares the series with Flash and Green Arrow, that's saying something. 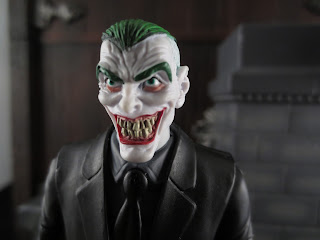 While Mattel is now reentering the 6 inch scale with these new Multiverse figures, the line has been around since 2013 in the 1/18th scale. I've only reviewed a couple of figures from that smaller scaled line:


I've reviewed a few other Joker figures on this site, including:

The Dark Knight Miracle Action Figure Ex/ MAFEX by Medicom
The Joker No.005