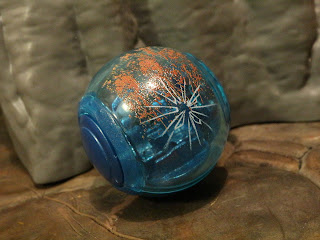 Just a few days ago I reviewed the first of the five "Battle Damage" vehicles from the Jurassic World Matchbox line and today I'm checking out the second: The Gyrosphere from Jurassic World. Exclusive to Walmart, the Battle Damage vehicle series includes the same five vehicles that were originally released in the Island Transport Team back in late spring only now with some new paint applications to give them a more weathered look. The Gyrosphere played a pretty substantial role in Jurassic World and was destroyed by the Indominus Rex. This version of the Gyrosphere seems to show off the mud and damage it sustained during that attack, although in the film the Gyrosphere eventually is completely destroyed. Let's check out this new Matchbox offering after the break... 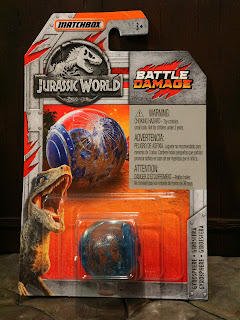 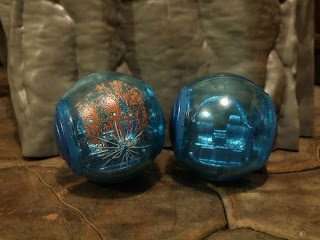 * On the left is the Battle Damage Gyrosphere while the original model is on the right. Other than the battle damage painted onto the translucent frame, there really is no other difference between these two models. 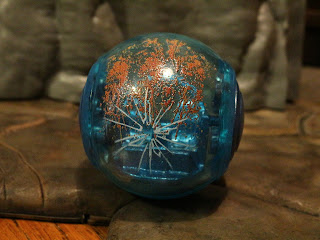 * The Gyrosphere is definitely a memorable vehicle from the Jurassic Park series but the Matchbox vehicle itself, while a fairly faithful recreation isn't the most exciting. The paint apps really improve this one, though, as there is mud and a crack on one side and some more spattered mud on the opposite side. It's a cool look and with the correctly sized Indominus Rex toy would make for a cool display piece. 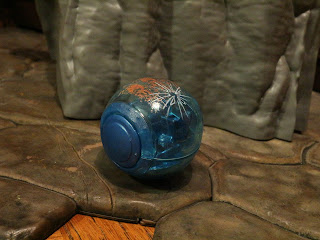 The Gyrosphere isn't my favorite Matchbox offering but I think the effects on this one actually improve things just a bit. This is a Good vehicle and while it may seem small for $1, it does have the cool feature that allows the interior seats to sit upright. If you're picking these up remember that the Battle Damage Island Transport Set is available as well, so you can get all five vehicles at one time. Of course, that was actually more expensive than picking them up individually. Weird, huh?

If you're interested in the Gyrosphere, remember I reviewed the standard Gyrosphere as part of the Island Transport Team set.

For more Jurassic World Matchbox vehicles, check out the following: