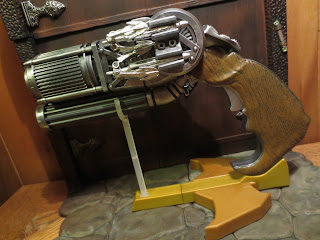 Today I'm looking at something pretty unique: Batman's Grapnel Blaster from Mattel's DC Comics Multiverse: Batman v. Superman line. Rather than being sold by itself, this prop replica was actually a Collect & Connect item for the series. Rather than each figure coming with the limbs and body parts of a build-a-figure, each figure came with a part of the Grapnel Blaster. Batman's Grapnel Blaster, or the Grapple Gun, probably seems like it's always been part of Batman's arsenal but it was actually an element of the character created for the 1989 Tim Burton film. Ben Affleck makes use of this tool in Batman v. Superman: Dawn of Justice in a way that makes seems to me inspired by the Arkham-verse video games. Prop replicas can be expensive pieces to obtain and now, interestingly give you the option of building one alongside of your action figure collecting. Ready for a closer look at this interesting Collect & Connect piece? Then join me after the break... 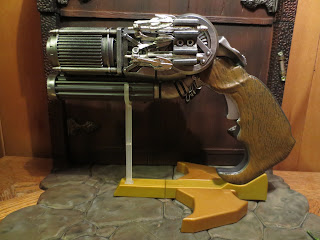 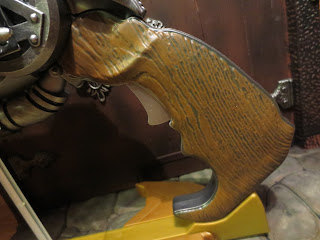 * The handle actually looks like it's made of wood. The wood grain texture on this is quite nice and even has some drybrushing to make it look more realistic. This is the largest piece of the gun (it came with Superman) and it includes a non-functioning trigger as well as the middle section of the base. 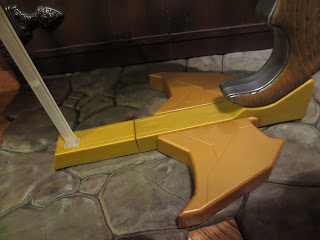 * Here's the multi-piece stand that was included with Batman and Wonder Woman. I like the look of this as it's very cool that there is a way to put the gun on display. I kind of question why Mattel made the display stand two separate colors, though. I can understand the clear arm holding up the front half of the Grapnel Blaster but why make the base two distinct shades of gold? 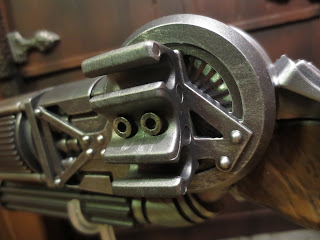 * On the side of the gun is a small clip to hold two of the grapnel darts. This piece is the smallest piece to be included with a figure and was included with Armored Batman. 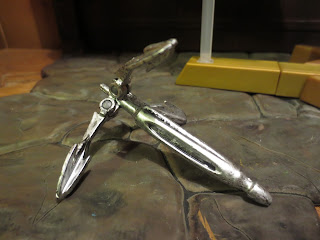 * Here's a closer look at one of the darts. Aquaman came with two darts and they can actually fold up for storage. They receive a nice dry-brushing to give them a metallic look. Sometimes then can come out of the package a bit bent up but mine have reverted back to their normal, healthy state over the couple of months. 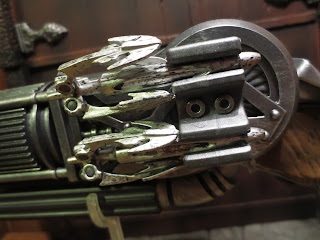 * And here are the two darts stashed in the holder. They do look pretty wicked stowed on the side like this. 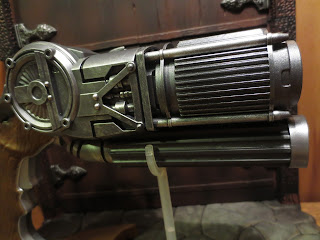 * Here's the side of the gun which is made up of three pieces from the Bat Creature, Knightmare Batman, and Lex Luthor. I really think Mattel did a fine job with this as, looking at it, I don't think you'd guess at first that the whole thing is made of plastic. The detail and dry-brushing effects are super effective at convincing your mind this thing is made of wood and metal. 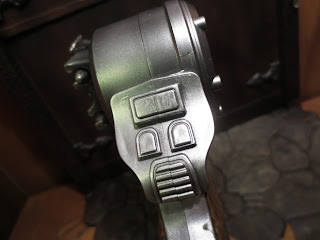 * There are even a few non-functioning buttons at the top of the handle. I guess these are the buttons Batman uses to activate the gun's features. 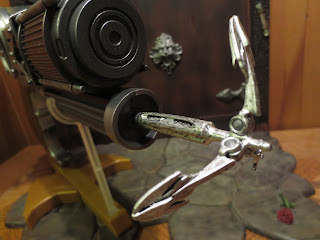 * The darts can plug into the tip of the lower barrel for display. They fit in their quite securely and give you another way to display the Grapnel Blaster. 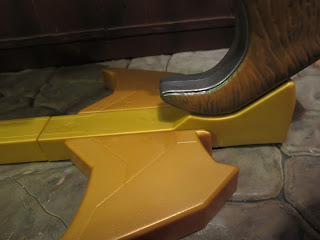 * I'm sure Mattel did this for some sort of safety purposes but it's worth nothing that the handle of the gun is permanently attached to a piece of the base. This is a fairly realistic looking weapon (in terms of color choices, anyways) so maybe this was done to somehow bypass a policy or mandate regarding toy weapons. 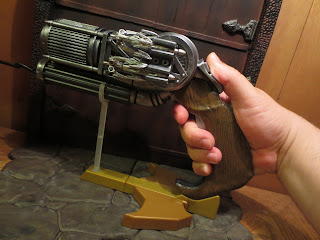 * Here's an image of me holding the Grapnel Blaster. As you can see, the gun doesn't seem to be too undersized at all. With a little work I'm sure a determined cosplayer could augment this into a costume prop nicely. 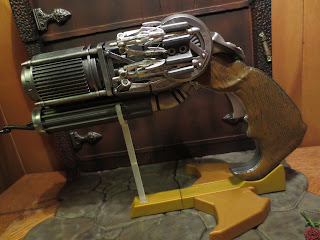 I can't think of another company that has done a build-a-figure that turned out to be a prop replica so Mattel seems to be rather innovative here. I'm sure many collectors are wondering why Mattel didn't make Doomsday the Collect & Connect piece but I have to say that I'm glad they went with this. It's truly a cool low-end prop replica and, if you've already been collecting this line, I think you'll be pretty pleased with how it turns out. It's way better than I expected it to be. Considering that this is an extra you get for buying the other 8 figures, I think it's really a Great and a 1/2 item. I'm pumped about having this on display on one of my comic book shelves. If you're looking for one they're starting to turn up on E-bay for anywhere from $75 to $200 plus dollars. Considering that you can complete this line for around $160, don't get gouged. Most of these figures, other than Wonder-Woman and Aquaman, don't seem all that difficult to find with a little diligence.


I've reviewed all of the other figures necessary to build this including Wonder Woman yesterday and these guys in the past:
Aquaman
Armored Batman
Bat Creature
Batman
Batman Unmasked
Knightmare Batman
Lex Luthor
Superman

I've only reviewed two other Build-a-figure items on here: