The Revenge of 31 Days of Toy Terror: Clown #452 from POP! Disney by Funko 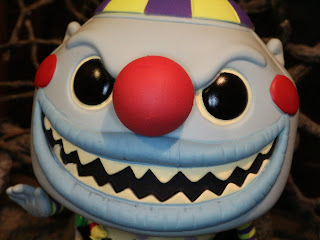 I love The Nightmare Before Christmas and there are certain characters that I just cannot pass up when I see collectibles and toys based on them! You probably know my love for Jack as the Pumpkin King but I'm also nuts about Oogie Boogie, Zero, and the toy duck with bullet holes. The character I just cannot pass up, though, is the Clown with the Tearaway Face. Usually he is just referred to as Clown (which is fine if a little generic) and I'm always on the hunt for him! As soon as I knew Funko was making a Clown with the Tearaway Face POP! I kept my eyes open and, lo and behold, I found one in late August at my local GameStop. I've been sitting on this guy for over a month now because I really, really wanted to save him for the Revenge of 31 Days of Toy Terror. Let's check him out after the break for some spooky October fun! 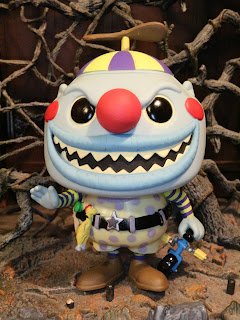 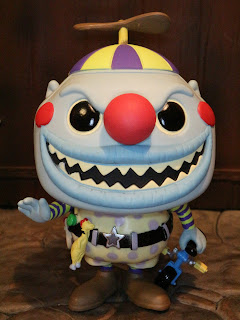 
* The Clown is a very nice, very intricately detailed POP! vinyl. He's bright, colorful, and will absolutely stand out from most other POP! figures with the exception of other brightly colored clowns. While he's not depicted as riding his unicycle, he's still carrying it so it isn't completely absent. I really like this guy and I'm pleased with how well Funko translated him into the POP! aesthetic. 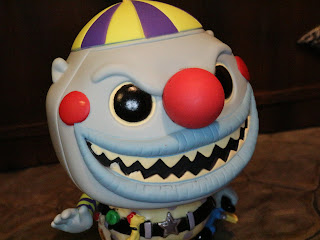 * The headsculpt is good. It's excellent and covered with details such as the large, bulbous nose, the rosy red cheeks, and the sharp jagged teeth. They're actually raised elements, not just painted on. Also, there is an indented line around the Clown's face where he presumably would tear it off and then disappear without a trace. The face isn't removable (that would have been amazing) but the fact that the line is there is a cool detail. 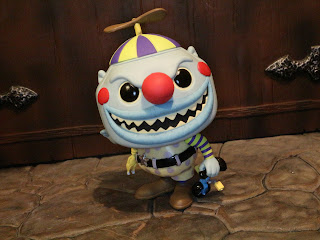 * Funko POP! vinyls are simply articulated with just a swivel head but they usually feel pretty durable and can at least have a little extra expression added to the display thanks to the joint. 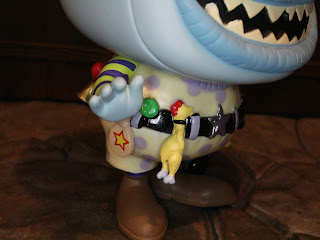 * The Clown's belt is loaded with all kinds of goofy gag items including his air horn, yo-yo, rubber chicken, and ball and paddle. The paint applications are pretty clean here and the little sculpts look great. Imagine all of the mischief our favorite clown could get up to with this crazy stuff? 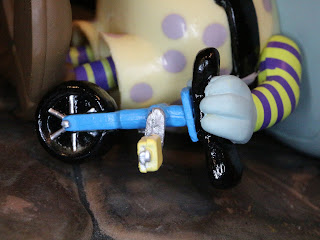 * Here is the unicycle I mentioned earlier. I love that Funko included it even though they didn't work it into the pose (the ReAction figure did!). It looks great and, like the gags on his belt, feature some great painted and sculpted detail. 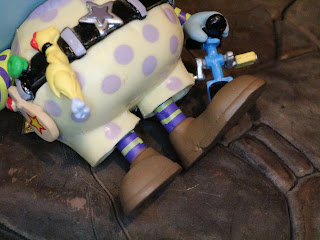 * When I first took my Clown out of his package his left leg was very, very bent. He couldn't even stand up! After gently flexing the leg back into place a few times a day over the period of a week or two it now seems to work nearly perfectly (it's still just a little bent but it doesn't impact his ability the stand up). 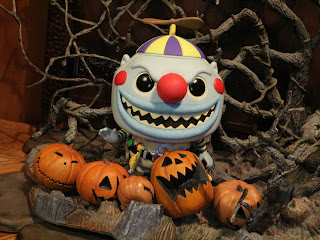 I'm always excited to add another Clown to my Nightmare Before Christmas collection so this Funko POP! version will stand alongside his plastic brethren just fine. This year is the 25th anniversary of The Nightmare Before Christmas so there seems to be even more product out than usual. You might get overwhelmed but, if you're not sure to pick up, this one is a Great choice. I do wish he had the removable face and hadn't had the problem with his leg, but otherwise he's a great POP! He seems to be popping up at quite a few places so search him out before he disappears!

For more POP! Disney figures, check out the following:
Elsa, Marshmallow, & Olaf 3-pack from Frozen
Pumpkin King #153 from The Nightmare Before Christmas
Posted by Barbecue17 at 10/07/2018