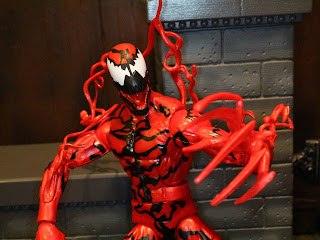 It's time for another Marvel Legends Series review and this time it's the early 90s Marvel mass murderer Carnage! During the early 90s Venom was a huge deal. Even as someone who never really read Marvel comics, I knew who Venom was and totally thought he was cooler than Spider-Man at the time. I had some Venom action figures and even owned a Venom tank top, probably the only tank top I've ever owned in my life (I was probably 9 or 10, so that kind of makes it less lame, right?). Of course, this was the 90s so after Venom's huge surge of popularity Marvel had to top him and go more extreme, thus along came Carnage! Again, my memories of Carnage come from his appearance on the Spider-Man cartoon, the Maximum Carnage SNES game, and the Toy Biz action figures. While I love the MCU, most of my Marvel Legends Series action figure buying is either based on just how good the action figures themselves are or fueled by nostalgia for the toys of my youth. Carnage is another figure I picked up for a fraction of the retail price due to him not coming with his Build-a-Figure piece for Monster Venom, whom you can build if you pick up all of the figures from the new Venom themed series of figures. Let's check out Carnage, shall we? 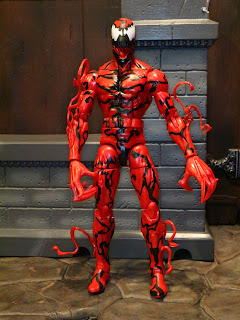 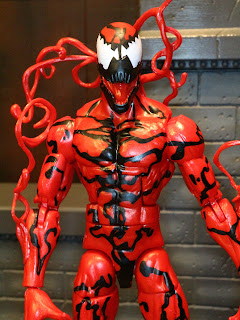 
* Many Marvel Legends figures reuse standard bodies and Carnage is no different. What does set him apart, however, is the crazy red and black color scheme. It looks really good and definitely makes him appear to be incredible unique. Carnage uses one of the thinnest but very muscular bodies in order to capture his sinewy, symbiote infused appearance. he also has lots of tendrils flailing about his body, both in the wrists and on his shins, but I'll talk more about those in a minute. 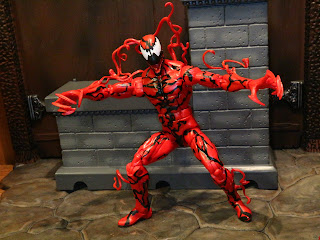 * As almost always seems to be the case with Marvel Legends, Carnage is a well articulated action figure. With multiple hands and a very creepy, flowing appearance, Carnage is incredibly fun to pose and play with. 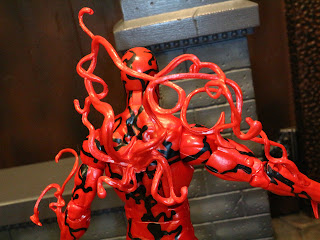 * Not only does Carnage have the flowing tendrils on his limbs but he also has a mass of them emitting from his back as well. The back tendrils are actually a single separate piece that fits into a small hole on the figure's back. I like the look of these and how "busy" they make the figure feel. They definitely add a sense of chaos to the appearance. 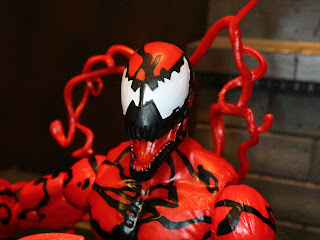 * Carnage's headsculpt is pretty impressive. I love the clean paintwork on the overly large white eyes and the open mouth with lots of small, sharp teeth. 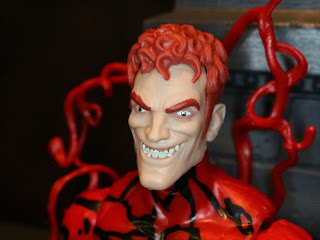 * Carnage includes two headsculpts that swap out easily. The second headsculpt is the unmasked head of serial killer Cletus Kasady. The headsculpt is really creepy and fits the monstrous and moralless personality of the character who, interestingly, was based on the Joker. Can't you even see it in the headsculpt, particularly the shape of the head? 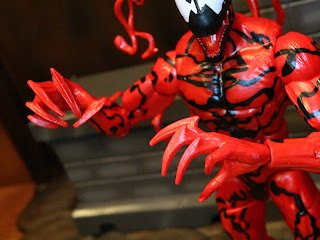 * Carnage can't just have regular hands. Instead, he has these pretty creep clawed hands! Yikes! Get a manicure, Carnage! 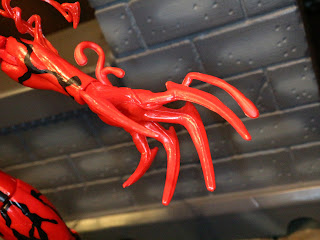 * Carnage's hands can swap out with some additional hands that show him with more weapon-like fingers. His left hand can be swapped out with this alternate left hand that shows even longer, more knife like fingers. It reminds me of Freddy Krueger's glove due to the shape of the fingers! 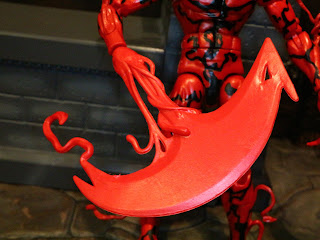 * Carnage's right hand is my favorite, though. It morphs into a giant blade like weapon. This thing is pretty wicked, right? It's like a giant bladed pendulum!

* Remember that if you buy this figure at retail (or new in the package) you'll also get the head for the Build-a-Figure of Monster Venom. I saved over $10 dollars by buying loose without that piece so, if you're not planning to build the figure, shop around. 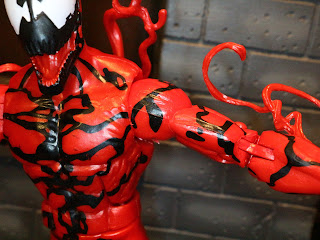 * The only complaint I have here is that Carnage's shoulders are really, really tight. That's the only point of articulation that just doesn't function. They use the grooved teeth Hasbro used to use to try to improve the durability of the articulation but they seem overly tight here. 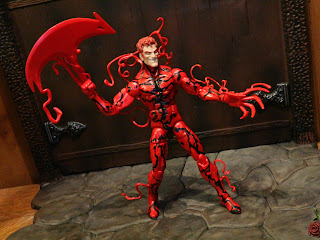 Carnage is a pretty impressive figure. From the color scheme to the alternate hands to the mass of tendrils to the alternate Cletus Kasady portrait, there is a lot here. Hasbro released this figure in 2014 as part of the Marvel Legends Infinite Series but now you'e getting it with all of the extras. I guess if you bought it back then you might be a big miffed but for now, this is a pretty Epic figure that has been greatly improved on. I wasn't necessarily looking forward to a new Carnage figure but, one I saw this one, I knew I had to have it. He didn't disappoint!


This is the first action figure of Carnage I've reviewed on the site! For more Marvel Legends Series figures, check out the following: