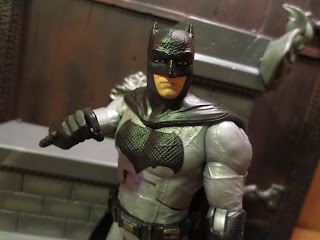 I first saw this figure on January 1st, 2016 when Toys R Us put these out on shelves. I originally wasn't sure I was going to pick up the entire set so I just grabbed the Armored Batman figure. Fortunately, Batman has been insanely easy to find and I waited until I could get him at a discount. Just recently did I manage to get him from a seller on Amazon who only wanted $12 bucks for him (with free Prime shipping), so now I have a new Batman figure to review. I've already reviewed the Toys 'R Us exclusive unmasked Batman figure which reuses most of this figure, although it does have a different cape and a unique head along with a different paint job. Honestly, that's quite a few differences and it totally justifies me snapping up another Batman figure! Ready for a look at Batfleck? Then join me after the break... 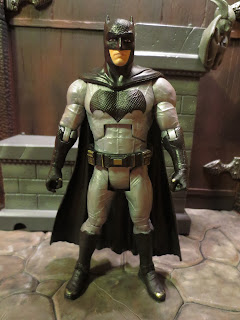 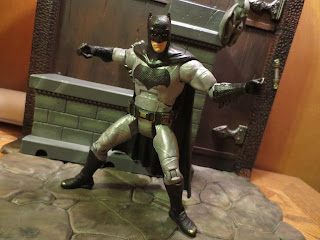 * Mattel has made some very solid, sturdy figures in this line, which is great as you know kids will be picking these up too. While this figure does share the body with the Unmasked Batman Mattel did do an impressive number of new sculpts for the line. The upper body articulation isn't at all bad and does have a decent range of movement. It's about on par with an average DC Universe Classics figure but feels more solid. 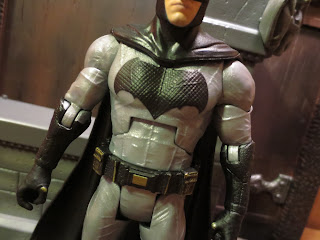 * Check out the texture and paintwork on this costume! I love the Batman v. Superman Batsuit and Mattel did a heck of a job capturing it here. The texture of the suit's weave is just incredible. Really, really strong stuff. Also, who doesn't love that enormous Frank Miller inspired bat on the chest? Interestingly, the color is a bit lighter than on the Unmasked Batman figure, which is nice. Both look good, though. Also, the cape is completely different. It's textureless and smooth. Looking at still of the movie cape, I think you could go either way, so Mattel has nicely given us a couple of options in this line. 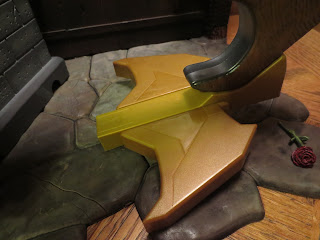 * Again, I'm just a sucker for the Build-a-Figure/ Collect & Connect concept, especially when it's Batman related. The Grapnel Blaster is definitely kind of out of left field as I'm having a tough time remembering another toyline giving us a build-a-prop replica (I'm sure I'm forgetting something, though) but it has turned out pretty well (I'll review it in full when I pick up Wonder Woman). Bats comes with the main base for the display piece which attached to the handle that comes with Superman. 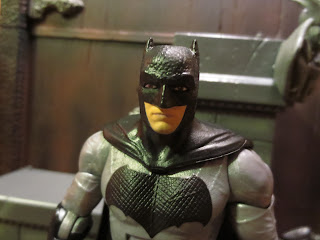 * I'm just not sold on this headsculpt. Let's shoot straight for a minute: Ben Affleck looked awesome in the batsuit. It totally worked for him and it helped to elevate his performance. This, though, doesn't look much like Affleck. Heck, it doesn't quite look like Batman to me. It looks like someone wearing a Batman Halloween costume. Like maybe an orthodontist. This is what an orthodontist looks like when he wears a Batman costume to his office on Halloween. 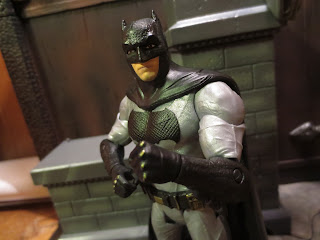 * I'm quite disappointed that Batman doesn't come with any accessories. He used so much cool stuff in the film; couldn't Mattel have at least given him the grapnel blaster or a batarang? This is a big negative in my book: Batman always needs to come with some cool gadget. Always. 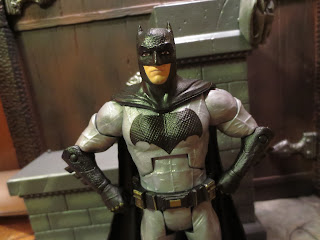 The basic Batman isn't a bad figure at all. While it's baffling that he doesn't come with any accessories, he's still a solid figure that I'm sure a number of folks will want to add to their collections since he's now a pretty big piece of Batman history. My advice to you with this figure is to shop around. Stores are filled with this guy (seriously, any other character is nigh impossible to find!) so you should find some great sales with e-tailers wanting to move stock. Pay less for him and you'll be happier with this Good and a 1/2 version of Batman!

Batman is my favorite superhero (Batgirl is closely behind) so you can probably guess that I have reviewed tons of Batman related figures. You would be right! If you're interested in more figures from the DC Comics Multiverse line by Mattel, check out my reviews of:

If you're just looking for the Caped Crusader himself, check out these fine reviews:

Young Justice: Invasion by Mattel
Batman
Posted by Barbecue17 at 5/25/2016