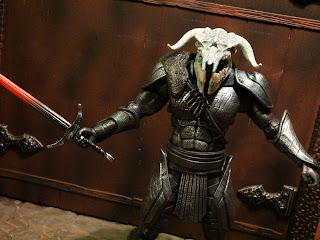 The Wonder Woman inspired Multiverse line has been kind of a mixed bag (great sculpts, poor articulation), but one of the cool aspects of this figure is the inclusion of a build-a-figure that can be built by only picking up four figures. Ares, allegedly the primary villain of the Wonder Woman film, is the Collect & Connect figure for this series and he seems like a pretty beastly dude. I'm really excited to see Ares make his onscreen debut in the film. Heck, I'm really excited to see that a DC villain in one of the DC movie based lines. While Man of Steel did include Zod and his crew, the BvS Multiverse line was missing Doomsday while the Suicide Squad Multiverse line included neither Enchantress or Incubus, so it's pretty nice that Ares is already in the line. Let's take a closer look at this buildable baddie after the break... 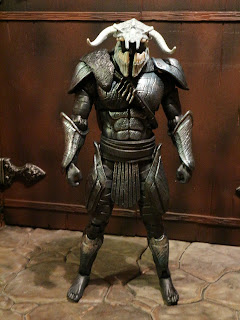 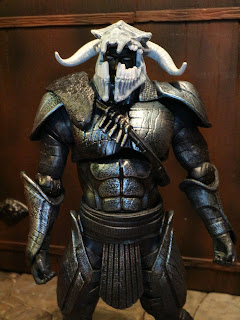 
* Ares has a very cool look. Ares has had a number of different looks over the years, but this version definitely looks to be modeled after the George Perez rendition of the character. He's wearing some pretty heavy armor that looks to be very form fitting; he almost looks like a statue come to life. Most of the armored bits are actually separately molded pieces permanently attached to the body, so there's a lot of depth to the figure. 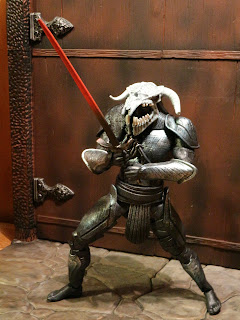 * Ares' articulation is pretty decent. It's much better than the standard figures in the line, particularly with extra points like the balljointed mid-torso. He feels nice and sturdy, too, and you can definitely get him in a few cool poses. 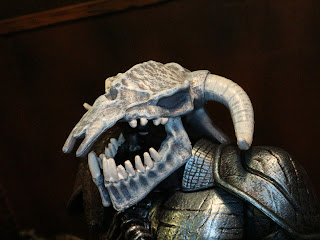 * My favorite part about this figure is the helmet. Yeah, while it initially looks like Ares might have a giant skeletal head, it's really a helmet. The bone texture is quite intricate and has a nice paint effect to help it look aged. 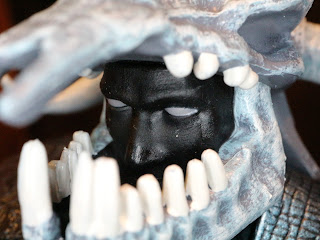 * Inside the helmet is a very plan, solid black face with white eyes. Kind of interesting. Considering that Ares is god of war; it's almost like this face has the appearance of being more of a personification of the concept of war than of an actual person. Ares is being played by David Thewlis (Remus Lupin from Harry Potter, Knox Harrington from The Big Lebowski) so who knows if this is actually what he'll look like or if he's more voicing and doing motion capture for the character. Still, I like the unsettling look of this face. 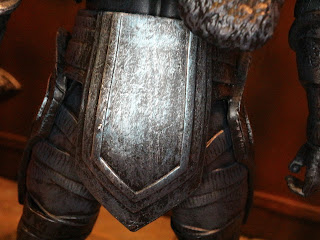 * Ares armor has a great metallic look to it covered with wear and tear. It's very impressive and gives the figure a battle hardened appearance. The flat, unadorned and weathered plates stand in stark contrast to the more detailed and colorful armor of the Amazons. When looking at Ares, you know right away who the bad guy is. 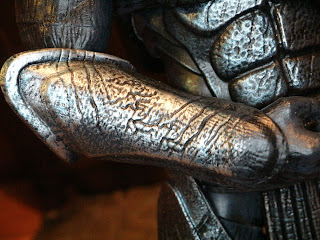 * There is a lot of sculpted detail etched into the armor. Check out these braces and the close-up of Ares' abdominal armor. Nice paintwork, here. 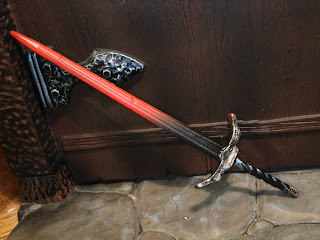 * While the two upcoming exclusive figures, Wonder Woman and Menalippe, both include accessories for Ares, with the basic four figures you only get the sword. The sword is pretty cool, though: It's a wicked looking long sword with a glowing red blade. I'm assuming it's glowing red with an unearthly magic or from extreme heat. It's cool, though, and offers some contrast to the other cooler colors on the figure. 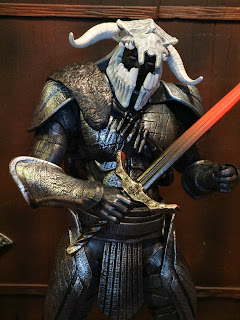 Ares is rather impressive looking figure and is certainly better than the last film based Multiverse Collect & Connect figure, Killer Croc. Ares has solid articulation, great paintwork, and an impressive sculpt. There haven't been too many Ares figures produced, either, so he's not a character that's been done over and over, either. He's not as well articulated as I wish he were (Mattel can do better articulation, as they're doing it in their WWE Elite series and on some comic based figures), but you'll still be able to have some fun with him. It's great to have him on the shelf as a DCEU bad guy, something that's a bit lacking. He's a Great multiverse figure and, if you like what you see and enjoy a few figures in the series, probably worth picking up the set of four figures for. When the other figures get released that include extra pieces, I'll probably show those accessories with Ares and maybe even add an addendum to this review!

I haven't reviewed any other action figures of Ares but I have reviewed plenty of other DC Comics Multiverse figures, including: