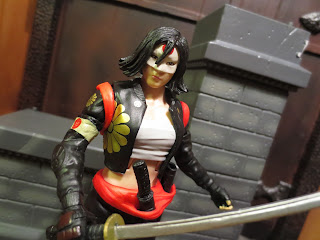 Today I'm finally able to review the last standard figure from Mattel's Suicide Squad subset of their DC Comics Multiverse line: Katana. While she didn't have a huge part in the film, I really liked Karen Fukuhara's portrayal of Katana and I'm hoping she gets more screen time in the Suicide Squad sequel or even the upcoming films project that Margot Robbie's producing which focuses on Harley Quinn and a number of other DC female heroes. Katana is part of the second set of releases in this series (along with The Joker and Boomerang) and as of yet I haven't seen her in any stores; I picked mine up from Amazon. Ready for a closer look at one of the brave souls who tries to keep the Suicide Squad in line? Then join me after the break... 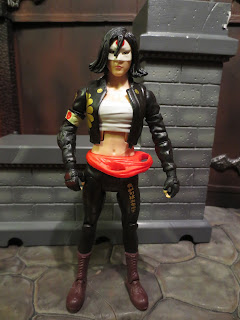 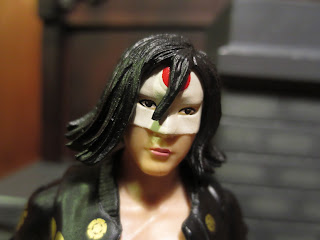 * Like most of the other DC Comics Multiverse figures, while this might not be a perfect representation of Karen Fukuhara in the role of Katana, it is a pretty solid Katana headsculpt. The hair looks really good and the eyes are neat and clean peering out through the mask. 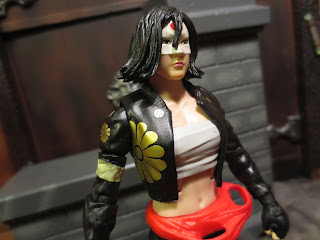 * I really like the detail on Katana's costume as she's a pretty elaborate figure in terms of paint and sculpted detail. There are actually some scars sculpted onto her stomach and chest and the chest of her jacket is a separate piece that rests over her main torso, giving her a more layered look. The black, red, and gold color scheme looks really impressive and the paintwork is neat and clean all around. 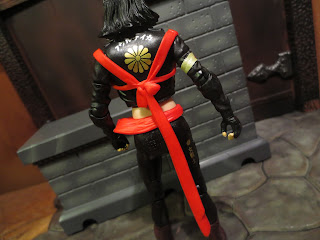 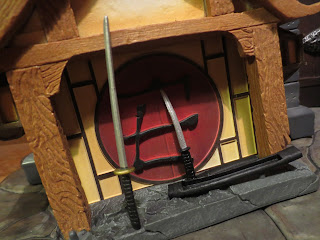 * Katana comes with two swords: Her Soultaker katana and a wakizashi. They're pretty decent accessories and fit inside the two included scabbards. 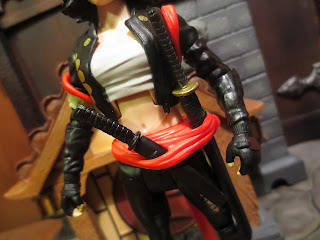 * Katana's swords fit in the scabbards and can tuck into the belt around her waist. I like that they're removable and that she can store all of her accessories on her person. 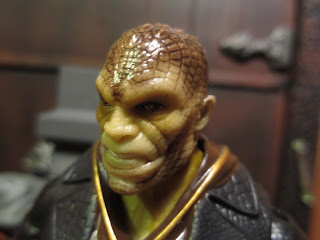 * I'll never complain when a figure comes with build-a-figure pieces, particularly when they're for a Batman villain! Katana comes with Croc's head and crotch; two of the pieces you'll absolutely need to build the figure. 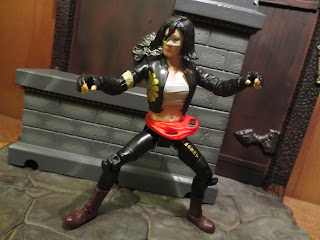 * Katana has all of the points of articulation you would expect but her range of motion with most of them is terrible. The elbows hardly bend and the balljointed head could easily have a greater range of motion due to Katana's short hairstyle. 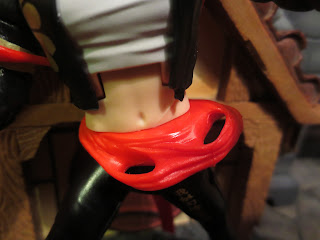 * Remove the scabbards from Katana's belt and you end up with two very large holes. Considering that the scabbards are pretty large and kind of intrusive, I can think of a number of reasons you might want to remove them. When you take them out, just keep in mind that this is what you're going to get. 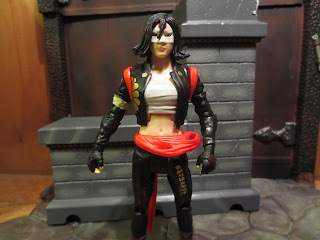 * Overall, there's just something that feels off about Katana's proportions. It's tough for me to put a finger on exactly what it is, but I think it might have to due with the fact that her legs and arms seem to thin for her wider torso. Again, it's tough to nail the problem down but it always jumps out at me when I'm messing around with the figure. 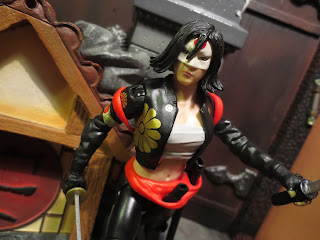 I do have to give Mattel props for releasing a pretty diverse array of figures in their Suicide Squad series (the only truly baffling exemption being the Enchantress) and for giving each figure a fairly unique sculpt. That's something that's becoming less and less common these days. Unfortunately, Katana's bizarrely limited articulation does hurt the figure. Being a master martial artist, she needs the freedom to move better than this. She's a Good and a 1/2 figure, though, and a character that hasn't been done much prior. I can imagine a lot of DCUC fans want to track her down for the collection.

The only other Katana figure I've reviewed so far was from the DC Collectibles New 52 2-pack Wonder Woman versus Katana. I've reviewed plenty of other DC Comics Multiverse figures from Mattel, including: