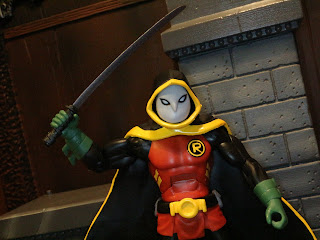 While I love the DC Collectibles Bombshell figures and I think that Mezco's One:12 Collectives are among the best (if not the best) DC Comics action figures ever made, I gotta give Mattel credit for being the only company right now who seems to be creating actual comic inspired figures from more recent stories (yes, it feels like DC Collectibles has given up in this area). Today I'm looking at one of those figures: Damian Wayne from his role in Robin War. I'll admit that while I've ready most everything vaguely Batman related from the New 52 and Rebirth, somehow I let Robin War and We Are Robin pass me by. It's in my pile to read right now, so I should be getting to it in the next few days. Having not read the story certainly didn't deter me from wanting to pick this guy up, though. Damian Wayne has really evolved into a great character over the past decade but his action figure appearances have been few and far between (my favorite is still the Batman Incorporated version from DC Direct). This is Mattel's second shot at the character (a Damian Wayne Robin was also released near the end of the MattyCollector only DC Signature Collection) and the results are a bit mixed. He's exclusive to Toys R Us and seems to be pretty easy to pick up online (pair him with one of the Wonder Woman TRU exclusives and you'll get free shipping, too!), so hopefully he'll fill a gap in a number of Damian-less collections. Let's take a closer look at this new release after the break... 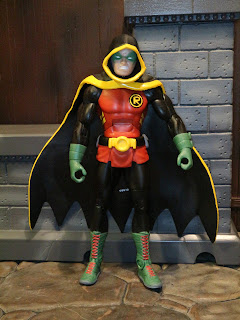 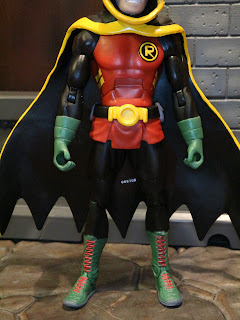 * Mattel did a nice job capturing Damian's modern costume in action figure form. The colors pop, the paintwork is good, and the lower tunic/ belt piece captures his costume's unique appearance, helping to differentiate him from other Robins. 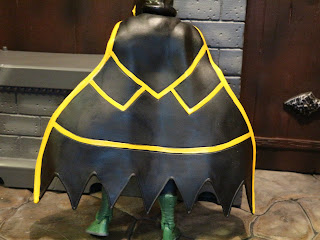 * Damian wears a long, flowing cape that is smartly decorated with some attention grabbing yellow highlights. You might argue it's not the most subtle look (Damian is rarely a subtle person, however) but it matches the comic as best as I can tell. The edges of the yellow lines are a bit rough, but overall I love the look. 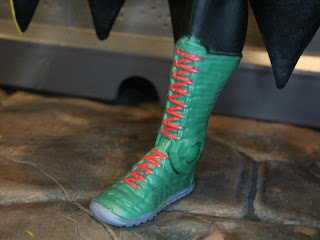 * Damian's boots are really cool, too. I'm digging the red laces and the grey, rubberized soles. Nice work here that definitely separates these boots from the classic Robin "elf boots." 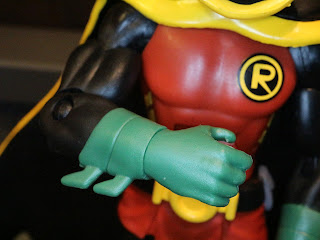 * I always complain when Batman or one of his companions has bent gauntlet spikes, so it's only fair that I also dish out praise when things are done right: Damian's gauntlet spikes are not bent at all! They look great! 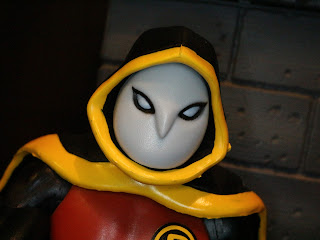 * Robin does come with a few cool extras to spice up the package. First, he comes with a Court of Owls mask that he can actually wear. It slips into his hood and simple friction just keeps it over his face. It looks awesome and radically improves the figure's appearance! 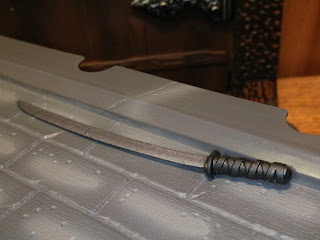 * Damian also comes with a sword. He loves swords, so it's only fitting that he should be wielding one, right? This is a pretty nice sculpt that's painted well and cast in a more durable plastic. Nothing gummy or rubbery here! 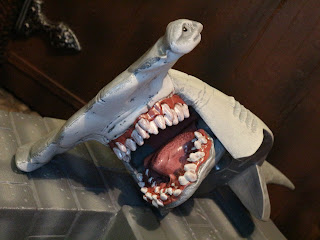 * Here's one of the big selling points for many folks, I'd wager: Robin comes with an alternate head for the incredible looking King Shark figure. This hammerhead alternate portrait features some excellent sculpting and wicked paint. I don't own him yet (I really want him, though) so I'll be hanging onto this piece until I can assemble one at a reasonable price. I think this guy is going to be the build-a-figure of the year for most folks (although Clayface could give him a run for his money). 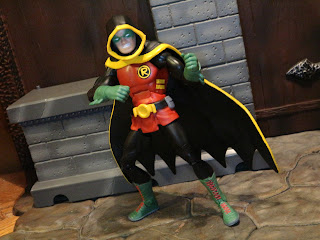 * Maybe it's not quite a negative, but recently I've begun to grow weary of the articulation model on Mattel's DC figures. Considering how awesome a job Hasbro is doing with articulation on Marvel Legends figures, and even the excellent work by Mattel on the WWE Elite line, having things like no ankle pivots, restricted hips, and a head that only turns just seems inane given what else is out there. 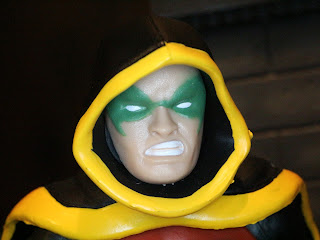 * I. Don't. Like. This. Face. Not at all. First of all, it's ugly. Really, really ugly. This doesn't look like Damian. It looks like the Robin from Kenner's Legends of the Dark Knight line. This is just some ugly work by Mattel. 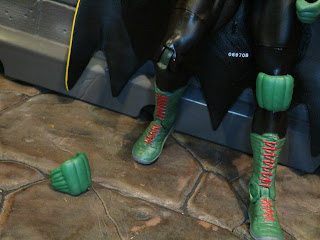 * To help make his costume look more authentic to the source material, Damian includes some kneepads. They stay on fine while on display but the minute you pick up the figure and do anything with it they are going to fall off. Nearly every WWE figure has kneepads that do not fall off; couldn't Mattel have taken some inspiration from one of their other properties and devised something better? 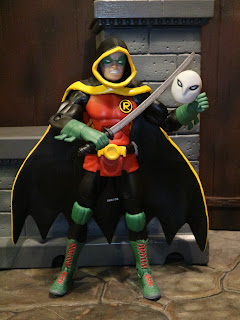 I have to admit that while there are some things I really like about this figure, overall I'm kind of disappointed in it. The awful headsculpt really kills it for me. The knee pads and articulation issues might be more minor annoyances, but that headsculpt is just a disaster. Fortunately, you can put on the Court of Owls mask (I'm really curious to see how that plays into the story; please don't spoil it for me in the comments!) and the figure is greatly improved. Damian's a Good and a 1/2 figure, but I really think he could have been one of the strongest Mattel DC releases yet with a few tweaks. Maybe that's what bothers me the most: There was so much potential here.


I actually haven't reviewed any other Damian Wayne figures, but I have reviewed plenty of other DC Comics Multiverse figures, including: