The Revenge of 31 Days of Toy Terror: Deathlok from Marvel Legends Series: Deadpool by Hasbro 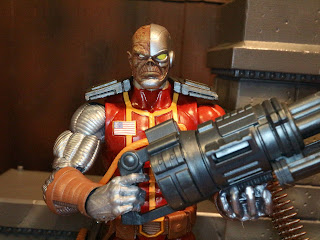 One of my favorite things about 31 Days of Toy Terror is that I get the chance to show off action figures from a variety of different toylines. Today I'm checking out a figure from one of the Deadpool themed Marvel Legends series released earlier this year: It's Deathlok! So, why does Deathlok warrant a spot on this year's The Revenge of 31 Days of Toy Terror? Well, first up his full name is Deathlok the Demolisher. That's pretty fearsome, right? Secondly, he has been known to both fight against and assist a guy named the Devil-Slayer which is unarguably pretty metal. Last, but not least, Deathlok just so happens to be a reanimated corpse brought back to life to fight in the future. Yup. Reanimated corpse with a massive gun. This is truly 31 Days of Toy Terror material right here, folks. Any questions? There have been lots of Deathloks but this one from the Sasquatch Build-a-figure series is meant to be Luther Manning, the original Deathlok. When I first learned this figure was coming I definitely liked the look of it, but you know what really excited me? I had the Toy Biz Marvel Superheroes Deathlok as a kid and he was always one of my favorites for some odd reason. I'm pretty sure the dude peg-warmed into the mid-90s but there was something unusual and sinister about him that I liked. Today we're going to give this cyborg a chance to shine like a Halloween Jack O' Lantern on today's installment of The Revenge of 31 Days of Toy Terror. Let's check him out after the break... 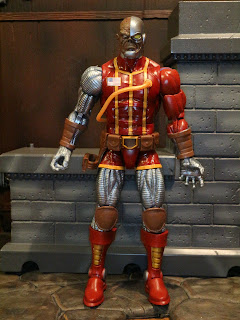 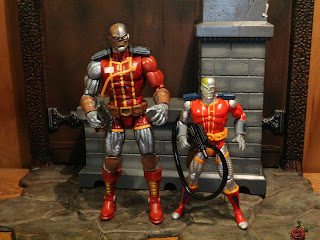 
* Here's a comparison picture of the new Marvel Legends Deathlok alongside of my original 1992 Toy Biz Deathlok. The Toy Biz Deathlok was released as part of the 3rd series of Marvel Superheroes and was in stores the same year that Toy Biz also launched the X-Men line. 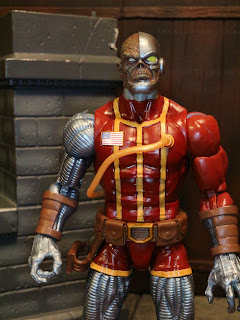 
* Deathlok is a very cool looking figure. I'm not a Marvel Legends expert so I'm not sure what parts are new and what parts are reused, although I'm willing to wager that the torso is new due to the chest tube and American flag patch on it. The cybernetic right arm is cool (maybe they were used with Colossus or Winter Soldier?) and I dig the armored bracers on the forearms. The paint scheme is really appealing and just seems like a color mixture that we don't see on superheroes that often. 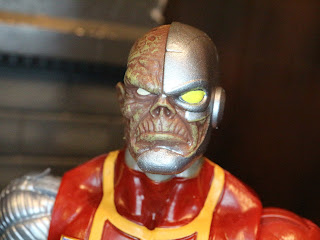 * I love the headsculpt. Luther Manning has a pretty pissed look on his face and the nasty bits of decrepit flesh are well sculpted and give a pretty solid paintjob. He kind of looks like a zombie version of Cyborg, doesn't he? Deathlok actually made his comics debut around 6 years before Cyborg (1974 versus 1980) so he's not a copycat, though. I love the look of the cybernetic parts of Luther's head, although the dome doesn't lift up like on the old Toy Biz version. 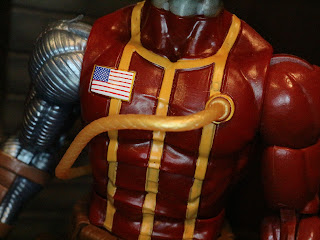 * Since Deathlok was originally US soldier Colonel Luther Manning he is still sporting the American flag on his uniform (although I think he turns against the evil corporation that created him, so maybe they just were branding him as a weapon to sell to the military? I'm not really a huge Marvel comics expert) along with an orange tube that runs from his chest to a little meter on the back of his belt. The tube is removable from his chest (the belt device is not), so I'm not sure if there is a story behind that or not. 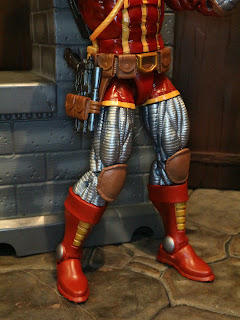 * Deathlok's cybernetic legs and funky "future" boots look really cool too, as does his nifty belt. The belt is covered with pouches and has a loop for storing the included pistol. 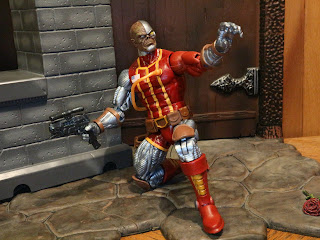 *  The articulation is as good as on nearly any other Marvel Legends figure and possibly even better. Deathlok definitely feels like a newer body sculpt and his articulation feels much smoother and more natural than some of the earlier Hasbro figures. He's a beast and he moves like he's ready for some mayhem. 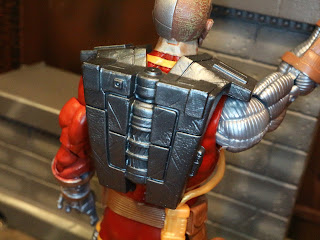 * Deathlok has a lot of accessories with him. First up is this backpack. It looks fantastic and it is removable if you want to take it off. There are lots of scratches and scuffs sculpted into it, so you know it has been around a bit. 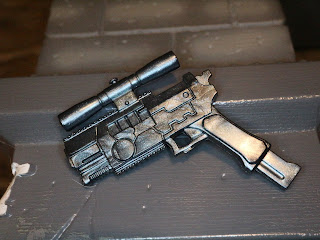 * Deathlok's pistol is one of my favorite action figure pistols ever. It just looks awesome. It's big and boxy, kind of like Robocop's pistol, and it has a scope and an extended magazine. I don't think that Deathlok is a particularly chatty guy so I suppose weapons like this do much of the talking for him. 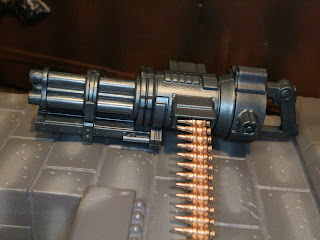 * When he feels like saying quite a lot, Deathlok probably switches over to this bad boy. It's preaching time, fellows! This looks like a minigun of some sort and it features a pistol grip, rotating barrels, and an ammunition belt that plugs into the side of the gun (it doesn't actually feed through, though).

*I bought this guy for a fraction of the price online due to him coming without the Build-a-Figure piece but if you buy him new, he'll also have Sasquatch's left arm. 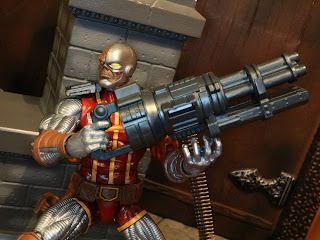 
* My only criticism of this figure is that the minigun is large, heavy, and there isn't a great way for Deathlok to hold it. It really needed some sort of handle on the top or the bottom so that his left hand could stead it better. He can cradle the gun but it doesn't look "right" in shooting poses. 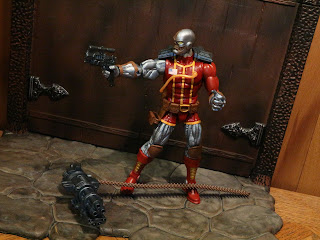 Maybe he's not the spookiest figure I've reviewed as part of The Revenge of 31 Days of Toy Terror but Deathlok still has a heck of a lot going for him. He's easily one of the best, if not the best, action figure of a cybernetically enhanced resurrected corpse wielding a minigun that I know of being released in 2018. I think that says a lot, don't you? He is an Epic figure and easily one of my favorite Marvel Legends releases of 2018. I doubt he's popular enough for Hasbro to do a vintage version of him (which is probably unwarranted) so if you dig him, grab him now!


This is the first action figure of Deathlok I've reviewed on the site. For more more figures from the Marvel Legends Series, check out the following: