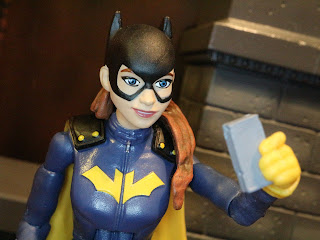 Mattel's most recent series of DC Comics Multiverse figures has some pretty current characters in it, including the most recent incarnation of Batgirl. Based on her redesign from he Batgirl of Burnside soft reboot during the New 52 era, this figure also stands in just fine for the current Rebirth era Batgirl. I've been reading a ton of Rebirth stuff lately (I read trades, so most of the volume 1 books are just hitting) and I'm loving it. While I certainly didn't have any ill will towards the New 52 (I read mostly Batman/ Gotham centric titles and those were all pretty good), Rebirth definitely seems to have a more consistent quality across the board. Batgirl stars in two titles in the New 52, Batgirl and Batgirl and the Birds of Prey, so this figure definitely represents a character who is currently available in comics in a costume pretty accurate to what they're currently wearing. I can dig that. Let's take a closer look at the Batgirl of Burnside after the break... 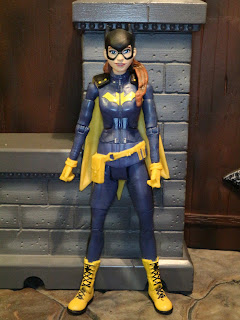 Accessories: Batarang, smartphone, and the left arm of the Killer Shark Build-a-figure. 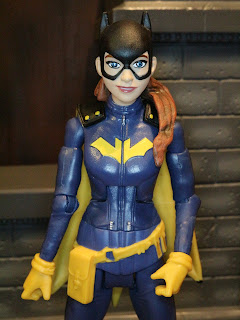 
* Not only do I absolutely love this costume (it's possibly my favorite Batgirl costume ever) but I really like Mattel's interpretation of it. They've done a very good job of capturing the art style of Babs Tarr and the 'feeling' of the character. This doesn't just feel like a purple and yellow generic Barbara Gordon: This feels like a Batgirl of Burnside incarnation of the character. I love it. The colors, the textures, and the overall proportions are just fantastic. 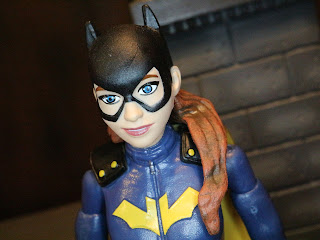 * The headsculpt is perfect, too. It's very nice. I actually like it better than the DC Comics Icons figure as it really looks like she walked off the comic panel. She's very cute, but in kind of a non-traditional comic way. I like it. The eyes are just perfect, too. 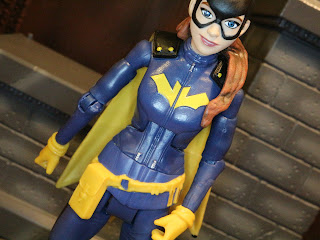 * There are quite a few little details that catch your eye on Babs here. From the buttons on her cape to the visible zipper seam down the middle of the jacket, all the way to her convenient looking utility pouch, Mattel has been very faithful to the character design. 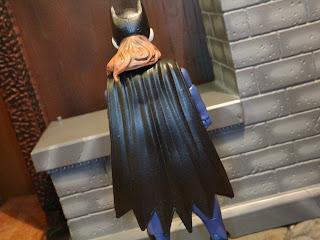 * The cape is really well done. It's a simple piece of rubber, but it's rather flexible and nicely painted yellow on the inside. 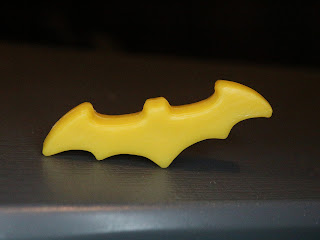 * Batgirl also comes with a batarang. It's rather small bit made from a very firm plastic that doesn't have any give to it. It looks great in her hands! 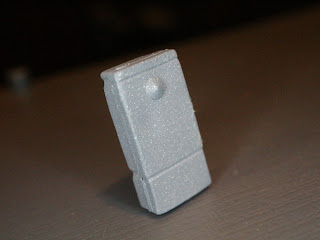 * Batgirl also comes with a smartphone. She used her phone quite a bit in the current comics (plus it appeared on the cover for the Batgirl of Burnside reboot), so it's a nice accessory to have. It's simple but, at this scale, it gets the point across.

*I (rather unwisely) picked Babs up without the build-a-figure pieces for a reduced fee as I only wanted three figures in the set, so I'm left without a piece of the very impressive King Shark. If you buy this new in the package, you'll get King Shark's left arm as an extra. 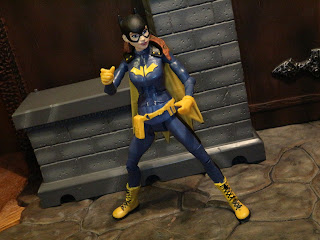 * I'm going to be a bit harsher on the articulation here than I usually am since Mattel usually does a much better job on the comic based figures. Other comic based figures with new sculpts have had swivel/hinge wrists and a better range of motion. Batgirl feels as limited as, if not more limited than, an older DCUC figure. Being that she uses an all new sculpt, the oddly positioned mid-torso hinge and lack of boot swivels really hurt things. 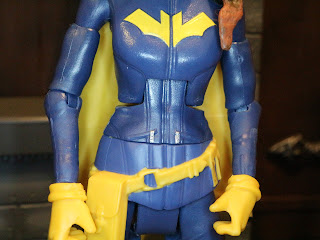 * Another problem with this figure? The oddly positioned waist swivel the odd looking mid-torso joint. These really look strange in person and hurt the aesthetic of the figure. 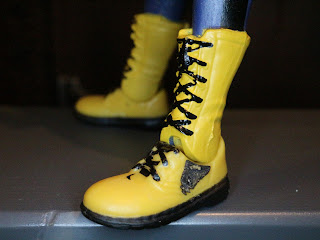 * I love that the Burnside Batgirl design uses yellow tactical boots rather than some uncomfortable high heel/ boot combo. It's much more efficient and practical, plus it just looks cool. These boots have some wicked paint problems, though. Besides a little more slop than usual, what the heck is that big black splotch on the side? Did Babs step in some road tar or something? 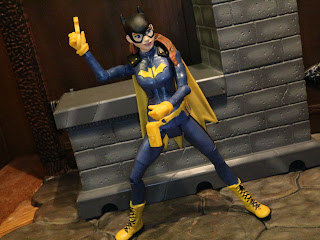 I really want to like this figure more than I do, but there are some problems. The articulation can be a bit clunky and definitely feels less impressive than I would have hoped. The presence of the weird stuff on Babs' boots hurts, too. Still, the style and aesthetic of the figure is overall pretty impressive, particularly the headsculpt (which I just adore). Batgirl is a Good and a 1/2 figure and I'm sure she'll be one of the more popular figures in a series filled with some real standouts. There are better Batgirls in this costume out there, though, although not in this exact scale. Choose wisely.

I've reviewed so much Batgirl stuff that she has her own section on my website! Check it out!