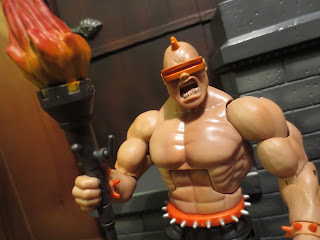 Wouldn't you agree that the Mutant Leader from Frank Miller's The Dark Knight Returns is monstrous enough that he could be included in 31 Days of Toy Terror? Mattel's DC Comics Multiverse may not be as impressive as Hasbro's efforts on Marvel Legends this year, but it's tough to argue that they haven't given us a pretty cool series of offerings this year. While I just reviewed one of Mezco's One:12 Collective Mutant Leaders a month or so ago, I also wanted to pick up Mattel's version. Mattel has really done a nice job releasing some cool Dark Knight Returns inspired figures and I wanted this version of the mutant leader to go along with them. Ready for a closer look at a creepy Batman villain who seems to be more monster than man? Then join me after the break... 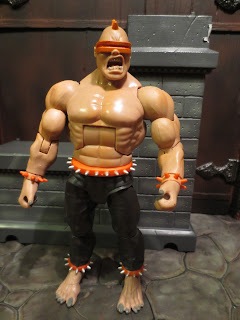 Accessories: Crowbar, torch, and the left arm for the Doomsday build-a-figure 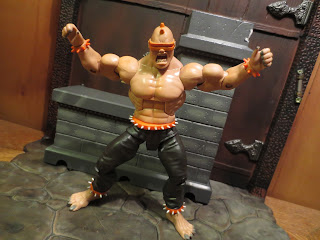 * Based on the Masters of the Universe Classics standard body, the Mutant Leader is quite well articulated and extremely sturdy. The beefier, brawnier style works great with the DKR subset of DC Comics Multiverse and adds to the character's imposing appearance. 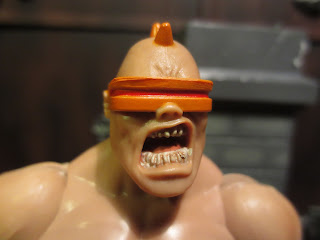 * This headsculpt is incredible. To be honest, I might like it a little better than the Mezco sculpt. The goggles look more substantial and the expression is just awesome. This guy truly looks like an animal, especially due to those crazy teeth and that wicked snarl! 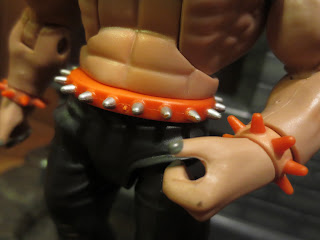 * I like that Mattel worked out some new wrist pieces and a very cool waist piece to give the Mutant Leader his full range of spikes. The wrist spikes do rotate as well, although I imagine that's just because of the design rather than being a play feature of some sort. 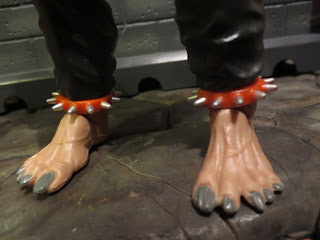 * Mutant Leader also has some nasty feet with hideous toenails and a set of spiked collars around his ankles. These are also grotesque in the best possible way. 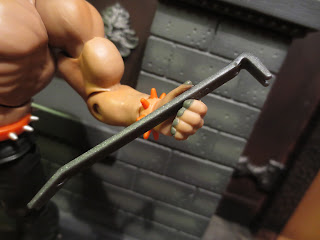 * The Mutant Leader comes with a crowbar. It's a simple accessory but what more can you really do with a crowbar, right? It looks good, fits in his hands, and presumably breaks bones. 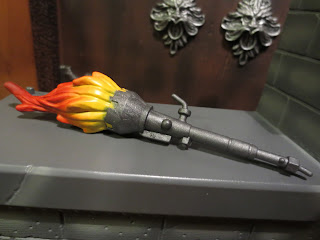 * I really dig the cool torch that the Mutant Leader comes with. It looks great in his hands and, while it doesn't use any translucent, just adds to his terrifying vibe. This thing looks kind of complicated. I wonder what it's built from? 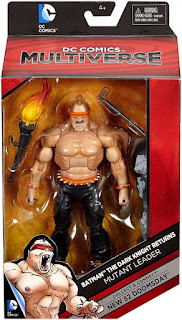 * I actually just sold all of my Collect & Connect pieces from this series, so I don't have a piece to show you, but I will let you know that the Mutant Leader comes with the left arm of the New 52 Doomsday. While I didn't feel the need to build this figure I still appreciate Mattel adding build-a-figures into the line. Not only does it give you some extra value if you're collecting the entire series (or help you recoup a few bucks if you're not interested in a particular figure) but it also somewhat helps to prevent shelf warmers. Not perfectly, but BAFs can, when done right, help with that problem that plagues the action figure industry. 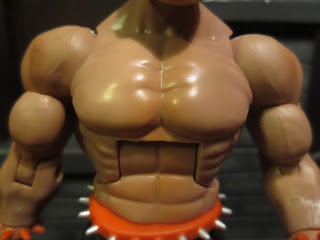 The Mutant Leader does not have his distinctive nipples. Yes, that sounds really weird, but look on the packaging image above or at this link: The distinctive spiky nipples are as much a part of the Mutant Leader's looks as his crazy glasses or his insanely sharp teeth.  Considering that the picture of this guy is right on the front of the box, I tend to lean towards this being a cost cutting issue rather than a censorship one. 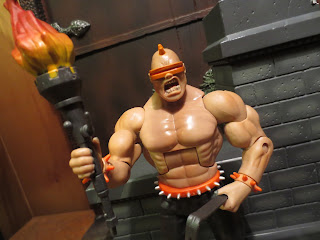 While Mezco's Mutant Leaders (they've released two versions) are incredible, Mattel's is honestly pretty impressive too. It's also only about 1/3 to 1/4 of the price and has some elements that I actually like better. Of course, the lack of nipples on this guy is weird only because they're so prominent in the comic and they're big armored spikes. Considering you can grab this guy for $20 or less at a few different retailers, he's a really nice figure and definitely a good addition to Mattel's DKR figures. He's a Great and a 1/2 figure and worth adding to your collection if you dig the Caped Crusader and his foes.

If you're looking for more of the Mutant Leader, check out my review of the SDCC 2015 One:12 Collective Mutant Leader vs Batman set.

I've reviewed plenty of other DC Comics Multiverse figures, including: