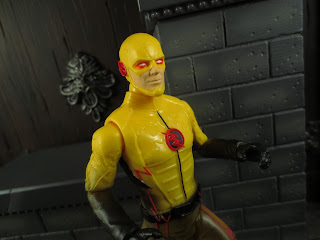 This intro is going to follow many of the same beats as yesterday's review of the Arrow: I'm a terrible TV watcher and so far as the new DC shows go, I've watched about 4 episodes of Arrow and 3 episodes of Gotham. I just have a hard time getting myself to sit down and watch TV even though I want to keep up with all of those shows. I am, however, a fan of most DC action figures and I really wanted to build Batman's Justice Buster, the "Collect & Connect" figure from this first series 6 inch of DC Comics Multiverse figures. I was in my local Wal-Mart a week or two ago and I found an unopened case of wave two of this series. I already had picked up the Zero Year Batman figure but I decided to grab Reverse Flash and Earth 23 Superman along with an Arrow that was on the shelf so I could build the Justice Buster. That's the power of build-a-figures, people! They'll make you pick up figures you were on the fence about! Ready for a closer look at the main villain of season one of The Flash, Eobard Thawne, AKA Reverse Flash ? Then join me after the break... 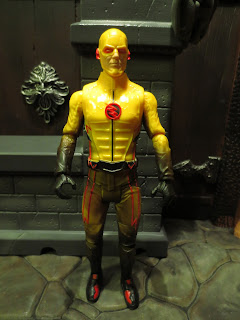 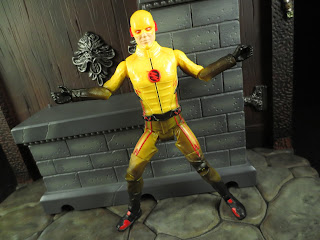 * He's not as articulated as the other DC Multiverse figures which utilize the DC Universe Classics style of articulation, but he's got enough joints to get a few decent poses. Everything feels nice and sturdy here and the joints have a nice range of movement. While  do wish that Mattel would try to put these figures in scale with the basic comic inspired figures, Reverse Flash is a rather decent toy. 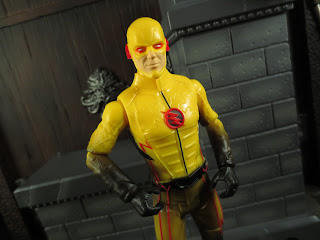 * His sculpt is quite sharp. It's not incredibly realistic (and could easily fit into a comic inspired collection) but I like both the design of this costume and the little details present all over the suit. There are a number of unique textures here and plenty of little raised elements such as Reverse Flash's lightning emblem, the lightning bolts on his chest, and the ribbing on his torso. Mattel did a nice job with this guy overall and, as far as I can tell, he is completely unique from the Flash. 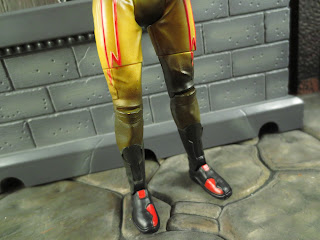 * Having not watched the show, I'm not sure what the layers of black grime or ash on Thawne's suit are, but it looks really cool. I thought that maybe it was some sort of build-up of junk and residue from traveling through time. I showed the figure to my wife (who watches the show) and she couldn't give me a clear explanation. She thought maybe it was supposed to create some sort of a motion blur effect to represent him running. Either way, the paint work is a highlight on this figure, particularly an interesting element like this. 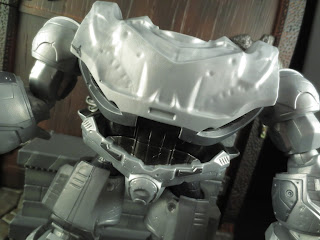 * Reverse Flash comes with perhaps the largest part of the Justice Buster: The torso and the waist. Both pieces can snap together here. The only articulation is a mid-torso hinge (no swivel waist). I'm not going to spend much time on this piece since I'll be reviewing the Entire Justice Buster sometime next week, but so far so good. 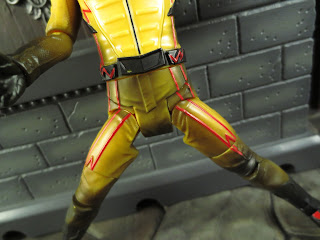 * Mattel uses a different style of hips for many of their TV and movie inspired figures and I have to say that they look kind of awkward. I wish they'd use something more like their WWE figures or Hasbro's Star Wars Black.

*I know he comes with a pretty big BAF piece but I wish Reverse Flash came with something else that he could interact with. 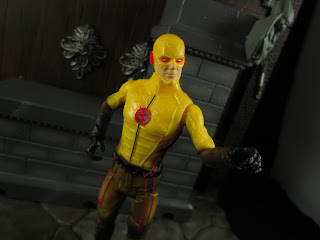 While I'm not building a DC television collection right now, I'm still pretty pleased with the Reverse Flash. Besides the quality of the figure itself, the color scheme also is just really appealing and he absolutely stands out on the shelf. Of course, if you're going to build the Justice Buster you'll need the pieces he has. He's a Good figure and if you're collecting this line and interested in the TV series, you shouldn't be disappointed.

This is the first figure of the Reverse Flash I've ever owned. I have reviewed other figures from this same series and other DC Comics Multiverse sets from Mattel: