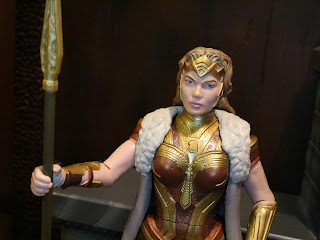 Today I'm looking at the fourth standard figure in the Wonder Woman inspired DC Comics Multiverse line from Mattel: Queen Hippolyta. Played by Connie Nielsen, Wonder Woman's mother Hippolyta is slated to appear in both Wonder Woman and Justice League. While the Wonder Wman Multiverse thus far have been just OK, Hippolyta bucks the trend by being pretty good. She's one of the best Multiverse figures we've seen released, particularly in the movie-based lines. How cool that we're getting a Wonder Woman specific line too, right? A few years back, when most manufactures only wanted to short pack the few female figures in a line, the thought that Wonder Woman would get her own line seemed highly improbably. Now we've received a line dominated by female figures. Pretty cool, right? Let's take a closer look at this battle ready queen after the break... 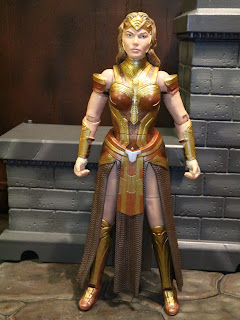 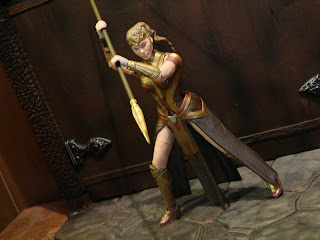 * Hippolyta's articulation isn't much different than any other film based Multiverse figure, but the construction seems more thoughtfully designed. While she's wearing a robe of sorts, the cuts in the robe make sure that the legs are still somewhat functional. She's sturdy, well built, and can use her weapons in a few convincing poses. 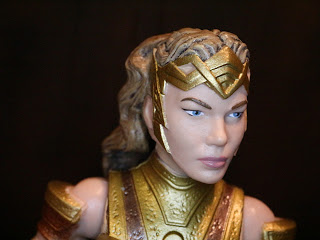 * The most consistent improvement in this line, compared to other movie based Multiverse lines, are the headsculpts. All of the headsculpts have been incredible and Hippolyta is no exception. She's quite gorgeous and bears a strong resemblance to Connie Nielsen. The paintwork is excellent, too. Very neat and clean. Heck, even the hair is quite intricately sculpted. 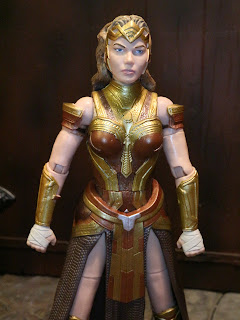 * Queen Hippolyta has one of the best outfits in the Multiverse line. The mixture of browns and golds looks incredible and makes for a very impressive looking figure. There is so much detail in the armor which is covered with some extremely intricate fine details. 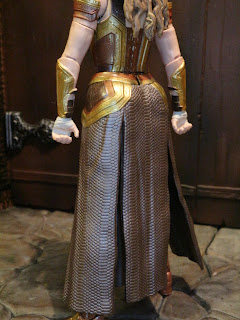 * Even Hippolyta's skirt has a really cool texture to it. There is also some visible lacing on the back of her bodice. 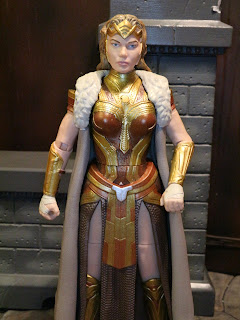 * Hippolyta comes packaged wearing a simple robe with a fur collar, but guess what? It's easily removable! Not only that, but the collar is removable without any elements permanently sculpted onto the figure. It's nice to have two different looks for the figure. While the robe makes for a more regal appearance, without the robe the articulation moves much more freely, too. 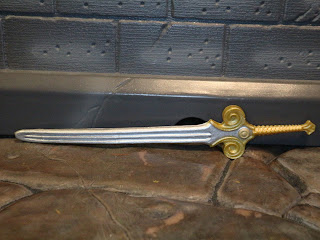 * Hippolyta includes a sword which has a very cool hilt. Everyone in this line has their own unique sword and Hippolyta's may very well be the most impressive. 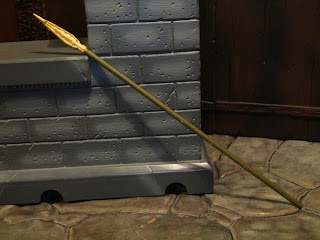 * She also includes a spear. The shaft is pretty plain, but the tip has some very unique detail. Also, this weapon doesn't feel brittle at all. In fact, but weapons feel pretty sturdy. Not too brittle, not too rubbery. 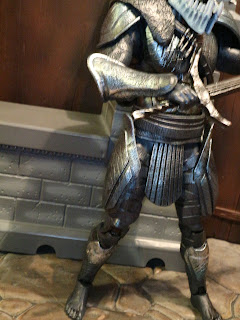 * Hippolyta includes the final two pieces of the Ares build-a-figure: An arm and a leg. I'm going to review Ares on his own tomorrow, so I'll get into him in more depth tomorrow, but I will say that the details are pretty solid with great paintwork. 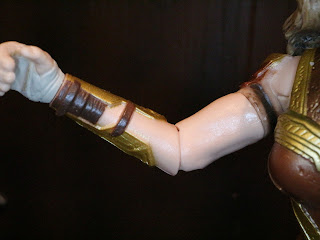 
* Hippolyta's elbows really don't have much of a range of motion to them. They're a swivel/hinge joint, but the hinge just doesn't allow for too much motion. 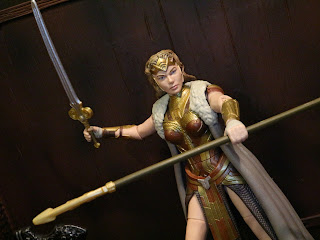 Out of the first four figures in the Wonder Woman series (there are two retailer exclusives still yet to be released) Hippolyta is the clear winner. She's a stunning figure with good accessories, an excellent sculpt and paintjob, and the ability to add or remove her robe to give her two display options. Queen Hippolyta is really an impressive action figure and definitely a Great and a 1/2 addition to the line. Being that this is the first Queen Hippolyta action figure released, she's a pretty cool addition to a DC Collection as a whole.

I haven't reviewed anything else relating to Queen Hippolyta, but I have reviewed plenty of other DC Comics Multiverse figures from Mattel, including: