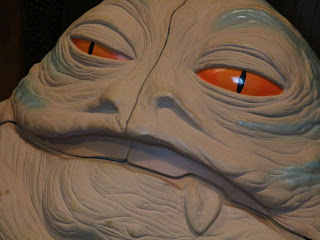 Back in 2016 Jabba the Hutt made an appearance during the 31 Days of Toy Terror representing that special type of horror that only giant, slimy slug creatures involved in organized crime can instill, so guess what? Jabba is making another appearance for The Revenge of 31 Days of Toy terror! Today I'm getting the chance to combine a few of my favorite things: Star Wars, a horror toy review, and Micro Machines! For this, the 25th day of The Revenge of 31 Days of Toy Terror, I'm checking out the 1997 Micro Machines Jabba/ Mos Eisley Spaceport Transforming Action Set from Galoob. Released in 1997 to coincide with the release of the Special Editions of the Star Wars films, this set shows off many of the additions made to the Special Edition of Star Wars: A New Hope: A ronto, improved dewbacks, a swoop rider, an Imperial landing craft, and Jabba the Hutt himself. It's not a terribly expensive set on the aftermarket but it is one of the less common ones you'll find due to its appearance later in the line. Let's check out this awesome Micro Machines playset housed inside the body of a hideous Hutt after the break... 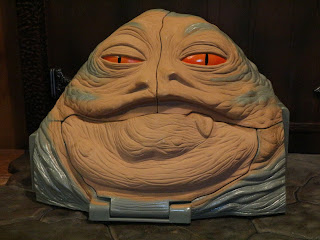 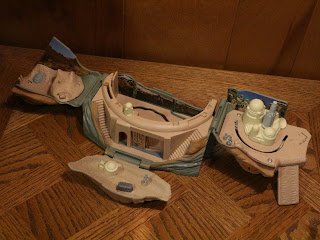 * The Jabba the Hutt set is pretty cool looking as, #1, it looks like Jabba the Hutt. I like the sculpt and the use of a character with a non-traditional body shape being used for one of these playsets. Jabba opens up a bit unusually by folding out in three places to create four separate play areas. The set feels a lot larger inside than most of the Transforming Action Sets. 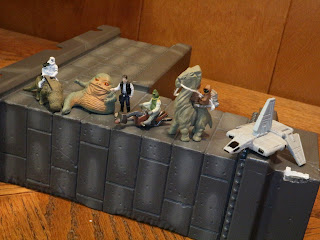 * Later in the line Galoob began to decrease the number of figures included with each set. While Jabba doesn't have the six figures and one vehicle of most sets, he does have a few much larger figures such as the Dewback with Sandtrooper, the Jawas on the Ronto, and the Swoop bike with rider. We received lots of Jabbas, Hans, and Rontos in the line but the Dewback with Sandtrooper and this particular Swoop and rider were pretty slick. All of the figures are nice, though, with the improved sculpting seen later in the line. 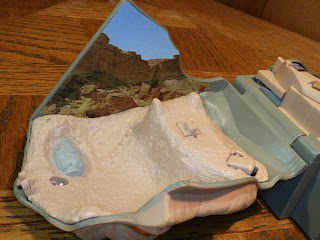 * Let's start with the play area to the far left of the open set: It's the Tatooine desert. It's a pretty decent sized piece of land with a sticker on the back that shows off part of the desert canyon. Galoob used Tatooine as a setting for a number of the Micro Machines playsets but this is the only playset that shows off the escape pod from the Tantive IV. Also, is that a strand of perfectly placed rocks or the bones of a Krayt Dragon protruding up from the desert floor? 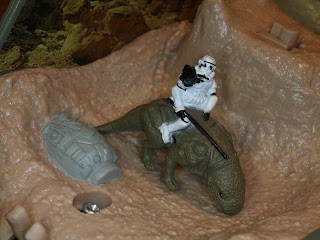 * Here's a closeup of the Sandtrooper atop the Dewback! He's sporting the black pauldron of the enlisted Sandtroopers and looks pretty cool on the 1997 update of the Dewback. The Dewbacks were everywhere in 1997 thanks to their update in the Special Edition, so Galoob certainly didn't want to get cost missing out! 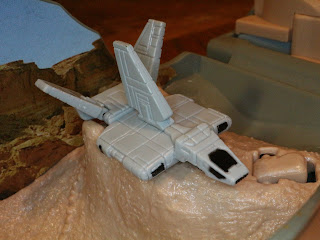 * Another cool inclusion for this set is the Imperial landing craft, also called a Sentinental-class landing craft. While these first appeared in the Special Edition of A New Hope they have made their way into lots of other Star Wars media, including fairly frequent appearances on Rebels. It's a nice looking miniature and it features movable wings. There is a special post that you can attach it to so that at the press of a button... 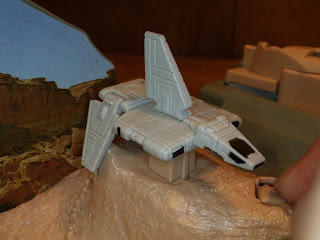 * It lifts off! The post raises up and the wings fall down. To be honest, I kind of wish we had received a fixed wing version of the vehicle, too, but this one is still pretty cool. This action feature reminds me of the Imperial Landing Shuttle's landing feature from the Royal Guard/ Death Star II playset. 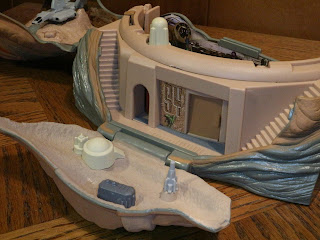 * The front of the set folds down to reveal the Mos Eisley streets right outside of Docking Bay 94. There are some stairways heading to the other play areas, a couple of doors, and some random junk strewn about. 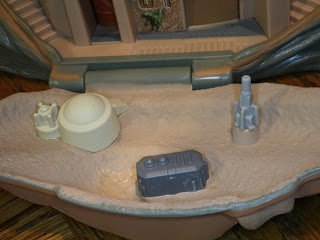 * I love this random stuff! It just makes the set feel alive. Not only is it all colored differently but the pieces are even separate pieces attached to the set. Galoob really put a lot of effort into these little works of art, didn't they? 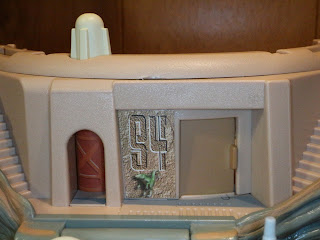 * Here's the exterior of Docking Bay 94, clearly marked with the big "94" on the wall. There's a little green varmint hanging out with a red doorway to the left and the entry to the bay on the right. 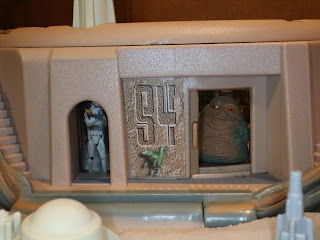 * When you turn the knob above the red door it opens up to reveal a Sandtrooper popping out. The door for Docking Bay 94 simply slides open so you can go inside to meet Jabba the Hutt. You're in deep poodoo now! 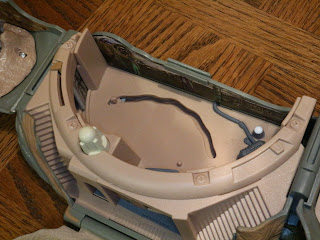 * From above you can see Docking Bay 94 itself. It's a large semicircular play area with lots of intricate features. 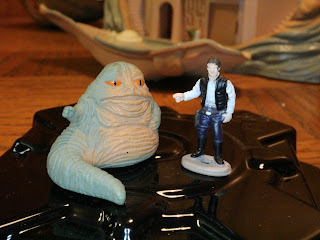 * Included to reenact the Jabba the Hutt and Han Solo confrontation that seems like entire reason the Special Editions were made are micro figures of Jabba and Han. Jabba definitely looks more like the Special Edition version of the character than the ROTJ version. Han is a better sculpt than most we've seen before with far better paint ops too. And what's this? It looks as if he's making the Ford Finger! 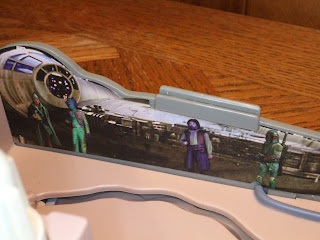 * Across the back of the set is a plastic backdrop of the Millennium Falcon along with some of Jabba's minions (and Boba Fett!) 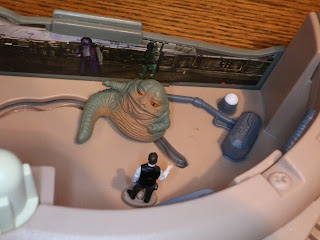 * There is a peg to hold Han Solo in place. Jabba the Hutt fits on another peg that can move across the floor when you turn the cylinder in the bottom left corner of the picture shown here. He kind of slithers across the floor, which is a pretty cool feature. 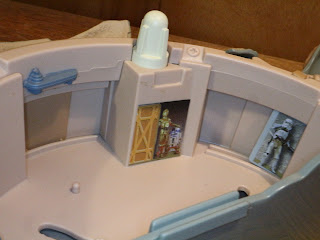 * The front of Docking Bay 94 shows off R2-D2 and C-3PO peaking out of a door while another Sandtrooper is quietly watching the proceedings. from a corner. 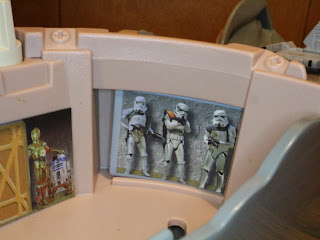 * Slide out a lever and the Sandtrooper calls in some reinforcements! Two other Sandtroopers also pop out from around the corner to confront our heroes! 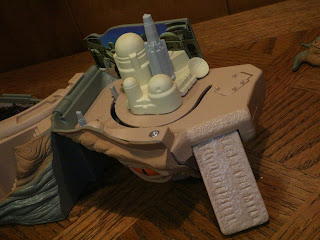 * Lastly, on the right side of the set is one of the busy streets of Mos Eisley. There's a fairly elaborate cluster of buildings and a pull down ramp. 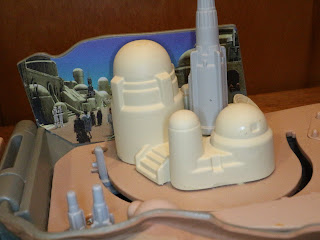 * The building cluster is pretty cool and the backdrop is quite elaborate and lovely. 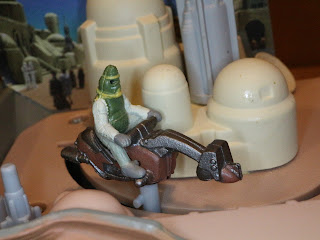 * I really dig the Swoop bike with the rider in the odd green helmet. He looks pretty gnarly and he fits on a peg. Turn the grey turret on the base and he speeds through the streets of Mos Eisley, sticking it to the man left and right. 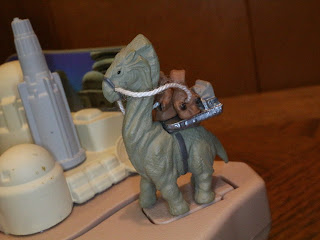 * The Rontos were another big addition to the Special Edition of A New Hope. This Ronto has two Jawas balancing on his back, held on by an actual string. There is a special spot that has foot pegs for the Ronto to stand upon. 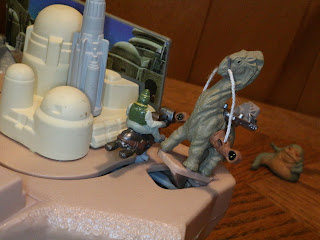 * As the Swoop bike approaches the Ronto the beast will "rear" back, sending the Jawas flying. It's a cool feature and it nicely replicates what was seen in the film. 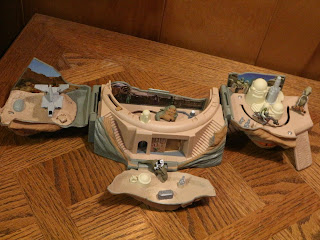 If you were there you remember that the Special Editions were a big deal and both Galoob and Kenner made sure to include multiple toys referencing the characters and vehicles appearing in them. While Galoob kind of overdid it with Mos Eisley (Mos Eisley was the basis for at least four playsets) this one does offer a lot of space, variety, and some fun play features. It would have been nice to have a few more interesting figures like Garindan or an individual Sandtrooper included but, as it stands, it's a nice set with a great Jabba the Hutt sculpt for its exterior. I'd give this one a Great and a 1/2 as it has a fantastic design and really offers up a lot of play value. If you don't own this one it's absolutely worth tracking down and can typically be found for around $30 dollars still in the box.

It's not quite the same but if you're looking for another Swoop bike I did review the Black Series release of Enfys Nest's Swoop Bike.

If Jawas are your thing make sure to check out my review of the 40th Anniversary Collection Jawa.

This set includes the first Ronto and first Imperial Landing Craft I've reviewed on the site.