The Revenge of 31 Days of Toy Terror: Christine from Johnny Lightning: Fright'ning Lightnings by Playing Mantis 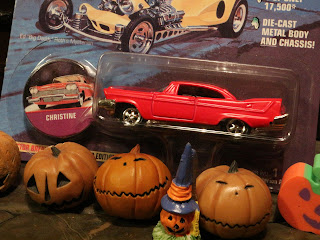 Five years ago today, during the first year of 31 Days of Toy Terror, I reviewed NECA's Bloody Carrie from the 2013 Carrie remake. I've always been a sucker for Stephen King inspired toys as I wanted them to happen when I was a middle schooler first getting into Stephen King's books and the movies they inspired. One of the few Stephen King inspired toys that I did have when I was younger and first getting into toy collecting was this die-cast metal Christine from Playing Mantis' revival of the Johnny Lightning brand. Released under their 1996 subset of horror vehicles called called Fright'ning Lightnings, Christine is inspired by the titular 1958 Plymouth Fury from the 1983 book and John Carpenter film (yes, they both came out the same year!). I remember getting this as a gift as a kid and since it had cool packaging that made it feel unique, it was one of the few toys I ever kept in the package. Ready for a "rundown" on this cursed car? Then let's check it out after the break... 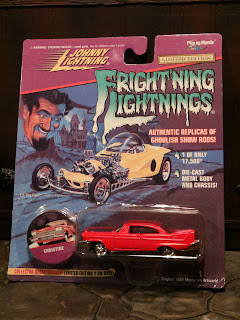 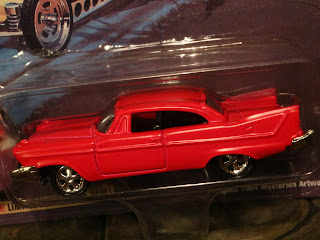 * Christine is a very nice looking model that pretty accurately captures the look of a 1958 Plymouth Fury. The detail is very strong and the color is quite vibrant. The color seems to be a bit more pinkish rather than the red of the film, but that could be due to some fading. 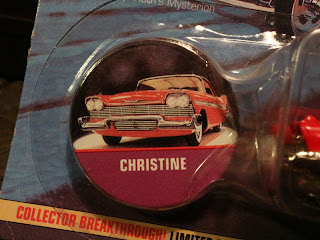 * While it isn't labeled as a collector's cap or a POG or anything like that, Christine does have a small round cardboard disc with an image of the car on it. It's kind of cool and makes for a nice way to "customize" the package without actually using separate backer cards. 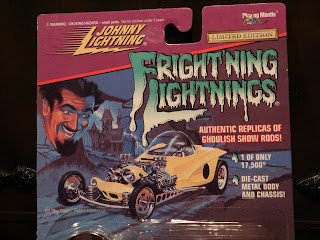 * The backer cards on Johnny Lightning cars are usually really, really nice. I only have a handful, all from the Playing Mantis era, but they are all very cool. This one features the original 1964 artwork for the Ed 'Big Daddy' Roth Mysterion car that is featured in this set. It's kind of cool and gives the package a nice, classic feel. 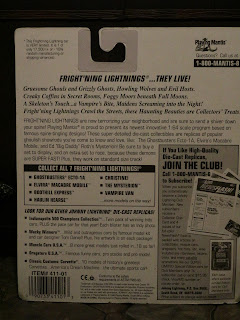 * The back of the backer card isn't unique to Christine but it does have some cool flavor text, including a cool poem about the cars in the set and a list of the other cars in the series. 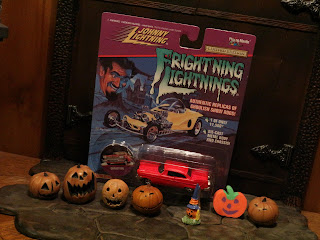 Considering that these came out in 1996 (or early 1997), you can definitely make the argument that Playing Mantis beat McFarlane Toys' Movie Maniacs to the punch in releasing a toyline consisting of products from a diverse array of horror properties all sold under one banner. Stephen King and John Carpenter fans were the winners here as this was the first toy based on the work of either of those horror icons that I can remember. If you remember something earlier, let me know! Christine is a pretty Great collectible and can still be picked up for a reasonable price if you search around a bit.