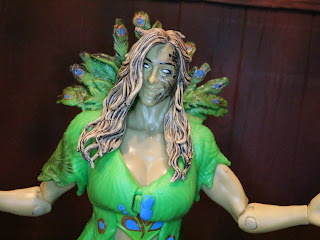 Well, well, well... isn't this a pleasant surprise! I wasn't expecting to get my hands on the third series of WWE Zombies so soon but not only did I find 5 of the 6 figures in this series in stock at Ringside Collectible but I also found figures with damaged packaging that saved me quite a few bucks. Woo! The WWE Zombies line has been one of my favorites for a few years now and I'm glad to see it continue with a mixture of new Superstars and a few old favorites as well. I actually had already finished the Revenge of 31 Days of Toy Terror lineup before I received these so I'm going to just stick them in during the day as bonus reviews. You're welcome! Today I'm checking out Charlotte Flair, the lone female in this series and one of the most talented individuals in wrestling today. Period. Charlotte is the daughter of Ric Flair but she absolutely has cultivated her own image and style. And now we have her as a zombie in her famous peacock entrance outfit from Wrestlemania 33. Unless you watch this video, this action figure might be the craziest thing you see all day!  Crazy awesome, though. Let's check out Charlotte Flair as a queen zombie after the break. Woo! 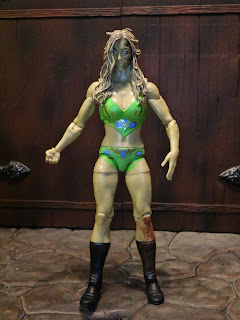 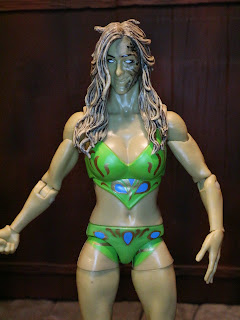 
* Here is zombie Charlotte Flair! Charlotte is clad in a two piece green and blue outfit that has some nice painted detail and matches her peacock robe (which we'll get to in a minute). As a zombie, Charlotte's has taken on a yellowish-green color that definitely shows this isn't just the regular Charlotte on an off day. While some folks have no desire to collect wrestling figures, Mattel is making some great 7 inch scaled fairly standard looking zombies in this line so even if you have no idea who Charlotte is, zombie fans should find a lot to like here. 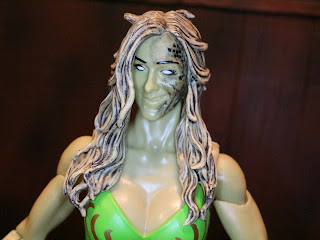 * The headsculpt is pretty good and does a nice job of capturing the likeness of a zombified Charlotte. The face shape and expression works really well here and I like the addition of the odd skin rotting on the side of the face. Charlotte often wears glitter on the side of her face and the odd skin markings seem to pay tribute to this. The hair is really detailed and definitely adds to the creepy vibe. 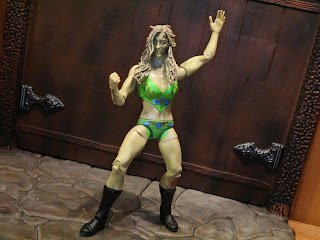 * While the standard WWE figures are divided up into Basic and Elite articulations, the women only have Elite styled articulation no matter what line they are in. That means that while the men in this line have more limited hip motion and mostly no torso movement, Charlotte can move with the best of them. These are durable, fun figures and while they might scare a kid, they're well suited for play. 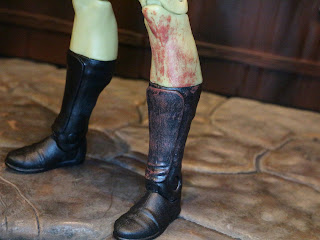 * Mattel does some really nice paint applications on these. While there isn't any damage on Charlotte's legs, her left boot and shin is covered with a bloody mess. Solid work and unbelievable that Mattel is putting these out at mass retail! 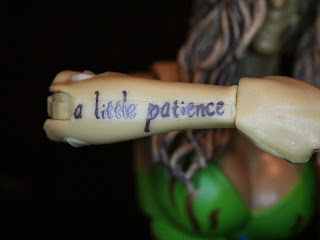 * While she's a zombie, Charlotte is still sporting some ink. You can actually see the bottoms of the crosses on her sides and the words "a little patience" are tattooed on her right forearm. This comes from the Guns & Roses song "Patience" and is a tribute to her late brother, the professional wrestler Reid Flair. 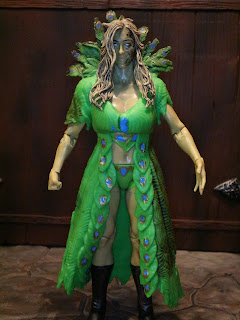 * So... Charlotte Flair comes with full entrance gear. Woo! Seriously, this is a pretty big extra as entrance gear is often one of the things that separates Basic styled figures from Elite figures. The Zombies are somewhere in the middle price wise as they feature lots of unique sculpting, but the inclusion of the robe is awesome. It looks great and really completes the look of the character! The fit is quite good and the paintwork is slick. Again, this pays tribute to her entrance at WrestleMania 33 and it's really cool. 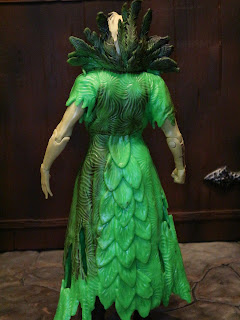 * Not only is the robe just cool looking but it's even tattered. Mattel didn't simply reuse the piece from another figure; this version is tattered, torn, and covered with some sort of unknown blaskish-brownish substance. Do we really want to know? Nope, not really! 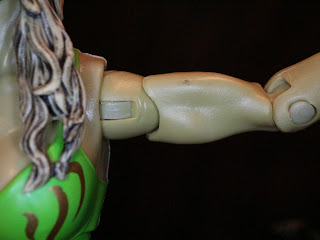 * I've always praised the Elite styled articulation on the figures, but I do have to make mention of a problem with the biceps being a bit weak. This has been a problem with the female figures for quite awhile as when you go to move the swivel/hinge shoulder, it is much more likely that the bicep will bend versus the hinge on the shoulder. I wish the bicep peg was a bit sturdier. 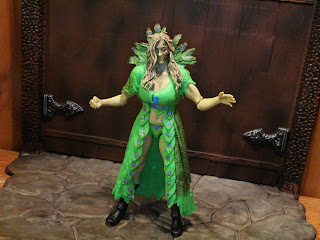 Man, I love these WWE Zombies and, while this is the first one I've reviewed for Series 3, Charlotte is going to be tough to beat as she is a Great and a 1/2 figure. She has two distinctive looks, great articulation, and a ghoulish design. I'm hopeful that we'll see this line continue on. There really just aren't a lot of good zombie action figures released in this scale and style and these should just be delightful to horror collectors and customizers. Now, who should be in series 4? Personally, I'd like to see Alexa Bliss. She would make a great zombie, right?

If you're a fan of Charlotte Flair, I've also reviewed the first Charlotte from Mattel's WWE Basic line.