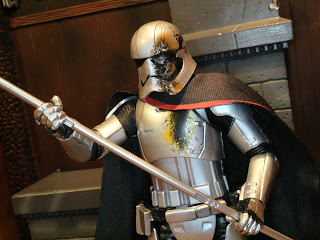 Earlier this year something pretty peculiar popped up completely announced from the wintry wilds of the Great White North: An exclusive Captain Phasma action figure was popping up as an exclusive in Canadian Toys 'R Us stores. It was pretty interesting as this figure hadn't been announced or teased in any way that I'm aware of; she just started shipping. Since SDCC 2018 we've learned that this new version of Captain Phasma from The Last Jedi, marketed as Captain Phasma (Quicksilver Baton), will appear in the US as a Disney Store exclusive at some point. Who has time to wait for that? I managed to get her through my secret network of Bothan spies and now we have a review of a new Captain Phasma action figure from Star Wars: The Black Series Phase III. No Bothans died in bringing you the following review although one developed a bit of gout from eating too much Rancor jerky.... 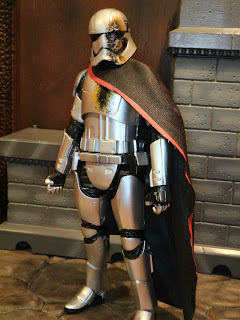 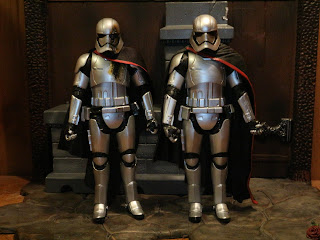 * Here's a quick shot of the original Captain Phasma from TFA on the right and the new TLJ Captain Phasma on the left. Since this new Captain Phasma shares so much with the original figure (entire body and blaster) I will refer you to that review for all of the finer points of the articulation and the sculpt. I'll just cover the new points here. 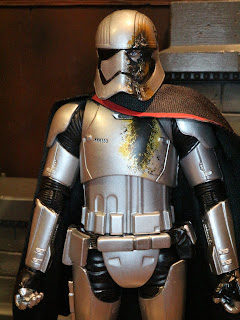 * Captain Phasma looks excellent. I'm still glad that Hasbro uses silver paint rather than trying to vac-metallize the figure. I think the silver paint just looks so much better. She's a solid sculpt that still holds up pretty well considering that it has been about three years since she was first released. The biggest difference between this figure and the previous release is the battle damage from Phasma's fight with Finn onboard the First Order Supremacy. The damage is just painted on but it does look quite a bit like the damage from the film (sans the dramatic lighting, of course). I love very scene specific Star Wars figures and this one definitely works for me. 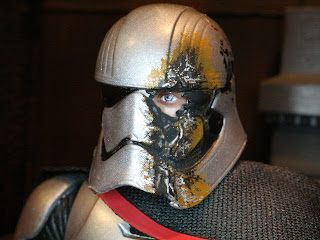 * The helmet is really cool. It's a completely new sculpt that features lots of scarring and damage on the helmet from where Phasma took a direct blow from Finn's Z6 riot baton. Not only is the damage present but we can see Phasma's eye through the hole, just like in the film. I really liked the Phasma novel by Delilah S. Sawson and I'm glad to see some element of Phasma revealed without her armor. I kind of hope she somehow comes back one more time. She's scheduled to appear in Resistance but that's set before TFA, I believe. 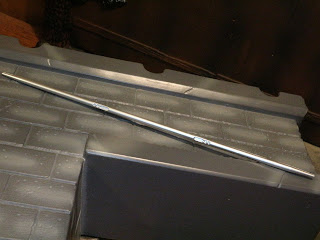 * Since this is Captain Phasma (Quicksilver Baton), Phasma comes with her Quicksilver baton from The Last Jedi. It's a long, silver staff that has a few little techy elements blended into the sculpt. It looks like its onscreen counterpart, so that's a plus. 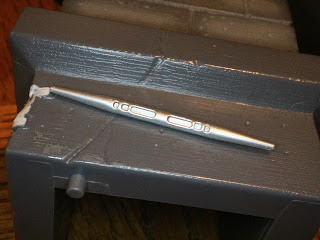 * In the film Captain Phasma whips out her baton and it extends to its full size nearly instantly. To help "create" the effect, Hasbro included the retracted version of the weapon. You know, little accessories like this really make a Black Series release feel deluxe. I wish more figures included them. 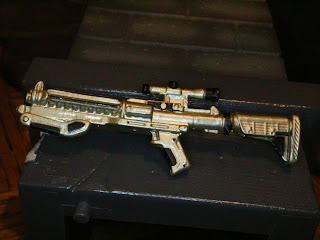 * Like the original figure, Phasma comes with the same blaster as before. While at a glance it doesn't look too different from the F-11D blaster rifles the standard First Order Stormtroopers carry, the front stabling grip, the trigger, and the macroscope are quite different. The design actually reminds me a bit of the E-11s which the Imperials used. Phasma can hold it quite nicely, even in a two-handed grip.

* The last big difference between the original Captain Phasma and this new figure is the inclusion of an actual soft goods cape. The way it drapes over her left shoulder looks perfect and it doesn't inhibit any articulation. This is an excellent improvement and I really like it. Like the Dude's rug, it really ties this figure together. 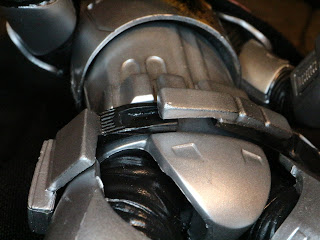 
* The belt on my Captain Phasma was loose and doesn't appear to have been glued on well. It will in place on its own most of the time but sometimes it loosens up a bit during posing. 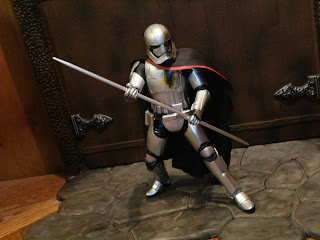 While she'll currently cost you a bit to import if you're not in Canada, this Captain Phasma figure improves on the original quite a bit. With a new headsculpt, a cloth cape, and two new accessories, Phasma feels like a pretty solid exclusive that doesn't feel too much like a soulless double dip. To be honest, I really like her. I'm not the biggest fan of The Last Jedi but the Phasma scene is one of the parts I really dig and this figure captures it quite well. Captain Phasma (Quicksilver Baton) is a Great figure and a cool addition to the Last Jedi offerings. Definitely worth waiting for until later this year when the Disney Store starts carrying her.