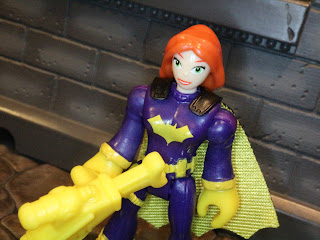 It's been quite some time since I last reviewed a Batgirl action figure but I was traveling last weekend and on a stop at a Target looking for the Star Wars: The Black Series Gamorrean Guard (no luck yet) I did manage to find the Unmasked Batgirl from the Imaginext: DC Super Friends series 5 blind bags. I haven't picked any of the blind bagged figures up before as I don't really collect these but you just know I had to track down Babs. Fortunately, some person with no patience came along before me and opened all of the bags, meaning that I didn't have to feel around for which bag Batgirl was in; it was easily visible! I don't advocate opening toys before you buy them but I certainly can sympathize with the frustration blind bags and blind boxes cause. They are downright evil and need a champion to stop them in their tracks. A champion like...Batgirl! By the way, if you're looking for this figure look for the stamped #67 on the back top left of the package. More after the break... 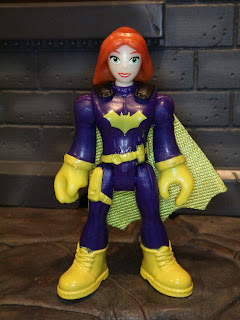 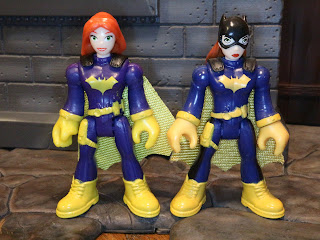 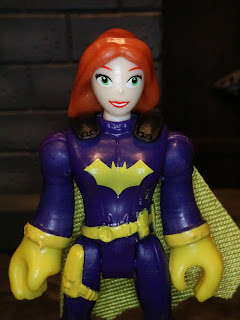 
* I love the look of this figure. I'm still a fan of the Burnside costume and this one captures it nicely. I also like the brighter purple and yellow of this figure over the original release. 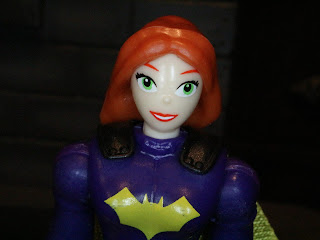 * My least favorite part of the original figure was the odd looking headsculpt. This version of Babs looks terrific, however. While it's still stylized with the Imaginext aesthetic, it looks quite a bit like Barbara Gordon's modern comic depictions. 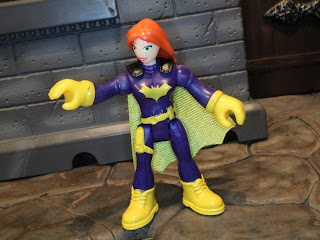 * Imaginext toys are really sturdy little figures that have an appealing look and are tons of fun to play with. They stand really easily (thanks to enlarged feet) and they're really great for kids just getting into action figures. Babs has the same articulation you'd expect from any other Imaginext figure except that her longer hair limits the swivel joint of her neck a bit. Otherwise, she's read for some great crime-fighting adventures! 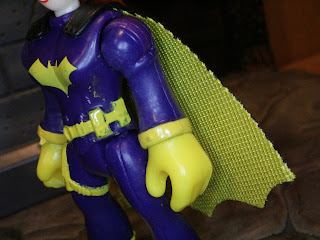 * The cape is not only a real fabric cape but it is double sides: The outside is black (for sneaking!) while the inside is yellow (for flair!). 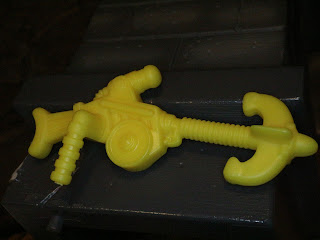 * Batgirl includes a grappling gun, a very fitting accessory for the character. Interestingly, this is a reused accessory from the first series of blind bagged Imaginext Collectible Figures. It was included with the James Bond-like Spy. I've never reviewed him on here, but it's a cool figure. Now, molded in bright yellow, it goes along with Babs swimmingly. 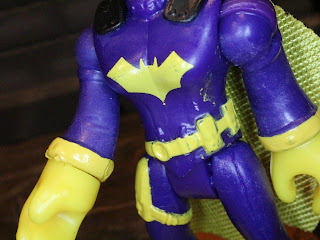 * I've got a couple problems here. First, the paint is kind of messy. I mean, this is probably the messiest paint I've ever seen on an Imaginext figure. Second, the figure looks kind of scuffed up. The collars of the gloves and the shoulders look really rough. What the heck, Fisher-Price? 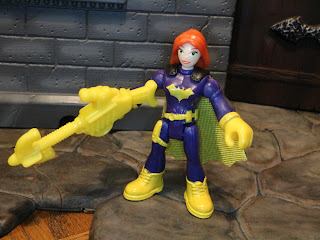 I really like this figure, particularly the brighter colors, the grappling gun, and the new headsculpt. I'm pretty disappointed by the messy paintwork and the weird scuffing on the figure, though. What gives? Still, I like the figure and the overall character selection here. Sometimes I think Imaginext does a better job with their character selection than the DC Multiverse line does. Remember, if you want this one she is part of series 5 and has the number 67 stamped into the foil package on the top left of the backside of the package.

I've reviewed so many Batgirl figures that she has her own review archive. Check out the Batgirl Library for more Batgirl reviews!