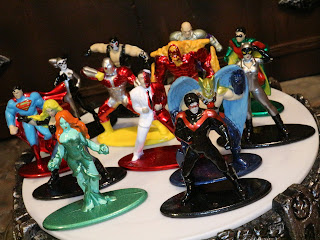 Yesterday a fellow collector and Nano Metalfigs enthusiast emailed me asking if I knew about this new 20-pack of DC Nano Metalfigs from Jada Toys (thanks, Joe Mama, if that is your real name!). I had heard about it and, in fact, I've actually had this one sitting around for a few weeks. Today seems like as good a time as any to review it, huh? It's no secret that Jada Toys' DC Nano Metalfigs line is one of my favorite toylines out there right now.  There's just something I love about it and Jada keeps putting out some cool releases. As of this set's release we are up to 113 unique figure releases for the DC line which is pretty cool. Of course, there are lots of variants and repaints in this series and this 20-Pack shows off how those repaints can turn out to be really, really cool or really, really dull. Sadly, the set only features one all knew sculpt, Nightwing. I'm sure we'll see him again down the road somewhere, but for now this is the only way to get him. Let's check this set out after the break... 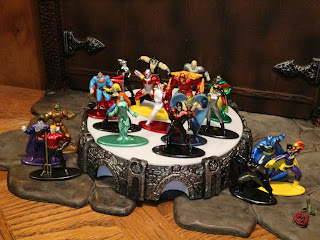 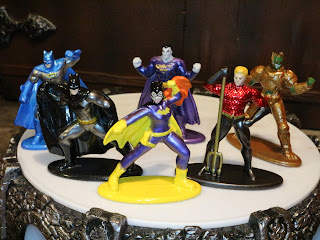 *Of the 20 figures in this set, six of them are straight repacks that have been offered one or more times. These repacks are Parademon (DC24), Batman (DC39), Batman (DC40), Bizarro (DC41), Batgirl (DC42), and Aquaman (DC46). These are all solid figures but a few of them like Bizarro, Batman, Batgirl, and the Parademon have been offered in multiple multipack, so any collector of the line probably already has some of these. 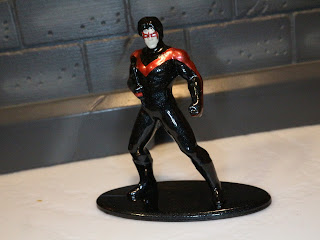 * Nightwing is an all new figure in this series and he's pretty cool. He's clad in his New 52 outfit with the red highlights and is carrying one of his escrima in his hand. I really want to see this figure released in his blue costume sometime soon. 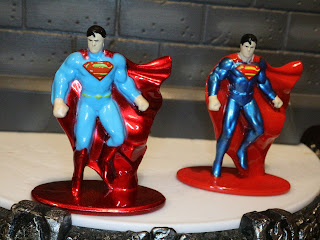 * The following 13 figures in the series are all repaints of varying quality. First up is this Superman, a repaint of Superman (DC3). I still dig the hovering pose and I like the metallic cape and boots. I'm not sold on the light blue color scheme, though. Maybe on a very classic looking Superman figure but the baby blue just doesn't work here at all. 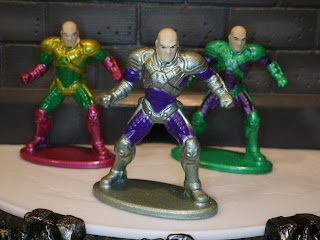 * This new Lex Luthor is a simple repaint of Lex Luthor (DC99) on the left and Lex Luthor (DC27) on the right. This isn't a terrible repaint, as I like the muted green color chosen, but the inclusion seems unnecessary considering that it's another green and purple Lex Luthor in his armor. 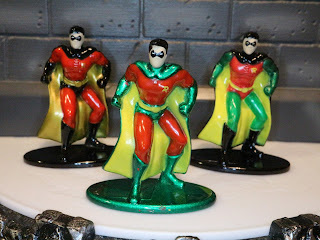 * This sculpt has been released previously as Robin- Tim Drake (DC56) on the left and in the Batcave set as Robin (DC26) on the right. I'm always OK with a decent costume variant but this one's a bit off. Has a Robin costume ever looked like this? The colors are just... not in the right places. If you can identify it, let me know. (Thanks to Jualrus who pointed out that this looks like Jason Todd's first Pre-Crisis costume!) 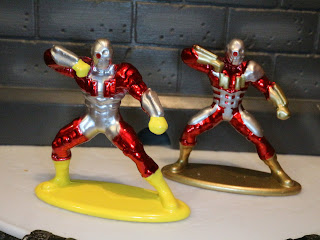 
* A repaint of the Deadshot (DC58) figure on the right, this figure has some pretty minor changes such as more silver, less red, and yellow boots and gloves. It has a bit more of an 80s era vibe to it, so I kind of dig it. Not necessary but fun. 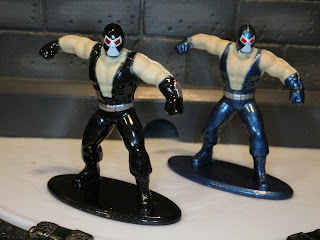 * Another repaint that seems pretty minor but actually works better than the original, Bane is based off of Bane (DC59). I really like Bane's black outfit here and he's now my preferred Bane of the two available in the line. Maybe someday we'll get a Tom Hardy Bane? 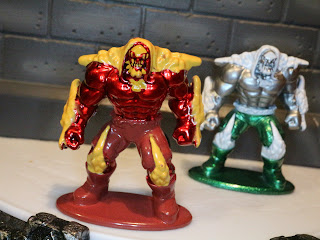 * Here's another really cool repaint, possibly one of the best in the set. This red Doomsday is a repaint of Doomsday (DC50) but he looks so much more dynamic and explosive. While he doesn't work as a standard Doomsday for your display he does make for a cool backup version. 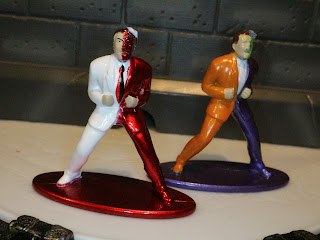 * Two-Face is another excellent repaint. Wearing a white suit and sporting a red burned face, this Two-Face is quite different from the DC29 Two-Face from earlier in the line. I like this his tie is nicely painted and even split down the middle as well. One of the best in the set! 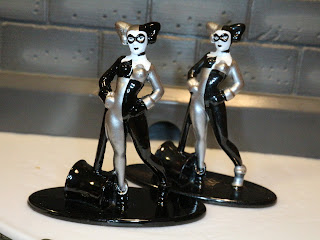 * And from one of the best to one of the lamest... this Harley Quinn looks nearly identical to the DC55 Harley Quinn pictured on the right. So, can you spot the difference? Go ahead, try! Give up? The new Harley has a black left boot while the previous release has a silver left boot. Why did Jada Toys decide to actually make these two separately numbered releases? 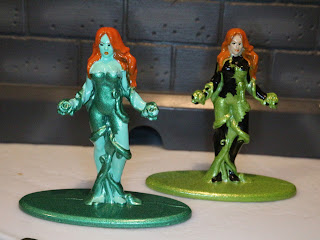 * Now, back to the really good repaints. The new more traditional Poison Ivy looks pretty fantastic. I love green skinned Ivy and this is an excellent rendition of her. Heck, without looking at these two side by side it is kind of tough to tell they are the same figure. Easily one of the best in the set and a figure that provides a nice counterpart to Poison Ivy (DC45). 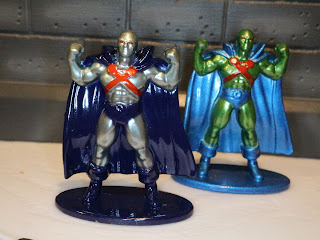 * I know the shade of Martian Manhunter's skin tone changes a bit from time to time but isn't this one a bit too gray? It's not a terrible figure or anything (it actually looks pretty cool) but it'sjust a strange choice. The metallic blue looks really killer, though. 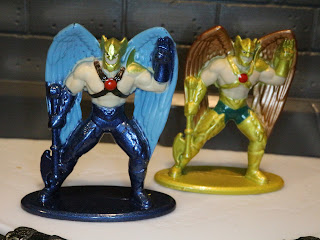 * I'm not the biggest expert on Hawkman but where is this color scheme from? It's clearly a repaint of the DC47 Hawkman but the paint scheme is so specific that it makes me wonder if it's based off of a particular look from the comics though nothing comes to mind. I really wish he had been repainted with some classic Hawkman colors even though this is a more modern outfit. 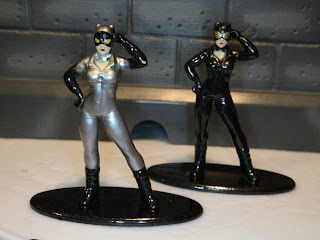 * The next repaint is another pretty cool one: Catwoman in a silver/ gray suit. This one reminds me quite a bit of the Batman: The Animated Series depiction of the character. She's a bit more detailed than the Catwoman (DC44) figure on the right which is a plus. 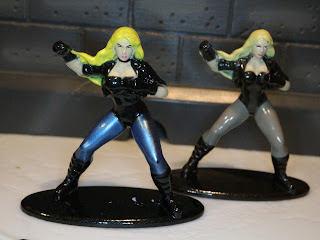 * Last, but not least, is the repainted Black Canary. Decked out in her classic blue tights (rather than the fishnets of the DC62 Black Canary) this one actually represents a different era for the character. Like figures above such as Deadshot and Bane, it's a small change but it works. 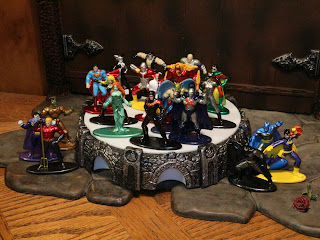 Remember that these figures are still only a buck each, so that's still a pretty good price and makes this an attractive pickup as a gift for a kid or collector who digs DC Comics. Of course, for someone collecting this line you're going to end up with six straight repacks and a few repaints that are kind of dull. I feel like the good outweighs the bad here, but it's still not a home run of a set. It's Good but definitely more for the hardcore collectors of this line rather than the casual buyer. This was the most recent DC Nano Metalfigs item Jada Toys showed off at SDCC so hopefully we'll hear about something new soon. They have lots of other Metalfigs lines coming out but who knows how long those ones will last? The DC license should always have long legs and could easily produce one hundred more solid character choices for the line.


If you're looking for more Parademons I have reviewed the Nano Metalfigs Parademon from the series 1 5-Pack A and the series 4 5-pack A and DC Comics Multiverse: Justice League Parademon.

I've reviewed so many Batman items that he has his own review archive. Check out the Dark Knight Gallery!

If you've ever read this site you know Batgirl is my favorite. I've reviewed so many Batgirl figures and collectibles that she also has her own review archive: The Batgirl Library!

I've reviewed a few other Robin figures based on the various characters who have worn the costume. I've looked at the Lego Arkham Asylum Breakout which included a Tim Drake Robin as well as the Multiverse Damian Wayne Robin, DKR Carrie Kelly Robin, and Duke Thomas in his "We Are Robin" gear, as well as the Nano Metalfigs Robin that comes with the Batcave playset and the DC56 Robin- Tim Drake.

If you're looking for more reviews of Dick Grayson/ Nightwing stuff, I've also looked at the Lego Batman: Man-Bat Attack which includes Nightwing, the Kenner Legends of Batman Nightwing, the DC Icons Hush Nightwing, and the New 52 Nightwing.

I've reviewed a few other Bane items including the Arkham Origins Bane from DC Collectibles, Lethal Impact Bane from Kenner's Legends of the Dark Knight line, and the Nano Metalfigs DC59 Bane.

While he's a major baddie, the only other Doomsday I've reviewed on here is the Nano Metalfigs DC50 Doomsday.

I'm such a big Harley Quinn fan that she too has her own review index: Check out the Harley Quinndex!

The only other Hawkman figure I've reviewed on here is the Nano Metalfigs DC47 Hawkman from the series 3 10-Pack.