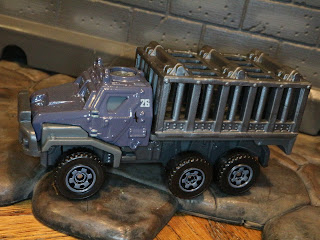 While it's not spooky or anything, I still am going to be reviewing another Jurassic World vehicle today as I have a few left that I hadn't checked out yet. Today I'm looking at the Armored Action Transporter, a vehicle Mattel has apparently made up for the Matchbox toyline. While it is based on the Armored Action Truck/ BAE Systems Land & Armaments Caiman, this particular design seems to be just a creation that looks like it could have been "just off screen" during the scenes on the island in Jurassic World: Fallen Kingdom. Let's take a look at this cool transport truck after the break... 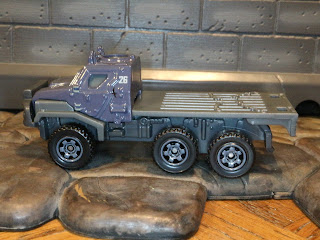 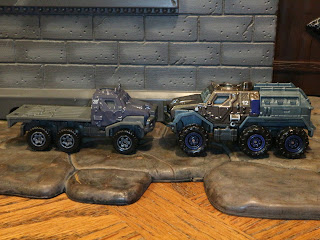 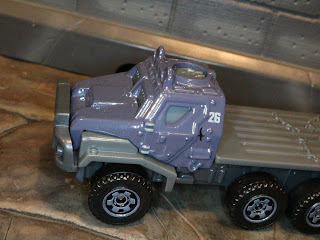 * The cab of the truck has a #26 stenciled on the side and the outline of a pteranodon. The cab is smaller and less detailed than the standard Armored Action Truck but it is still a pretty solid little vehicle. 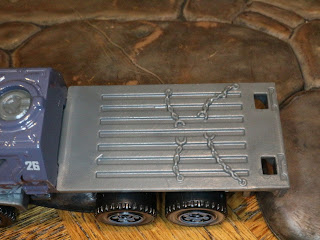 * Like the Off-Road Rescue Rig, the Armored Action Transporter also has a removable cage structure on the bed of the truck. Take off the cage and you can see four chains sculpted onto the flat bed. It's not insanely impressive or anything but it is a fun little extra I wasn't expecting. 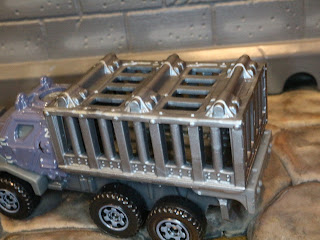 * Here is the cage that snaps onto the back of the truck in order to allow for some dinosaur transporting action. It's just plastic but it has the look of real metal thanks to the silver plastic. 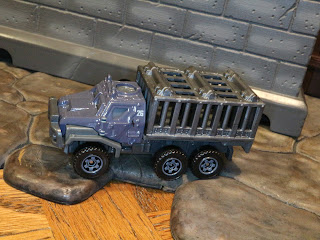 I really like this one. It's not "film accurate" but it is a cool concept that seems like it could have easily been on the screen. I also dig the removable cage as it reminds me so much of the old Matchbox Jurassic Park: The Lost World vehicles with the working cages and such. It's a nice looking vehicle and a Great little toy for about a buck. If you're digging these Jurassic Park vehicles or just like movie based cars and such, you'll probably dig this one.