A Short Tribute to Monster Party 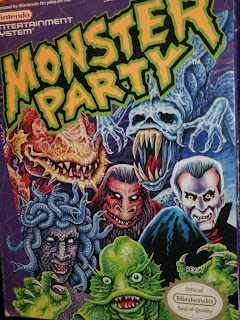 Today I want to spend a few minutes paying tribute to one of my favorite Nintendo games of all time: Monster Party! Released by Bandai for the Nintendo Entertainment System in 1989, Monster Party is one of the strangest, and possibly one of the best, NES games released. I've recently hooked up my original NES again and had the chance to play the game for an hour or so which reconfirmed my nostalgia that Monster Party is indeed a pretty decent video game. It plays a lot like Castlevania due to its theme, use of a life bar, and reliance on fighting bosses and some mild exploration, but instead of a whip swinging vampire hunter you play as Mark, a baseball bat toting average kid who is tasked with helping a winged alien named Bert rid his home world of monsters. It's a side scrolling platformer with a few unique twists as Mark can use his baseball bat to knock most enemy projectiles back at them and a magic pill of some sort allows you to play as the flying alien Bert who can fly over most of the level and shoot energy projectiles. The game is legitimately fun to play and has a password system so you can actually finish it.

Of course, the game is also legitimately creepy. Weird music, bizarre and frightening bosses, and insanely weird stages definitely give this game some atmosphere. Some times the game is truly frightening (halfway through the first stage the world morphs from a forest into a world of blood and bones with a audience of corpses watching you), sometimes it is humorous (one boss is a giant spider who informs you that he is already dead while another is a giant cat who throws her kittens at you), and other times i is just bizarre (one of the bosses is a trio of fried foods such as a piece of shrimp and an onion ring while another is a pair of zombies who just want you to watch them dance). It's always unique, though, and you'll truly want to see what other weird stuff pops up in each level.

The box art is also incredible. That's my original box up there and I have it on display because it is a thing of beauty. It reminds me of the Castle Grayskull dungeon grate due to its amazing color and variety of creatures. We've got a giant carnivorous plant, what appears to be either some sort of ghost or a corpse version of a Xenomorph from Alien, Dracula, a very unfriendly looking Bigfoot type creature (or the Chinese Wildman from Big Trouble in Little China), the Gillman, and Medusa. That is suitable for framing! If you've never heard of this game check it out. Watch a play through or check out the bizarre history of it online (there are some cool stuff cut out of the original Japanese version of the game). It is definitely one of the more unique NES games that still manages to be quite playable, too. I remember it creeping me out as a kid when my dad brought it home in 1989 (I would have been 5 or 6 at the time) and I still enjoy playing it from time to time! Monster Party is definitely due for a revival, wouldn't you agree?